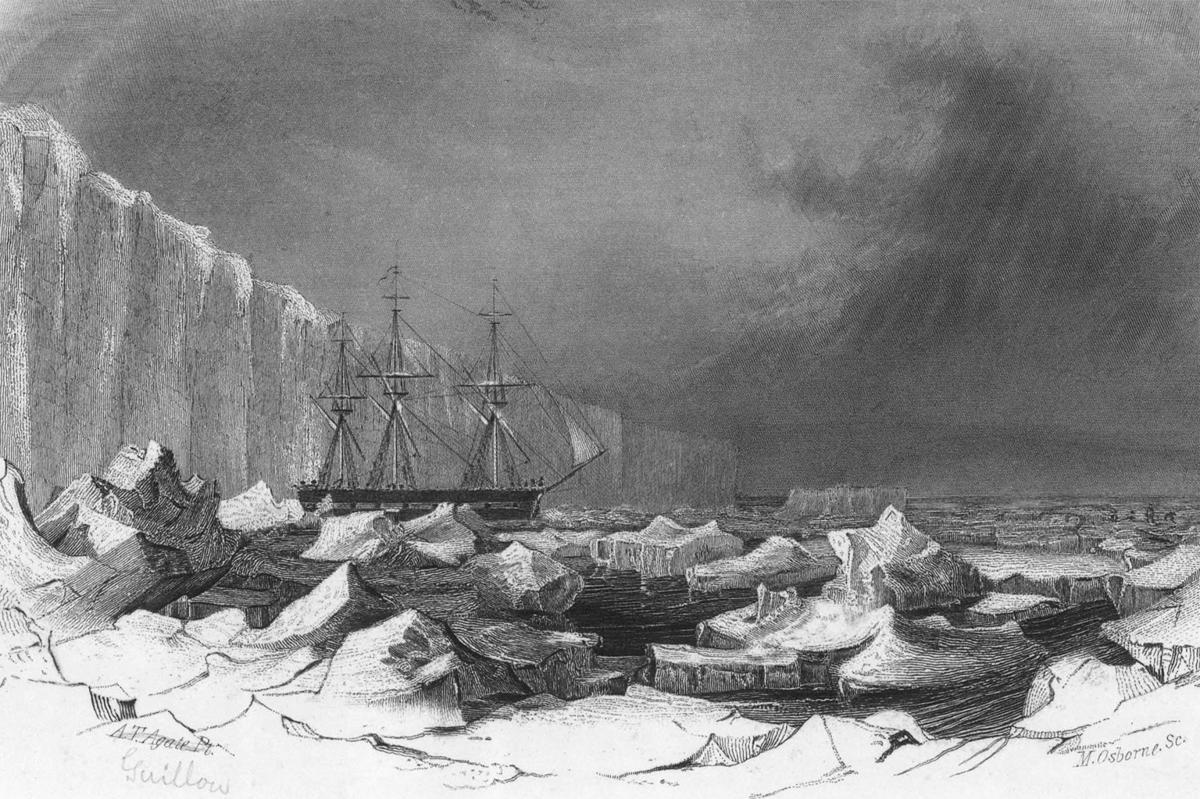 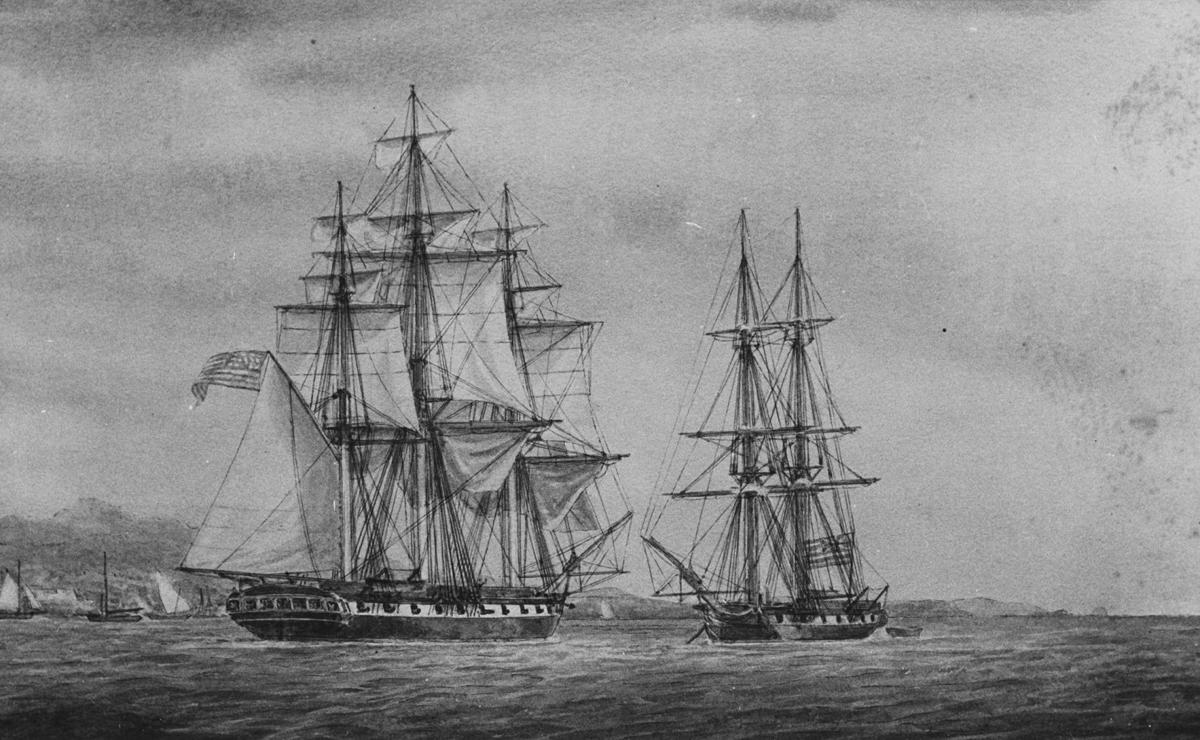 The U.S.S. Peacock attacking the H.M.S. Nautilus just after the War of 1812, which the Peacock’s skipper was unaware had ended, in 1815.

The U.S.S. Peacock attacking the H.M.S. Nautilus just after the War of 1812, which the Peacock’s skipper was unaware had ended, in 1815.

With all the ships that have come to grief there over the years, and all the sailors who have drowned as a result, it’s a little ironic that the shipwreck that gave Peacock Spit its name was as uneventful as it was.

But then, the only reason the U.S.S. Peacock didn’t break into pieces and drown all hands within hours of slamming into the sand was that it was a United States Navy ship. That meant it was crewed by some of the best-trained sailors in the world, and built solidly enough for iron shot to bounce off its sides.

Peacock spit isn’t actually a spit, in the common sense of the word. Rather, it’s a spit-shaped sandbar running about half a dozen miles out into the sea on the north side of the mouth of the Columbia River. It’s essentially invisible; the ocean waves crossing it look just like they do everywhere else in the sea; but instead of the ocean being 30 or 40 fathoms deep there, it’s 10 or 15 feet.

This is, of course, a big problem if you’re in a ship that draws 16 feet of water. Also, that water depth may not be of much use to your ship, but it’s plenty deep enough for you to drown in.

On the day that the U.S.S. Peacock slammed into the spit, the spit as yet had no name. In fact, it wasn’t even a known threat to navigation. It was July 17, 1841, mariners had as yet very little experience with the dangers of the Columbia River Bar.

After the war was over, the Peacock patrolled the seas battling with pirate ships and interdicting the slave ships that continued furtively crossing the Atlantic in defiance of the 1807 law outlawing the trade.

She was hauled into dry dock and completely rebuilt in 1828 — according to one source, the hull was literally replaced with brand-new wood. At the same time, she was reduced to 10 guns and refitted as an exploring ship. Then, the Navy sent the little warship out on less colorful, but arguably more interesting missions — mapping the world’s trade routes and exploring distant islands. This was the early Victorian period, the 1820s and 1830s, and it was the great age of Naval exploration — Napoleon was defeated, the world was mostly at peace, and Navy ships, in lieu of fighting wars, fanned out across the globe mapping and surveying and exploring, staffed with both warriors and scientists. The H.M.S. Beagle, the 10-gun brig on which Charles Darwin visited the Galapagos Islands, was one of these. The U.S.S. Enterprise, on the 1966 television show Star Trek, was clearly inspired by this era, with Science Officer Spock standing in for Darwin and deep interstellar space for the unknown waters of the South Seas.

It was on one of these exploratory-and-scientific missions that the U.S.S. Peacock stood out from Oahu, in what was then known to American and British sailors as the Sandwich Islands, bound for Fort George — the port city we know today as Astoria.

The Peacock’s captain, Lieutenant William L. Hudson, had been given specific instructions for crossing the bar by another skipper in Oahu. As he approached the shore, he made out the cliffs of Cape Disappointment, and set about following the directions he’d received. And all seemed to be going smoothly, until he saw what looked like breakers just ahead of the ship.

Assuming he’d gotten something wrong, Hudson dropped off the wind and sailed northward until the sea was no longer breaking. Then he brought the ship back landward and resumed following his directions.

Only, of course, now he wasn’t heading toward the mouth of the river at all.

The breakers Hudson saw were most likely combers breaking across the sides of the channel just offshore from the bar, caused by the tide ebbing out into the teeth of the incoming sea. By sailing north until they stopped, Hudson had taken the Peacock out of the channel and into the innocuous-looking waters over Peacock Spit.

A little later, the inevitable happened: The Peacock struck bottom, about four miles west of shore.

The crew scrambled to try to get the ship turned around before she stuck fast. But it was not to be — the ship struck again, and again, and the wind and sea started pushing her broadside to the swells.

Hudson ordered his first mate to launch the cutter and take soundings around the ship. While he was doing that, the wind picked up; a summer squall was developing, with gusting winds and even some hail. The tide was still ebbing, and suddenly those “breakers” were picking up the Peacock and slamming her against the sandy bottom as the cutter crew scrambled to get back aboard the ship before their little boat swamped and sank.

What followed was a desperate scramble to keep the ship pointing into the seas as they pounded down onto the pinned and doomed ship, slamming her again and again onto the sandy bottom. At one point, an anchor chain broke, causing the Peacock to swing broadside to the combing seas, and most of the crew likely figured they were done for.

But the United States Navy has never much gone in for delicate ships, and the Peacock was no exception. She held together as the crew put out a new anchor and dumped weight off the stern, so that the wave action would swing that end around and head the ship into the seas again.

Then ebb tide was over, and night fell.

In the early morning hours the next day, ebb tide came again, and even bigger combers started thundering down on the pinned ship, great walls of green water that carried all before them. The larboard bulwarks were breached, and the spar deck flooded. It seemed inconceivable that the ship could survive the pounding it was taking — surely the Peacock was about to break apart, four miles from land, and drown all hands in this raging sea.

But it didn’t happen. The Peacock toughed it out, and when dawn came, and with it the end of the heavy ebb, they lost no time in starting the process of launching lifeboats.

They got the first group of three boats off relatively easily. But by the time they returned for more survivors, the seas and currents had picked up again — probably the next ebb was starting — and they couldn’t reach the ship. They tried several times, until Hudson, worried they’d lose one or more of the boats in the attempt, ran the ensign up the mizzen mast as a signal to break it off.

Then came the full ebb-driven pounding once again. Hudson ordered the masts cut away — by now he surely knew well the ship would never sail again — to reduce the pounding. He knew if the ship could just get through this one more round of ebb tide, he and the rest of the crew would likely make it.

Luck — along with fantastic ship construction — was with them. The end of the ebb found the Peacock still wallowing in the sea,

battered and full of water, but still intact.

And now, well after sunset, the lifeboats were finally able to get to the stricken ship and rescue the remaining crew members, along with Hudson, her captain.

For the exhausted, shivering mariners, the four-mile rowboat run ended with a reunion with their shipmates around roaring fires that the sailors had lit on shore to warm themselves. The sailors had also built several brush huts to sleep in, and two Methodist missionaries and a Hudson’s Bay Company agent from Fort George had arrived with food and drink and other supplies. It’s a good bet most of them had never seen such a welcome sight in their lives.

Hudson and his shipmates barely got off the ship in time. When they rowed back out to the scene of the shipwreck, hoping to salvage some other things from the Peacock, they found that that last round of ebb-driven combers had finally broken the ship apart. All that was left, sticking up out of the sea, was the cap of her bowsprit. Over the next few days, this, too, sank into the sand of the spit — where the keel and timbers of the Peacock remain to this day, rotting quietly away, having become a part of the invisible peninsula that today bears the Peacock’s name.

As for the crew, they were evacuated to Fort George, and the Navy purchased the brig Thomas Perkins as a replacement. On this ship (which they renamed the U.S.S. Oregon) the crew continued their mission.

(Sources: Howerton, Norman A. “Untold Story of the Peacock, Wrecked in 1841,” an article by Norman A. Howerton published in the June 1942 issue of Oregon Historical Quarterly; “U.S.S. Peacock,” an article by Haley Best published on 07 Mar 2019 in The Oregon Encyclopedia)

Finn J.D. John teaches at Oregon State University and writes about odd tidbits of Oregon history. His book, Heroes and Rascals of Old Oregon, was recently published by Ouragan House Publishers. To contact him or suggest a topic: finn@offbeatoregon.com or 541-357-2222.