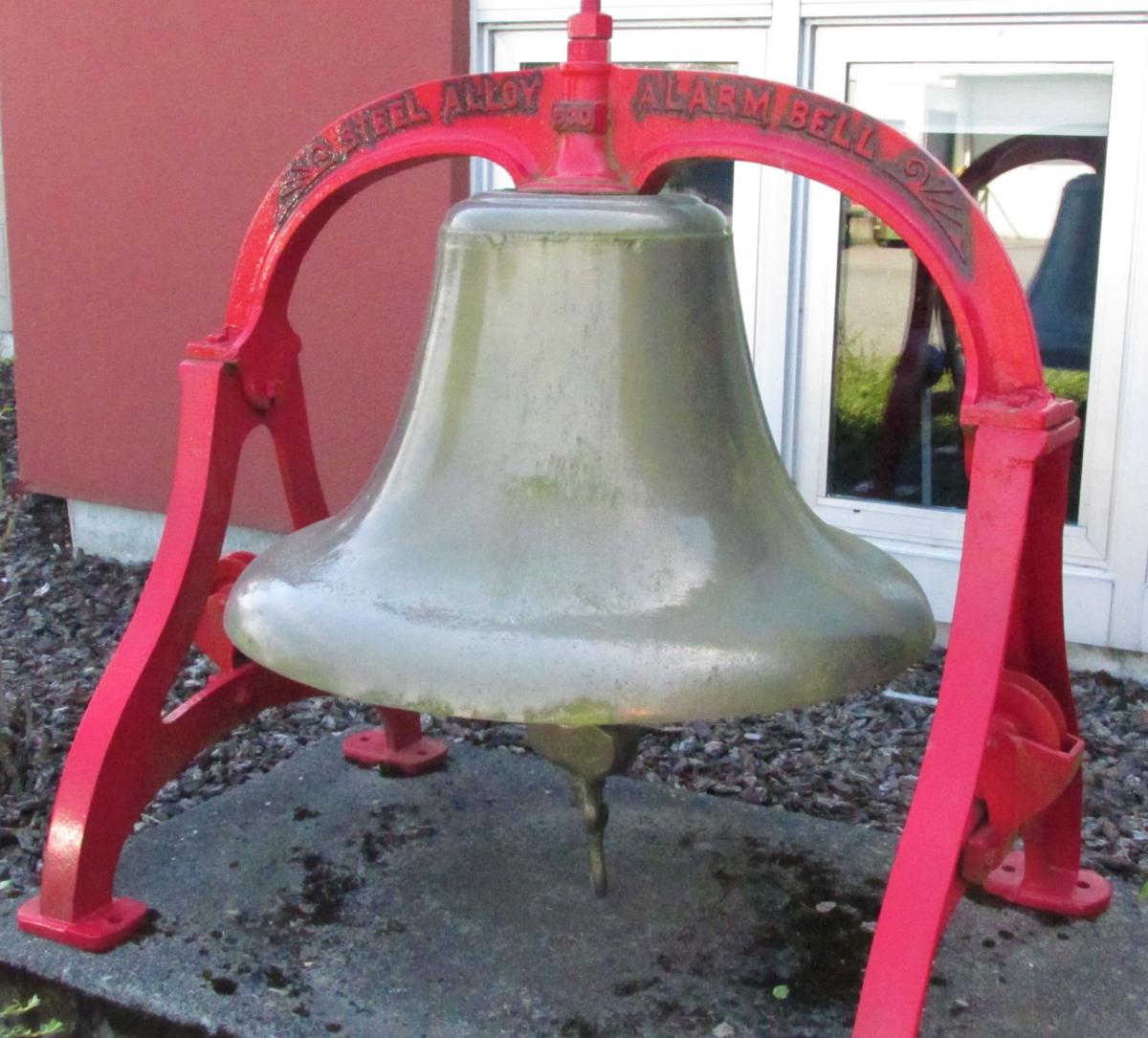 This is the Big Bell at the Columbia River Fire & Rescue Station at 105 S. 12th Street in St. Helens. It is one of several large community bells that will ring on Independence Day. 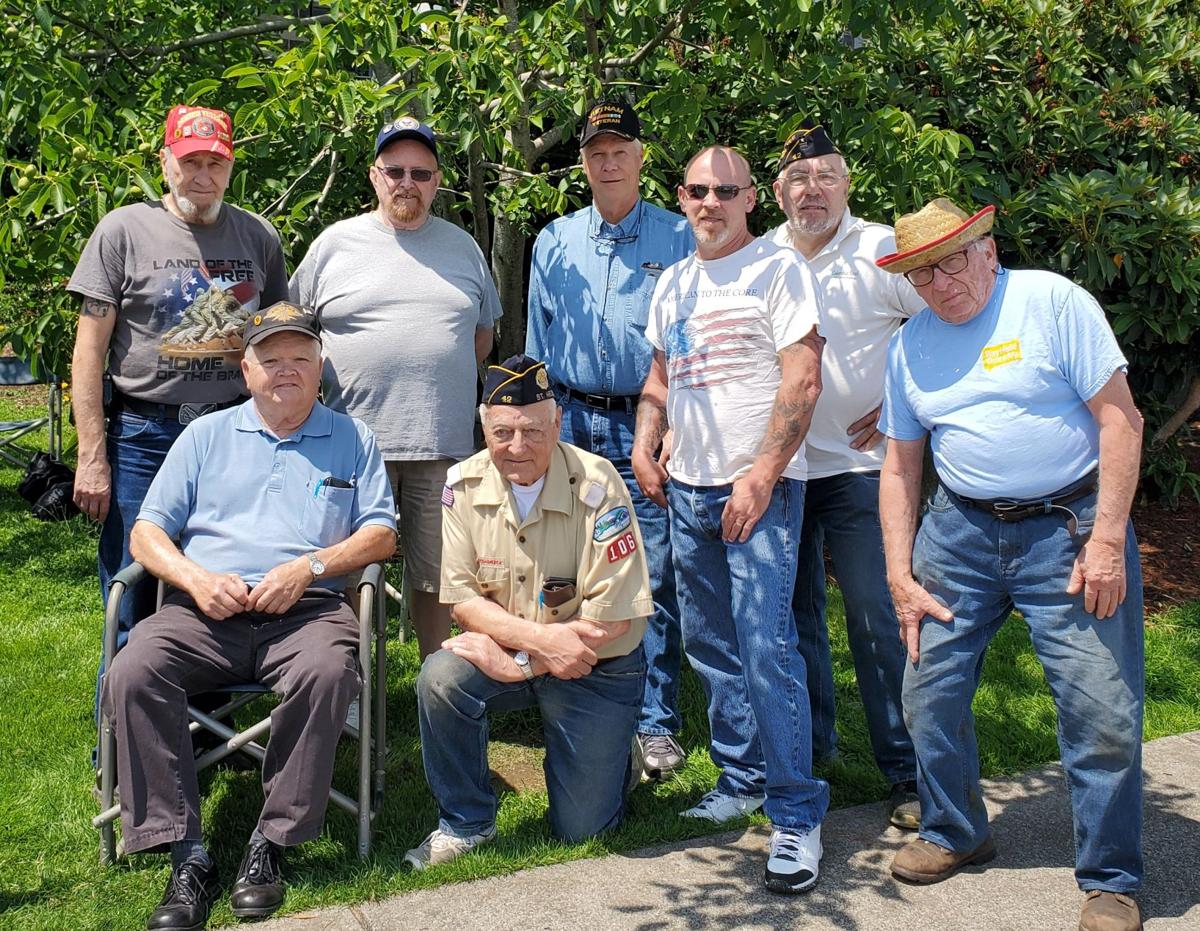 This photo from the 2019 Let Freedom Bells Ring' celebration is a combination of American Legion Post 0042 members, the Boy Scout Troop 106 and on the very right end is Steve Topaz, one of the main organizers.

Each year since it began, the Independence Day celebration has members of the American Legion Post 0042 ringing several large bells throughout the community to mark America's independence and freedoms. Organizer Judy Thompson said about 12 legion members ring the bells each Fourth of July. This year, the Boy Scout Troop 106 members have been invited to assist the bell ringers.

'Let the Freedom Bells Ring' are to honor those who protect our freedom, including veterans, service members, law enforcement, firefighters," Thompson said. "Recognizing freedom is not free."

Due to the state's social distancing requirements, one person and one big bell will synchronized to ring the bells at 2 p.m. at different locations in the  community.

President John F. Kennedy signed a proclamation in 1963 to bring back National Bell Ringing at 2 p.m., the time the Declaration of Independence was signed and bells were rung 13 times for each of the American Colonies.

Because of the COVID-19 pandemic and social distancing limitations, the traditional fireworks displays in St. Helens and other cities have been canceled.

Those events including, a Patriotic Car Decorating Contest, Merchant Window Decorating Contest, and The Columbia County Historical Society and Museum Association will be offering virtual tours of the historical downtown district via museum's Facebook page. The QR code for a self-guided tour is available on most smart phones.

Thompson said this is also the 75th Anniversary of World War II and “Time to Remember” will be the focus on this time in America's history and the local events also will celebrate America’s 244th Birthday.

Thompson said participating local merchants will set the tone for July 4 with a Decorated Window Display Contest. A $250 cash prize for best display will be presented by SHEDCO.

At 1:45 p.m. on July 4 at the old Courthouse steps, words of reflection will be spoken and the singing of The National Anthem will be conducted before the bells ring at 2 p.m.

"It takes less than a minute for all the bells to be rung," Thompson said.

The Columbia Theatre will offer popcorn sales commencing after the bell ringing. Thompson said this will give people the opportunity to participate in the Patriotic Car Decorating Contest that will be part of the drive-up sales at the theatre on 1st Street in the Old Town District of St. Helens.

Participates are asked to arrive with their vehicles already decorated to join in line for popcorn and ice cream sales. A bucket of popcorn is $5 and soft whip ice cream $4. There will be tickets randomly handed out for one free item.

All decorated cars will receive a participation ribbon and prizes for creativity.

"The line currently passes in front of the Courthouse, as you pass by the Courthouse you will be entertained by live music and an assortment of characters," Thompson said. "Be alert, Rosie the Riveter may be judging your patriotic auto."

"The certainty of Columbia County’s COVID-19 status may change by July 4 and some activities may not happen," Thompson said. "However, we can still “Let Freedom Bells Ring” anywhere we are, just stop and take a moment of gratitude for those of past, present, and future who protect our freedom."

Thompson said the bell ringing celebration began six years ago as a way to involve the community in an Independence Day celebration.

"My friend Steve Topaz and I were talking about how Independence Day should be more than drinking beer, potato salad and fireworks," she said. "So I looked online at other celebrations around the nation and I thought we should include our large bell tower at the courthouse with whatever we do."

Thompson and Topaz solicited members of the American Legion in the project.

"We asked the American Legion if we could honor them by having them ring the bells and they agreed to do so," she said.

Each year as the bells ring, Thompson said it becomes an emotional moment for her.

"It moves me," she said. "It gives you a moment to consciously reflect on our freedom. Our freedom is not free."

According to Thompson, the bell ringing isn't to replace the traditional Fourth of July fireworks, but rather an event designed to engage the entire community in celebrating America's Independence Day.

"It is more of a community event because there was noting else planned (due to the pandemic)," she said. "We are still going to do to bell ringing, no matter what. We wanted to design a celebration that would not have large crowds gathering and where people would feel safe and be secure and that we could have a community activity to honor our country."

Thompson said anyone can join in the bell ringing and they don't need to attend the specific large bell locations.

"The beauty is that you can ring a bell on your own, or honk your car hour, you don't have go anywhere to participate," Thompson said. "One year the boats that tie up at the dock honked their horns during the bell ringing. It is important for our community and our country to have this celebration."

Thompson said the bell ringing also should be an inspiration.

"Maybe it will make others think that they can do something like this," she said. "It is to get people to do things together. It's community engagement."

If you'd like to be a donor, or a character in the celebration, check the SHEDCO and Keep it Local Facebook for details and contact, Judy Thompson at  503-397-6056.

"It gives you a moment to consciously reflect on our freedom. Our freedom is not free."