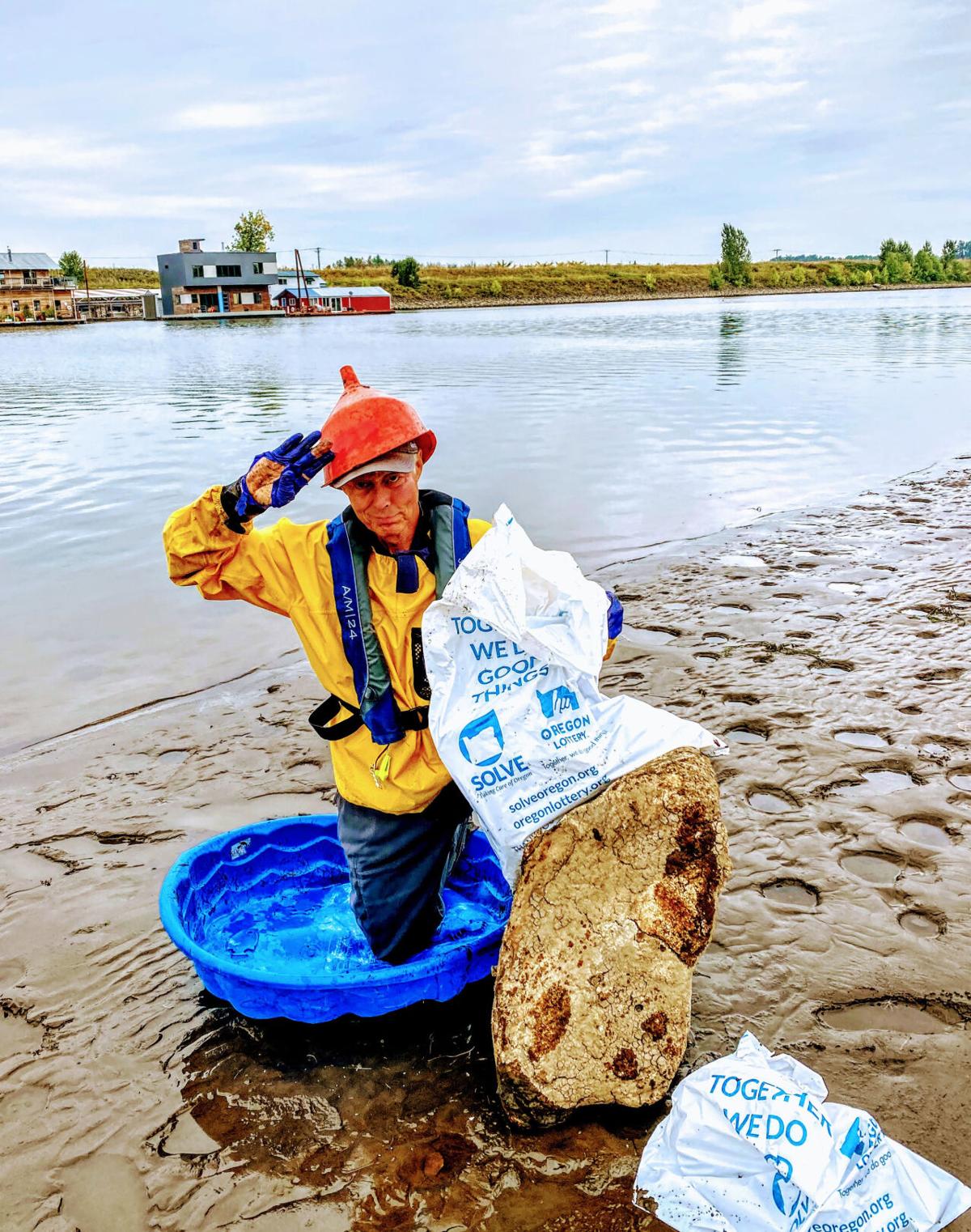 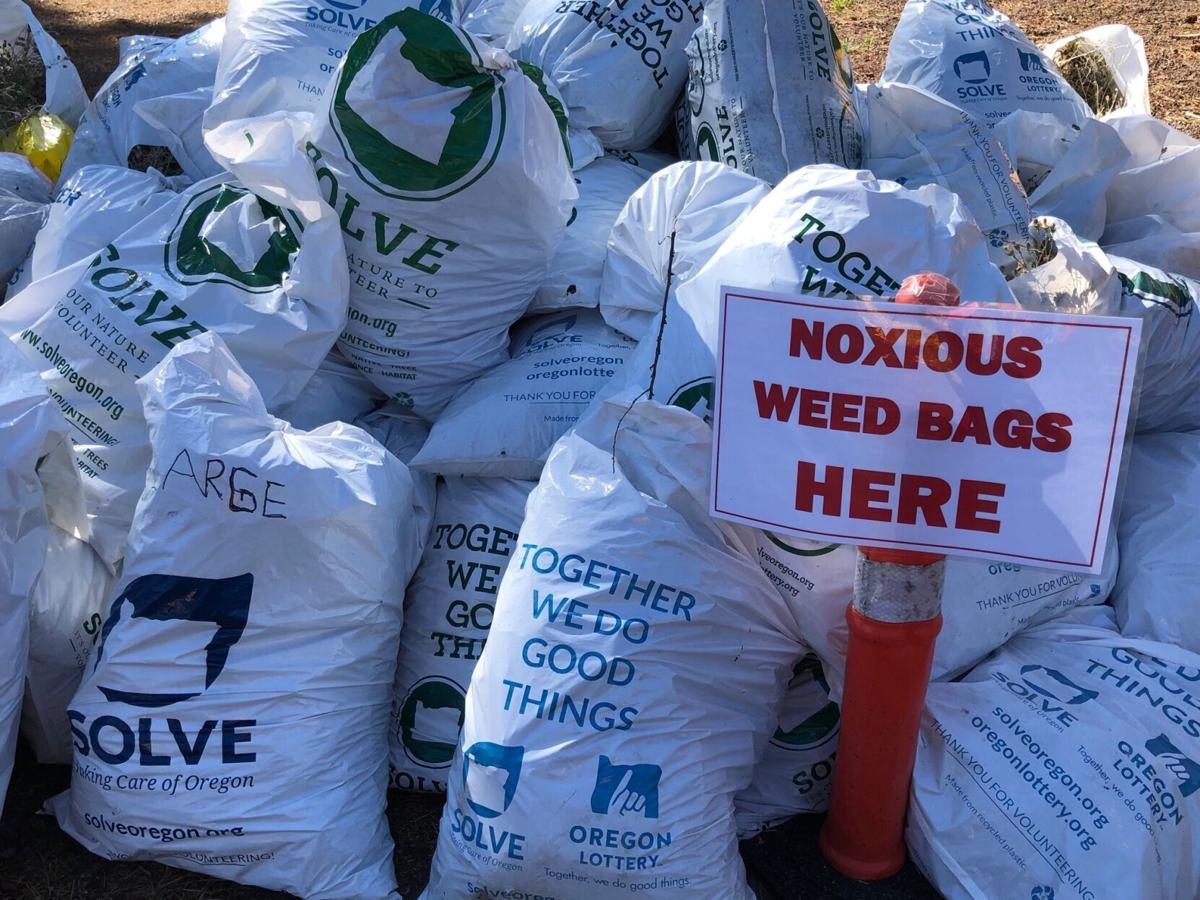 Large bags, such as these from a previous statewide cleanup, are used in the volunteer environmental effort.

Residents on the Multnomah Channel braved wet and windy conditions on Saturday, Sept. 18, for their 5th annual cleanup.

Organizers said 25 intrepid volunteers paddled and barged through the rain and wind.

Using four water bikes, a paddle board, three barges, and a skiff, they retrieved 2,740 pounds of trash, 13 tires, 20 full SOLVE bags of garbage, four buckets of glass, lots of metal, and all sizes of styrofoam.

Thanks to Kathleen Boultin-Pasterz, who waived the tipping fee again this year, the materials and debris collected all went to the Columbia County Transfer Station, according to the organizers.

The effort was part of a statewide cleanup from Sept. 18 through Oct. 3, in which Oregonians participated in SOLVE’s 38th annual Beach & Riverside Cleanup in partnership with the Oregon Lottery.

The volunteer event is aimed at improving the health of waterways through litter pick-up and restoration work. While this event spans three weekends, most volunteer projects occurred Saturday, Sept. 25.

Since the event began, over 2,000 volunteers have come together and collected 26,815 pounds of litter and marine debris from Oregon’s coast, rivers, waterways and neighborhoods, according to a release from SOLVE.

“For many Oregonians there was an even greater drive to participate in a statewide cleanup and restoration event this year,” the release state. “Droughts have persisted in western states through the summer months, sounding the alarm on the importance of taking care of our water as a precious natural resource.”

According to SOLVE, by removing litter anywhere, volunteers prevent pollution everywhere. Each piece of garbage or debris that is not properly disposed of poses a risk to the surrounding environment, wildlife and water quality. Litter is most easily transported by the wind into storm drains or waterways. From there, it can flow downstream, adding to our international marine debris crisis.

Volunteers gathered at more than 100 projects across the state to demonstrate their commitment to keeping Oregon’s waterways clean.

Along the Oregon Coast, the Heart of Cartm, a recycling and reuse organization, a new SOLVE beach captain in Nehalem Bay, collected more than 400 pounds of litter and marine debris from their project site. Jessi Just, the executive director of Heart of Cartm, then sorted through the collected items, looking for things that are on her organization’s “wish list.” These items will find new life in upcoming repair workshops and art classes, according to SOLVE.

The non-profit Washed Ashore also helped divert other collected items from the waste stream from three beach cleanups. As they have done for several years, members of the Washed Ashore Team drove along the Southern Oregon Coast, collecting items that can be reused in their nationally recognized art sculptures.

In Portland, more than 400 volunteers participated at various cleanup projects throughout the city. The project located in Portland’s Central Eastside saw more than 80 volunteers who removed 1,230 pounds of litter in just two hours. This cleanup targeted litter that if left uncollected would have a strong possibility of entering the nearby Willamette River. Among the items recovered were crab pots, couches, and river rafting equipment.

SOLVE is a statewide non-profit organization established in 1969 to improve the state’s environment and build a legacy of stewardship.

The Tillamook Headlight Herald contributed to this report.