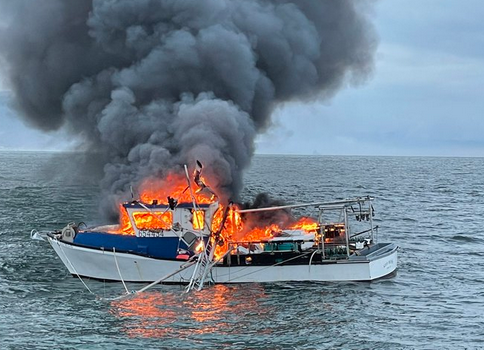 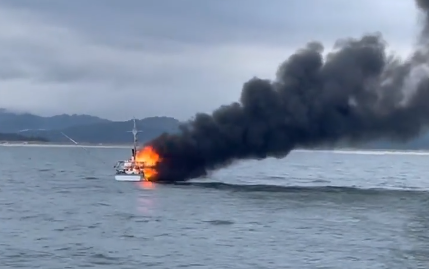 One person was rescued from this boat off the coast of Manzanita Beach Saturday, June 18.

According the USCG, one person was rescued from the water and transferred to shore with no injuries.

According to USCG Operations Petty Officer Arron Harris who is stationed at Tillamook Bay and was the driver of the rescue boat, a fisherman trolling in the area, rescued the distressed fisherman just before his boat was fully engulfed in flames off the coast of Manzanita Beach Saturday.

“The captain called in to report the fire had started in the stacks, then we lost contact with him as he started to fight the fire,” Harris said in a phone interview. “The next contact we had was when he was safely aboard the fisherman’s boat who rescued him.”

Harris said the fisherman reported to them, the fire started in the stacks, (stacks are similar to a chimney in a home), the fire quickly spread to the wooden cabinetry, and from there to the rest of the fiberglass structure. It took about five minutes to become fully engulfed in frames.

Harris said they received the distress call at around 6:30 a.m. and arrived on the scene a little after 7 a.m. "It took about a half-hour to get from Garibaldi station to about two nautical-miles off the shore near Manzanita," he said.

When the USCG arrived, Harris said, the fisherman was aboard the boat of the fisherman who came to his rescue, as both of them watched the flames and smoke billowing from the 42-foot fiberglass troller. The USCG crew brought the fisherman aboard the agency's vessel and back to shore. The man was reportedly safe and in good condition.

At around 8 a.m., the USCG crew sent out a  tweet, saying they would remain on scene to enforce a 1,000-yard safety-zone around the boat.

At 2:46 p.m., the USCG tweeted that the vessel had burned down to the waterline, and continued to smolder after drifting to about 1-mile west of Nehalem Bay State Park in Tillamook County. It is unclear at this time how the fire started in the stacks.

According to Harris, "the Coast Guard is handling this as a, 'Serious Marine' incident and will be working with Oregon Department of Environmental Quality (DEQ) to resolve the issue of any potential pollution from the incident."