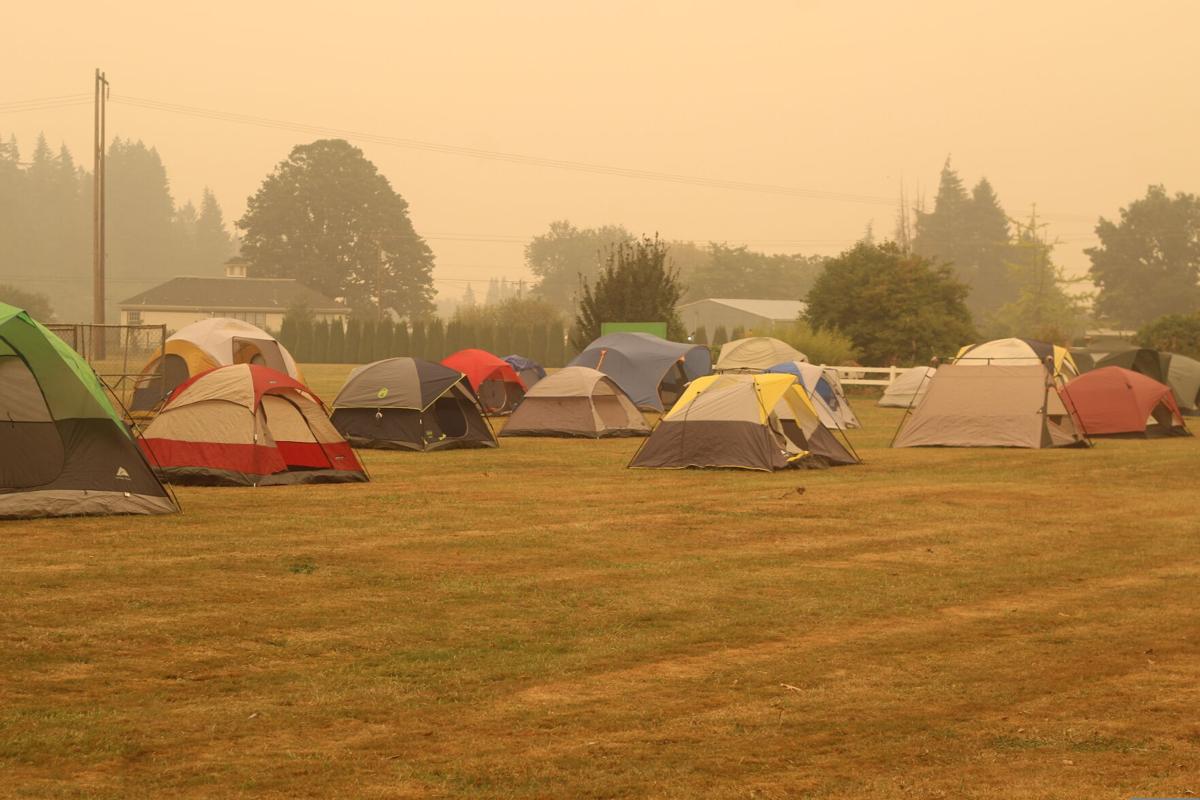 Tents were set up at the Columbia County Fairgrounds in St. Helens in September to house evacuees from regional wildfires. 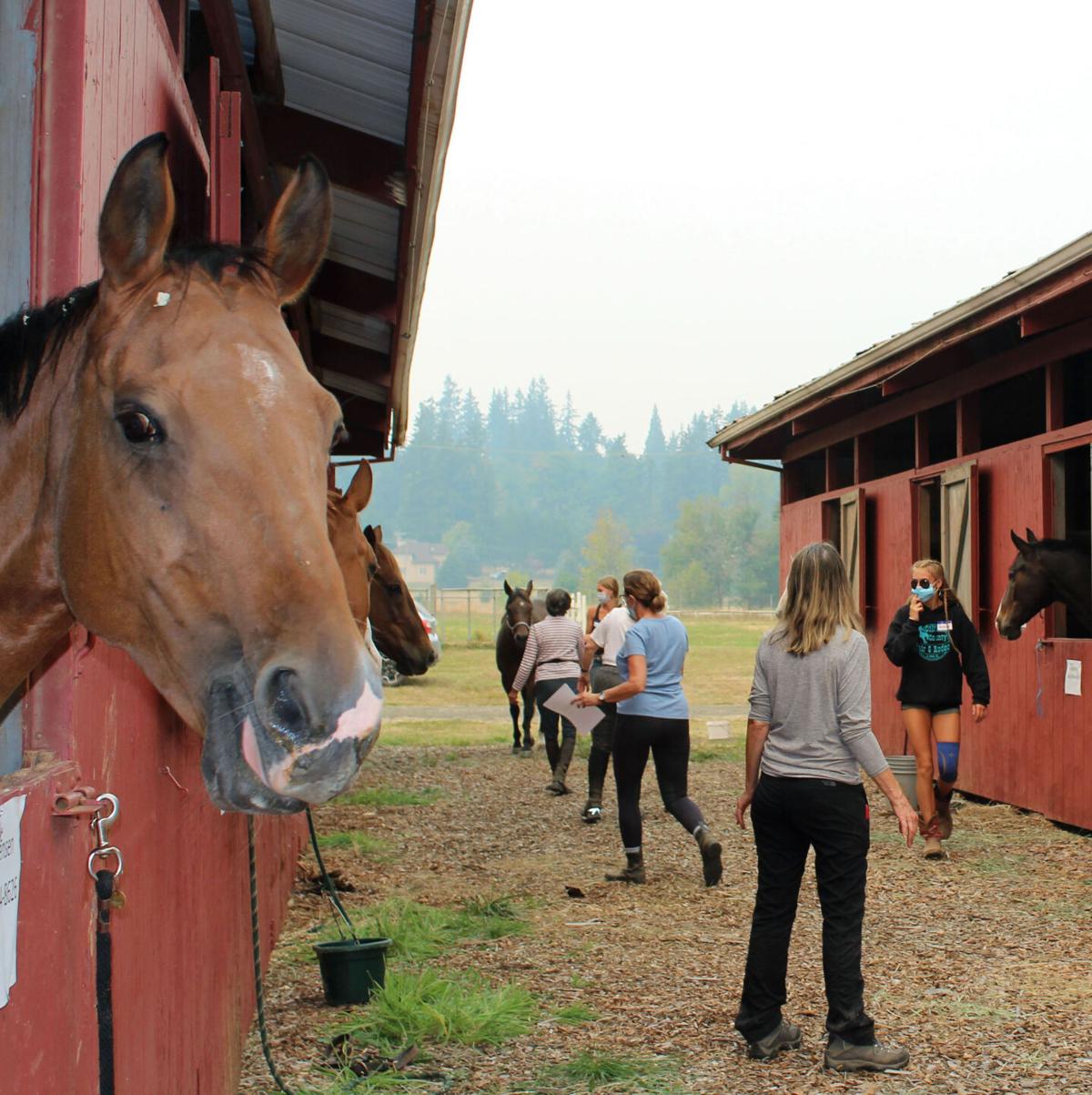 The Columbia County Fairgrounds was opened up to house evacuees and livestock displaced by regional wildfires.

It’s been a long year of canceled events and re-imagined celebrations, and the Columbia County Fair Board has felt the impact.

“We are financially struggling,” said Julie Pelletier, vice president of the Columbia County Fairgrounds Fair Board and vendor coordinator.

She said the fairgrounds projected a $40,000 loss in revenue over the weeks that the fairgrounds sheltered wildfire evacuees in September. The grounds are on Saulser Road in St. Helens.

“The loss was due to the fairgrounds not being available to incur any revenue during the emergency shelter situation,” she said.

The most significant financial disruption, however, came from the cancellation of the annual fair and rodeo, which brought in over $90,000 in revenue in 2019. It’s the largest event hosted on the grounds, and brings thousands of visitors each year.

Other events were re-imagined, like the annual plant sale hosted by the fair. The sale was held over the weekend in July that the fair and rodeo were originally scheduled on. The proceeds went toward the upkeep of the fairgrounds and brought in $24,000. Usually the sale brings in around $34,000, Fair Board President Jamie Carr previously told the Chronicle.

In addition to the plant sale, the fairgrounds hosted a drive-in concert in August. The fair board had scheduled another drive-in concert for September, but the spread of wildfires across the state changed those plans as they opened the grounds to shelter evacuees.

Now, the fair board is trying to keep financially afloat and bring money in while observing COVID-19 safety guidelines.

“It’s very difficult to host any type of fundraising, due to COVID,” Pelletier said. “With limited amount of people that can attend, we worry about breaking even financially; we can’t afford to lose any money.”

The best way to support the fairgrounds is to use them, she said. The fairgrounds are available for rentals, though COVID-19 guidelines still must be observed.

“It is very hard to keep the grounds operating financially under our current situation with relying on events and rentals to keep the budget in the green,” Pelletier said. “We suffered a huge loss not being able to have the fair.”

Instead of focusing on a large, weeklong event to bring in funding for the year, the fair board must shift toward a year-long, revolving-door rental model to keep the grounds in the green, and Pelletier is open to other ideas.

“If the public has any ideas for events or anything, really, please let us know,” she said. “What do you want, as a community, that we can provide?”

One source of recent funding to the fair board came in the form of a $15,000 donation from the Friends of the Fair nonprofit, but the fair board is uncertain about whether they can accept it or not.

The nonprofit was awarded a grant from Business Oregon’s emergency small business grants and the county matched the grant, which was administered by the Columbia-Pacific Economic Development District.

At the Columbia County Board of Commissioners meeting Wednesday, Oct. 21, that particular allocation of money was under discussion. Funding for the grant matches comes from the county’s share of Coronavirus Aid, Relief, and Economic Security (CARES) Act funding and in order to be reimbursed for spending used under the CARES Act, governments must follow certain rules on how funding can be used.

“If they’re simply giving the fair board the $15,000 without any strings attached, it could be considered a replacement for lost revenues, which isn’t a legible expenditure, so there’s a possibility we couldn’t see reimbursement for that 15,000,” said Tiffany Johnson, assistant county counsel.

The business grants were awarded based on the number of employees at each business. The nonprofit was listed as having between 11-15 employees, which accounted for the money it received and also made it the highest award given in that particular program. However, the nonprofit is run by volunteers and not employees.

Now, the county is unsure whether that money will be reimbursed because CARES Act funding is not intended to cover lost revenue, which the award could be viewed as since it does not have any employees— and therefore no wages to supplement.

Johnson said that had the Friends of the Fair used the money to help with next year’s rodeo, or buying equipment, it could be viewed as operating costs, but an outright donation isn’t allowable.

“It is a concern to us, we gave this money with the intent to help our business community,” Commissioner Alex Tardif said. “The largest grant was given to a nonprofit with 11 employees who don’t exist.”

The county can choose to either rescind the award and put the money towards something else that would be covered under the CARES Act, or it can give the nonprofit $15,000 from another fund.

The fair board will be discussing the donation at its next meeting in November.

“The reimbursement of it is of interest to us,” Commissioner Margaret Magruder said. “If those funds are not reimbursed, it leaves us with a hole— or an opportunity, depending on how you look at it.”

Although the 105th annual Columbia County Fair & Rodeo will not happen this year, there …

The Columbia County Fair & Rodeo will be celebrating a 105-year tradition this summer.

“We are financially struggling.”