The financial challenges continue at Eisenschmidt Pool in St. Helens.

Pool General Manager Anne Sholz is hopeful for some relief by the St. Helens City Council. On April 21, Sholz delivered a letter to the council during its regular afternoon work session requesting financial leniency for the pool’s water bill. 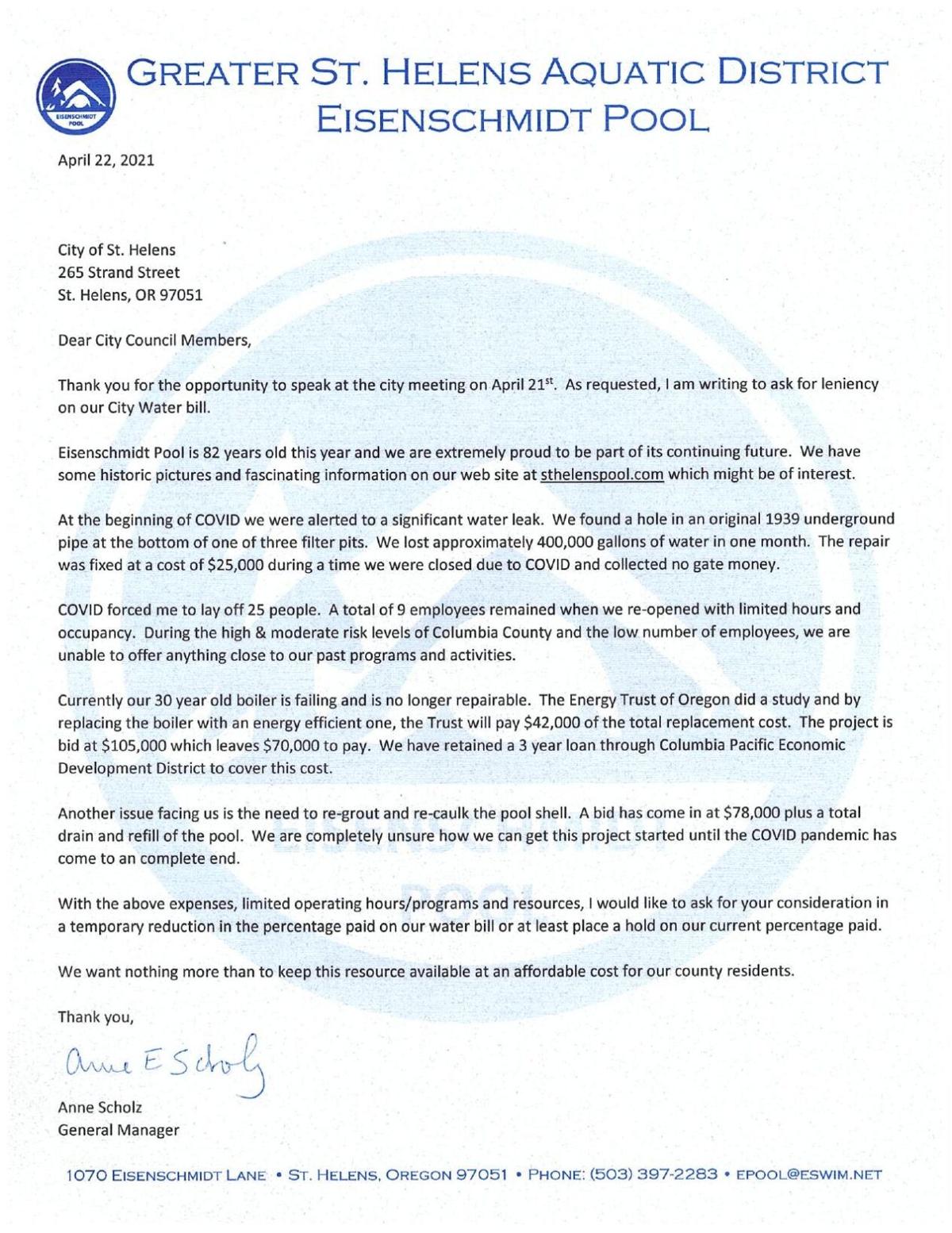 The council agreed to take up the request at its May 5 work session.

The pool, located at 1070 Eisenschmidt Lane in St. Helens turns 82 this year, but its survival has been tenuous in recent years, especially since COVID-19 forced Sholz to close the pool, and lay off 25 employees.

“A total of 9 employees remained when we re-opened with limited hours and occupancy,” Sholz said in her letter.

Sholz is also in the process of replacing the pool’s boiler, a $105,000 project of which The Energy Trust of Oregon is paying $42,000, leaving $70,000 for the pool to pay through a three year loan from Columbia Pacific Economic Development District.

During the pool’s closure, Sholz said she also had to repair a pipe due to damage from a winter storm, which cost the pool $25,000 and 4000,000 gallons of water. A recent bid for re-grouting and re-caulking the pool shell estimated the additional repairs at $78,000. “We are completely unsure how we can get this project started until the COVID pandemic has come to a complete end,” she said.

Sholz enumerated these costs to the council in her letter, and asked the council to consider granting the pool leniency.

“With the expenses, limited operating hours/programs and resources, I would like to ask for your consideration in a temporary reduction in the percentage paid on our water bill or at least place a hold on our current percentage paid,” she said.

Eisenschmidt pool was built in 1939 during the Great Depression as part of the Work Projects Administration (WPA), a relief program aimed at getting unemployed people back to work by having them work on a wide variety of projects, and is one of eight functioning WPA pools left in the U.S.

Originally built as a life-saving measure for residents of St. Helens, after three drownings occurred in the Columbia River in the summer of 1936, Sholz said the pool continues its historic legacy today, and she hopes to guide it into the future.

“We are extremely proud to be part of its continuing future … We want nothing more than to keep this resource available at an affordable cost to our county residents," Sholz said.

The City Council was set to discuss the request from Sholz during it's Wednesday afternoon work session, May 5. Follow developments at thechronicleonline.com and in the Wednesday print editions of The Chronicle.

Anne Scholtz has been pretty busy over the past year.