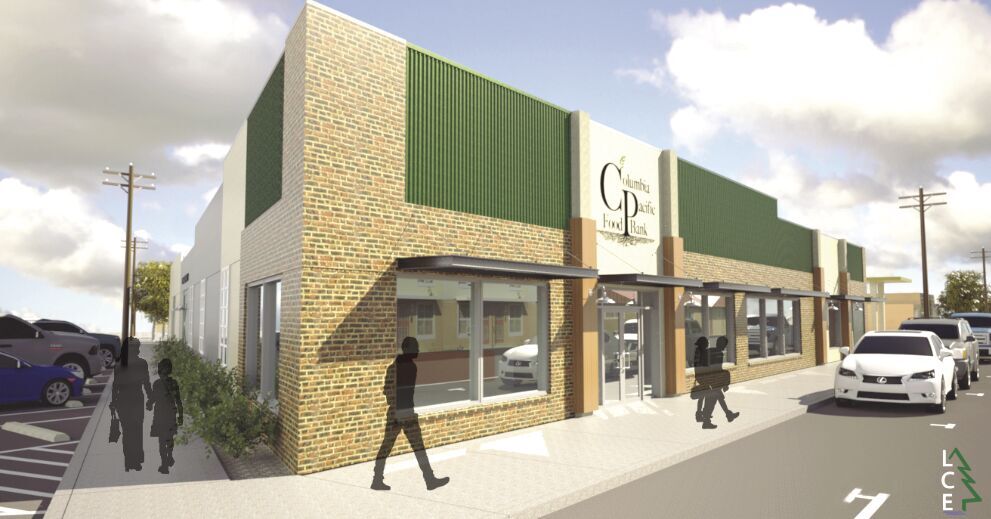 This is a conceptual drawing of the new Columbia Pacific Food Bank building.

Construction for the new Columbia Pacific Food Bank is underway at the site on Columbia Boulevard in St. Helens.

This is a conceptual drawing of the new food bank.

The CPFB is moving from its current location on Milton Way to a new home in the building formerly known as Columbia Electric Feed & Seed on Columbia Boulevard in downtown St. Helens.

“When you walk in, it’s very inviting. It feels somewhat like a normal market with higher ceilings and stocked shelves,” Jenks said. “It’s a bit less intimidating for those that might be coming in financially burdened, and the emotional stress that goes with that, which I think facilitates a much more enjoyable, humane experience.”

The new location will also generate more visibility for the food bank, according to Jenks.

“While it’s not a waterfront downtown area, it is a prime real estate location, with high exposure both to vehicular and pedestrian traffic,” she said.

Columbia Pacific Food Bank Executive Director Casey Wheeler told The Chronicle that the transition to a new facility will create ample space for employees to conduct these large-scale distributions.

“The layout of the space is going to be much more efficient,” he said. “So, it’ll be a lot easier to do things than with the configuration we have in our warehouse. You get more than three people max in there, and they’re falling over each other.”

Additional features of the facility include a conference room, bottle drop, and gender-neutral restrooms for patron and employee use.

Jenks said that the kitchen space, a place where families can practice their cooking skills and receive free, professional cooking lessons, is designed specifically for their comfort.

“The idea is that the kitchen emulates a residential home — recipes you can cook with microwaves, simple kitchen appliances that operate on standard outlets in the wall versus dedicated circuits,” she said. “It (also) has a natural electric stove, which is often what people in need might have more access to rather than gas stoves.”

Design elements aside, Jenks said that CPFB is taking things one step further than the Oregon Food Bank with its methodology.

“They want to have not just a really approachable experience, but an area that serves to provide fresh produce for the community that’s really easily accessible on a daily basis, without checking in on some of the things administratively that hinder that process,” she said. “Anyone, in theory, could just pull up and go on in and get some apples or greens for their salad.”

The need for a central food bank location in Columbia County is widespread, according to Wheeler.

“About one in 10 folks in the county access our services on a regular basis,” he said. “And that’s partly because of the situation in Columbia County. You have to commute for the most part to have a good-paying job.”

The food bank so far has been able to accommodate these numbers, in part due to its strong network of volunteers.

As the area’s central food bank agency, CPFB’s mission is to make food distribution more equitable for everyone in Columbia County, from Scappoose and St. Helens, to Clatskanie and Rainer.

“Our whole focus is to try and remove as many barriers or potential barriers as possible for those people that need access to food,” Wheeler said.

Construction at the new building has not been without its share of challenges.

“The building has gone through multiple lives within the community. It’s been around for a long time, so the structure itself is very unique and challenging for a remodel for a 2021 code-compliant facility,” JH Kelly Project Manager Luke Orem said. “I mean, there were probably 100 birds living inside this with broken glass and walls falling over when we first moved into the spot.”

Orem said he hopes that the construction will be completed before Christmas and that a worker shortage, caused in part by the COVID-19 pandemic, shifted the timeline.

“Agencies are struggling to keep people in their workforce. And because of that, we have longer lead times for materials. So, things that would typically take four weeks are taking six or beyond,” he said. “The industry as a whole has been hit with schedule delays. This project’s going to feel that pain too.”

The lag time on the distribution end has been challenging for JH Kelly to navigate, but for Orem and his employees, the work is incredibly worthwhile.

“I know that everybody that’s working on the projects, electricians, customers, they like working on projects like this,” he said. “They like talking, knowing that when we’re done and we drive past to see people getting food from community donations, we had a part in doing that. That’s a good morale booster.”

Wheeler said spreading the word about CPFB has been aided by the community-oriented atmosphere of Columbia County.

“It’s, for lack of a better term, boots on the ground and in a rural community atmosphere which is what we really have out here in Columbia County — is that one-on-one, small group interaction,” he said. “You’re talking with people, talking with groups, interacting, being an active participant. From that standpoint, that’s really how we’ve done it.”

Jenks has been tied into the project since before the building’s purchase and is enthusiastic about the outcome.

“I think it’s pretty exciting that they are taking this old building and converting it into something that serves the community but also is represented in a way that’s really accessible to the community,” she said.

Business Oregon allocated a $1.5 million Community Development Block Grant (CDBG) through the City of St. Helens for the development of the new CPFB building. Of the $1.5 million grant budget, $1.3 million is allocated to construction, with the full cost of renovation reaching $1.85 million.

“You know one of the things people ask us is ‘Which would you prefer? Money or food?’ And my answer is that we will take both. But, for every dollar you spend in the store with the resources and avenues I have, I can buy four to five times the amount you can with that dollar,” Wheeler said.