This is a conceptual drawing of the 80-unit apartment complex next to the Scappoose World Peace Candle.

This is the view from Highway 30 of the apartment complex adjacent to the World Peace Candle in Scapppose. 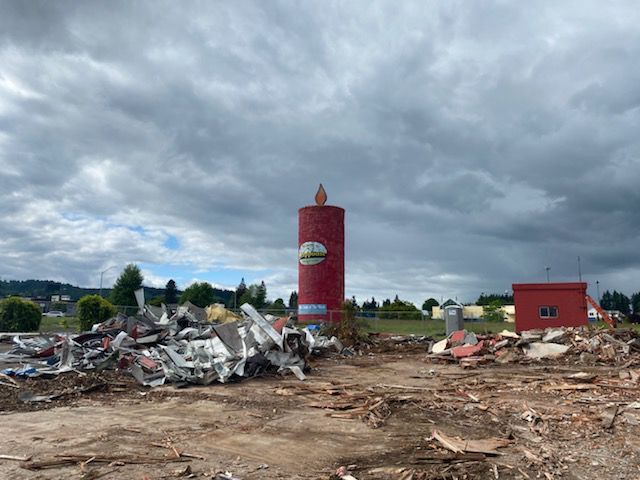 The iconic Scappoose Peace Candle remained in place following the demolition of nearby buildings on the property adjacent to Highway 30.

The Chronicle's update about the Scappoose Candle property apartment development is gaining dozens of Facebook comments.

Kathleen Anne Farley cities, “It’s going to take all the beauty that is Scappoose and ruin it.”

Tammy Maygra writes, “We don’t have the services to support more people and houses do not support or help the tax base.”

Jen White comments, “With so many people moving to Scappoose from Portland and the surrounding areas, one has to wonder why the plan is for the schools. They’re not big enough to support the growth that is to come.

Holly Zielsdorff sites, “I would prefer a Trader Joe’s instead.”

Jeremiah Dustin Harrington comments, “I remember when the candle was yellow. It better stay.”

Join the conversation and post your comments with this story at The Chronicle's Facebook page and follow developments here online and in the Wednesday print editions of The Chronicle.

Construction of an 80-unit apartment complex at the site of the Scappoose World Peace Candle is scheduled to begin this winter, according to the Portland development company, WDC Properties, which purchased the property in 2019.

The plans are to construct the 80-unit eco-friendly rental housing units in two buildings with parking for the residents and also for visitors to the Peace Candle.

When plans to build the apartment community on the grounds of the Peace Candle were first announced, many people voiced their concern for the fate of the local icon.

Thousands of people reached out to tell their stories and to explain just how much the Peace Candle meant to the residents of Scappoose, according to a release from Jessica Edsall, with EkoLiving, a sister company to WDC.

"WDC Properties decided to work with the city to create a plan to save the Peace Candle while taking down the adjacent barn and out buildings on the property," Edsall said. "CEO Mark Madden heard the public’s desire to save the historic structure and he wanted to ensure that it remained standing for a long time."

After announcing the new name for The Candlelight Apartments -in honor of the old candle factory that built the icon - Madden and his team began their efforts to preserve the beloved World Peace Candle, according to Edsall who said WDC, and Ekoliving proudly announce that they are officially gifting the Peace Candle and land surrounding the candle to the City of Scappoose through a long-term land easement.

“The candle is a local icon, and a beacon of hope, which is something we need today now more than ever, it is an honor to have the chance to be a part of continuing its legacy well into the future,” Madden said.

Edsall said the 80-unit rental project is geared for families and moderate-income residents, which will feature an exercise facility and a playground.

In an interview with The Chronicle last June in announcing the project, Edsall said the proposed Candlelight Apartments will help strengthen the local economy, celebrate the history of the community and provide a beautiful, environmentally responsible new apartment building for residents to call home.

Follow this developing story here on line and in the Wednesday print editions of The Chronicle.

The 50-foot tall, red Scappoose Peace Candle is a familiar sight for many Columbia County re…