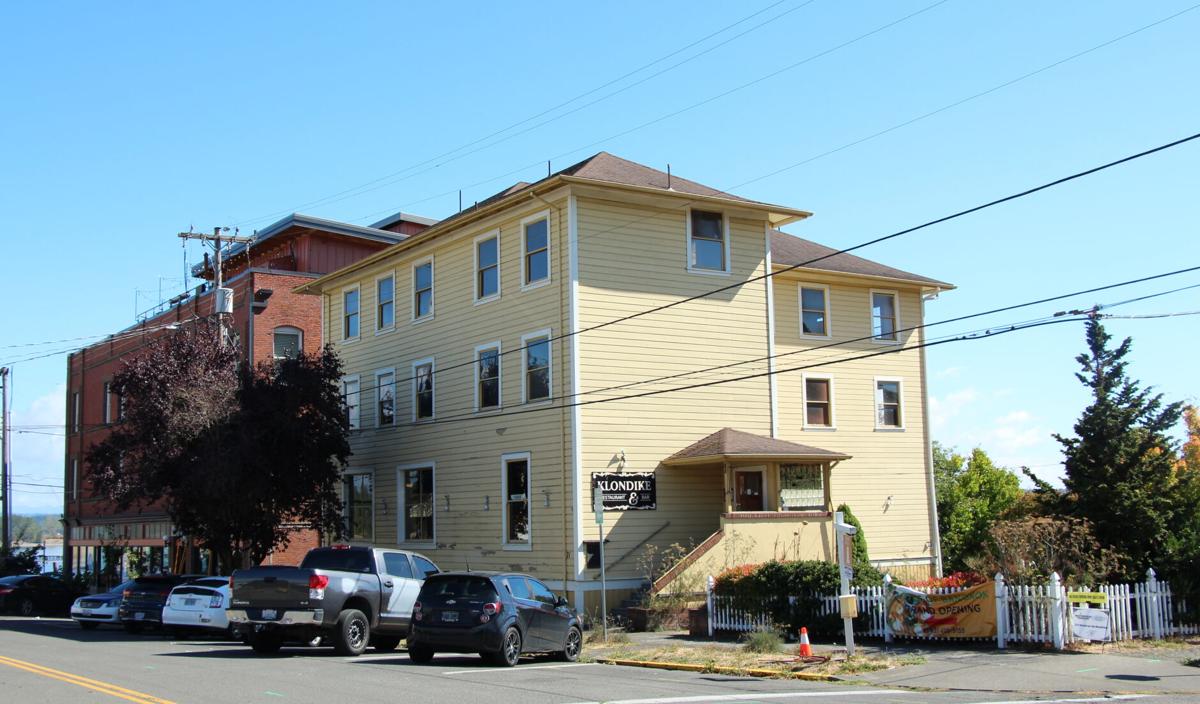 The 8,600 square foot Klondike Hotel and Restaurant is located at 1st and Cowlitz Streets in the Riverfront District of St. Helens. 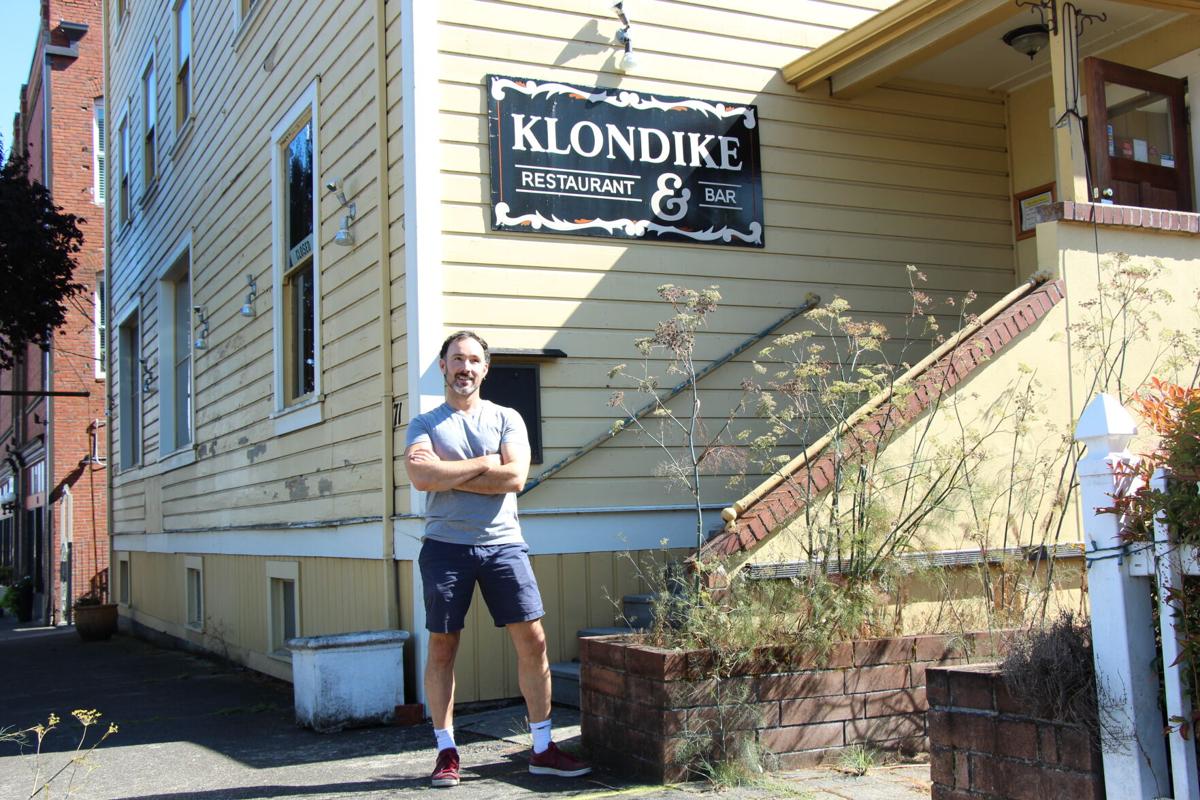 The new owner of the Klondike Building is Portland resident Holcombe Waller. 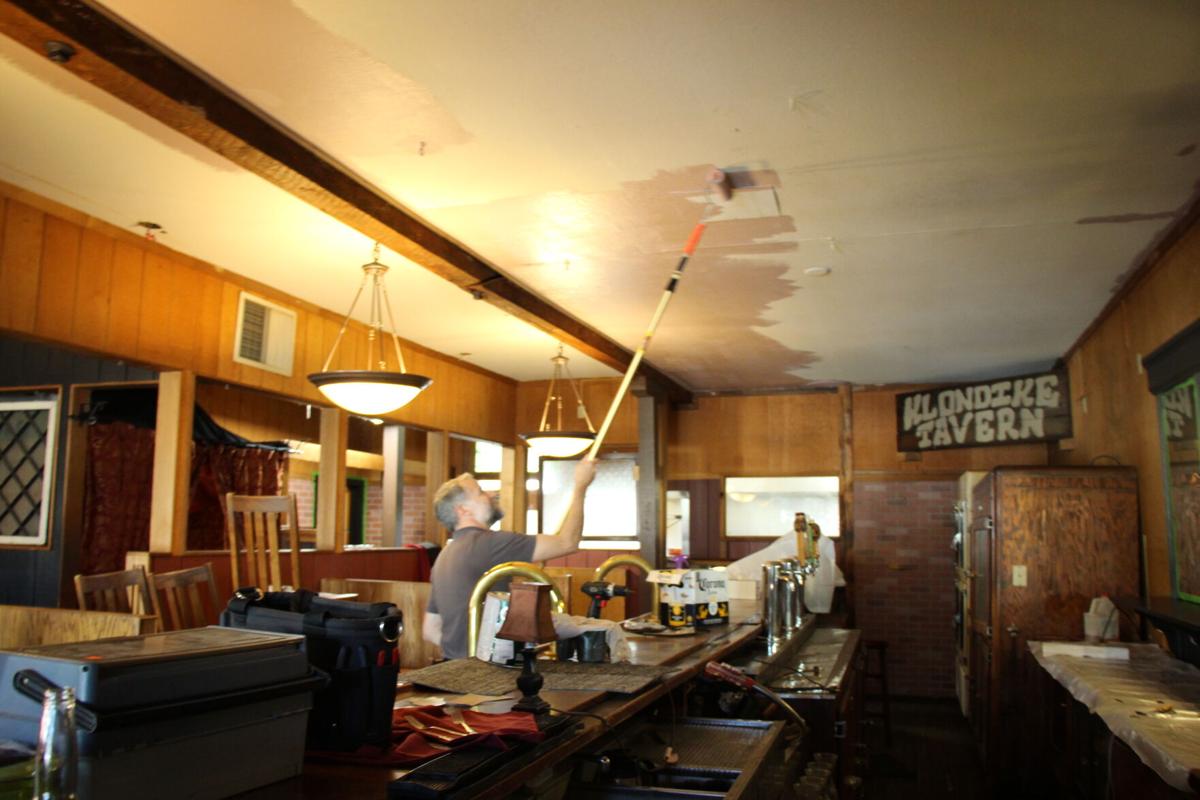 A worker paints the ceiling in the bar area as part of the new restoration of the Klondike. 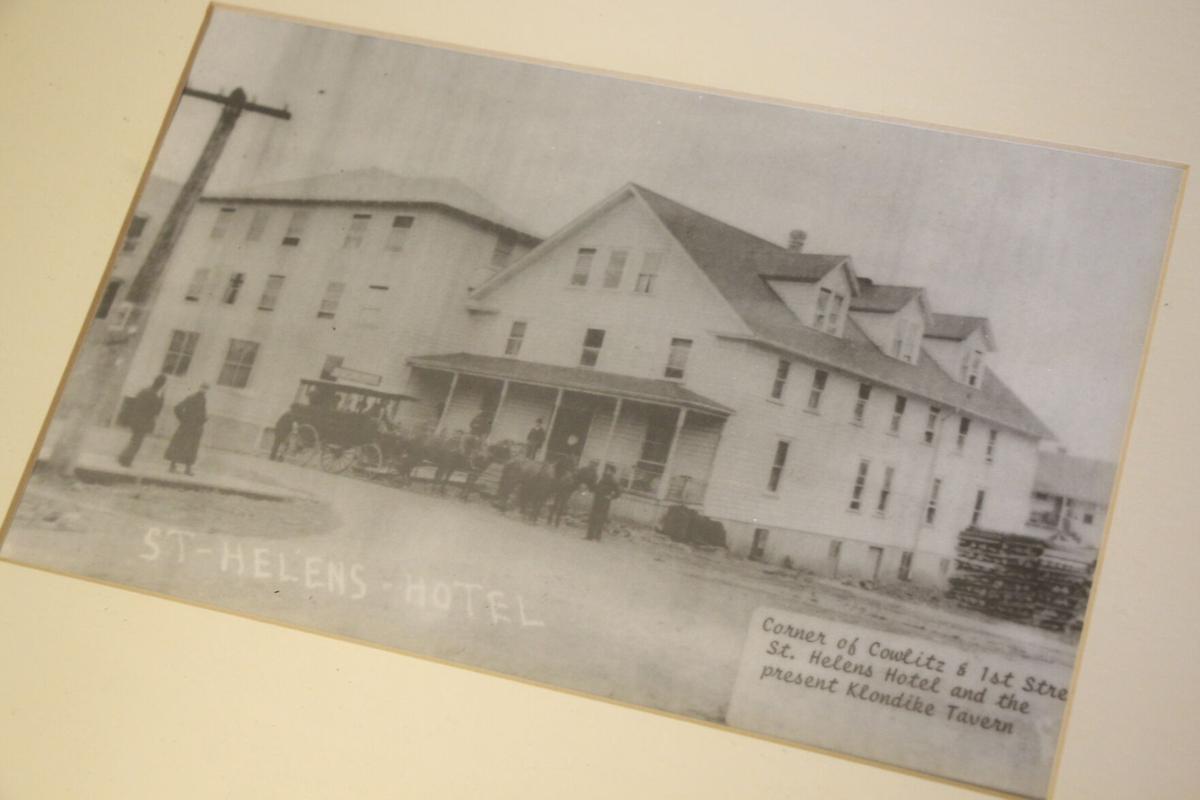 This framed photo is one found inside the Klondike showing what the building looked was like many years ago.

It is an iconic site along the Riverfront District in St. Helens but for the past few years the 8,600-square foot big yellow Klondike Hotel and restaurant has been sitting idle.

Former owners Dave Wuollet and Roni Bartlett closed the restaurant and bar in late summer of 2018, citing economic pressures and differences in negotiating the lease. The building was than listed on the market for $799,000 by Sadaka Realty LLC.

Following several months of research, Waller, acknowledged that purchasing and renovating the building would be complex, but with the support of friends, associates and investment partners, he decided to purchase the Klondike.

“I brought this building for $650,000 to try to restore the hotel and the restaurant but that is going to take some doing,” Waller said.

The hotel has been unoccupied for several years and Waller acknowledges that the building has to be brought up to codes. Waller estimated that his restoration of the Klondike could cost “well over a million dollars.”

“But I have done similar restorations before and to me I think it is worth doing,” he said.

Waller hopes to open the restaurant with limited weekend operations Oct. 1. He said as the building reopens, it will be an experiment to see what fits best.

“The focus is on right now will be a kind of Halloweentown weekend through the month of October,” he said. “Just sprucing up the spaces, partnering with EAT George’s food truck for food and doing some kind of highly-themed and fun preforming things on the patio and inside on the first floor. We’ll be serving beer, wine, cocktails and we will have live piano music. Then we will explore the idea of opening for the weekends in November or early December.”

While the specific menu is still in the works, Waller said his vision for the restaurant is dinner concerts.

“Because I come from a music and performance background, so doing small promoted dinner concerts using local and regional artists with a very focused dinner menu around ticketed attendees,”

he said. Restaurants are really hard, so we are focusing on events for the time being to see what works.”

Waller said he is working to get the Klondike’s kitchen relicensed with the health department and planning re-plumbing that’s needed. He also wants to add a coffee cart to the building’s front patio area within the next few months. He said the Klondike’s patio that faces both 1st and Cowlitz Streets will be opened up to become an important element of the restoration.

“I want the patio to connect to the restaurant with a porch so that when customers walk into the restaurant they can walk to the patio,” he said. “With a coffee cart on the corner on the patio facing the street so that all the folks that come walking here can have a place to stop in the morning for coffee and later for lunch. I want to work the coffee cart and get to know everybody.”

Overall, Waller hopes to have the restaurant and an 18-room hotel fully operational in two years. He said he would like to restructure the entrances into the restaurant and to the hotel and have a functional lobby. Waller said he will be closely following local, state and federal permitting standards and requirements in his restoration efforts.

“This is a super iconic area,” Waller said of the St. Helens RIverfront. “Especially with the plans for redevelopment. This building should set a certain standard in the expectation of people in the community. This town was made by individuals, like small businesses, small property owners. The fabric reflects that and gives it its personality and local flavor. I want to bring that right here at this structure and hopefully extended that in the riverfront development direction.

Waller said he wants to be a part of the city’s successful redevelopment.

“There is so much enthusiasm by the local businesses and property owners here,” he said. “It is individuals working together, so I am trying to participate in that whole experience, beautifying the downtown as a local.”

Originally from California, Waller is a preforming singer and songwriter. He moved to Portland 17 years ago. He also has background in renovating buildings.

“I really enjoy hosting and I find that performing is kind of like hosting,” he said.

The Klondike originally served as a 1910 boarding house for local workers in the nearby logging mill and boat docks where McCormick Steam Company constructed steam ships, according to Sadaka Realty LLC. The three-story hotel had a colorful history.

“It seems that behind the hotel were bath houses where ‘working girls’ entertained customers,” Sadaka Realty LLC states in the web page entry listing the hotel for sale or lease.

The hotel was closed in 1961. A fine dining restaurant and saloon later opened on the first floor of the Klondike but eventually was closed.

Didn’t care much for the restaurant, although the potential of charm always existed. Excited about a hotel or Inn 🏨 downtown.