Porter issued the letter Oct. 29, notifying parents of a recent string of protests held at the intersection of High School Way and Highway 30, adjacent to the high school, concerning pandemic mandates.

“Unfortunately, during recent protests, multiple students have reported experiencing events in which their sense of security was threatened,” Porter’s letter reads. “These incidents include adults verbally assaulting children on their walk to school and blocking their sidewalk and crosswalk access.”

“As an attendee of these events I am disheartened by the false accusations of verbal assaults and the accosting students at our peaceful rallies,” she said. “These are completely untrue. I request that this be remedied as quickly as possible, rather than sending out accusatory letters or speaking to the media to put pressure on us to sit down or back off.”

Walter emphasized the group’s desire to be heard and to ultimately have a productive discussion.

“Our group requests an open dialogue in person with district leaders,” she said.

Walter’s statements to the school board outlined a public complaint lodged by parents and community members who have participated in a series of rallies near the high school, claiming that Porter’s letter “disparaged a great number of parents and community members alleging; adults verbally assaulting children, and blocking the sidewalk and crosswalk access of students.”

The complaint also included steps for remediation by the school board.

“Tim Porter owes the community of Scappoose a written apology for his reprehensible comments and false allegations he made against parents and community members at the rally. He should not be making heinous accusations based on hearsay and/or lies,” the letter states.

The complaint also states that if the superintendent refuses to rescind his comments and apologize, the group is requesting an investigation by the school board. 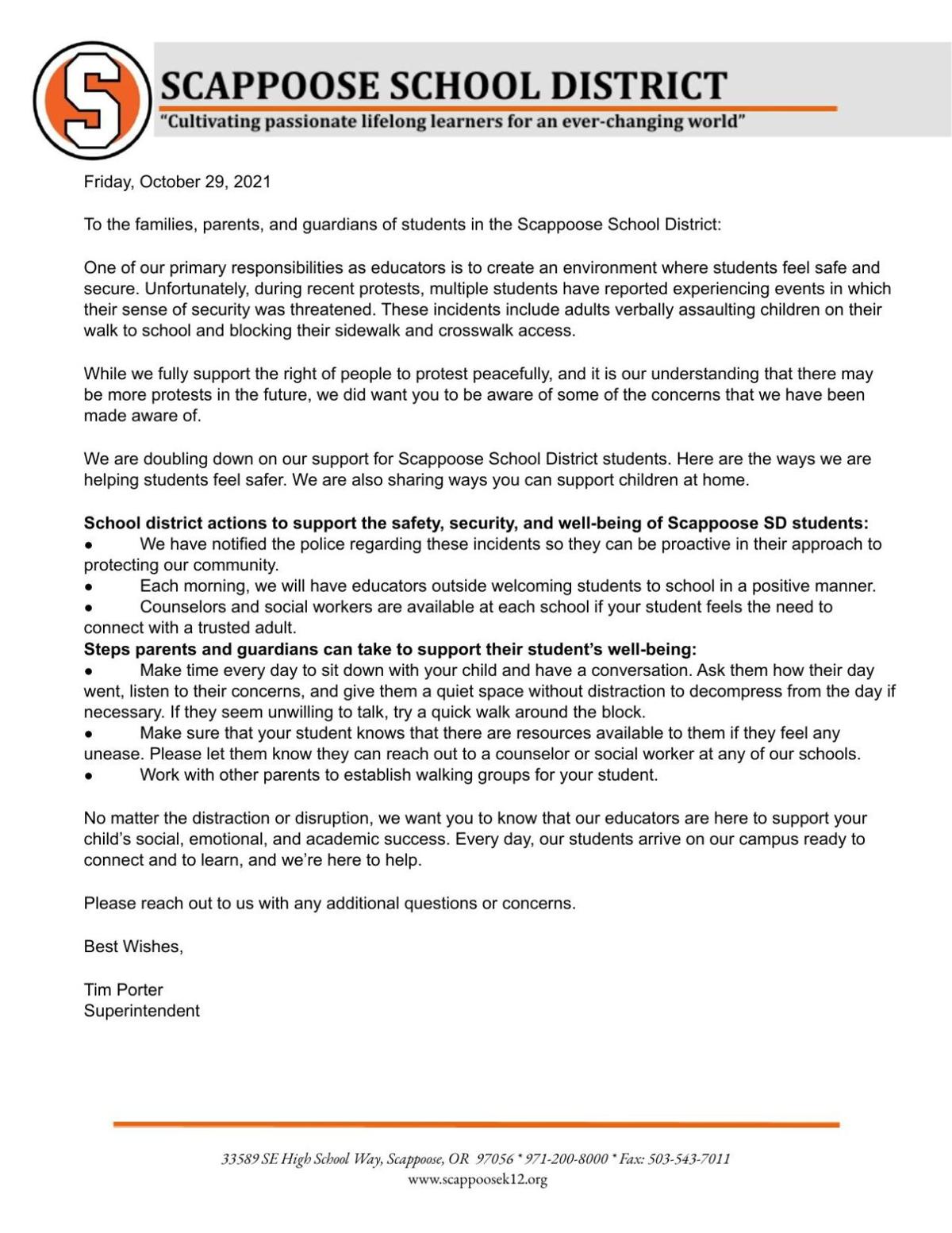 Amanda Normine, a Scappoose resident with children in the school district, also addressed the school board at the Nov. 8 meeting. She expressed her concerns about the district’s school bus routes, and how mandatory seating charts have made the logistics of getting to school exceedingly difficult for rural families.

“I recognize that this is an unprecedented year and that many areas are suffering due to staff shortages, state mandates, and all of the COVID regulations that have hit the schools,” Normine said. “However, I’m concerned that there are some scenarios that are being created by transportation shortages and the mandates around transportation which are preventing some students in the district (from) equal access to education.”

Normine refered to a November “blackout” schedule posted on the Scappoose School District website, which staggers a majority of bus routes to operate two weeks out of every month.

“My sister has children in the district who ride the bus 6,” Normine said. “Bus 6 is one of the routes which has been hit especially hard, having every other week on blackout. They only have transportation 50% of the time (on the) route that serves Scappoose, Vernonia, and many of the rural homes out there.”

Normine told the board her sister and brother-in-law have work schedules that prevent them from being able to drop off their kids at school in the morning.

“They went to the school and asked, is there a solution? The school said yes, they can do online learning Canvas on the weeks that there’s no bus,” she said. “Unfortunately due to their rural area, their internet is not good enough to support anything, let alone online learning or videos.”

According to Normine, the school did not provide a viable substitute to replace the missed learning, which lead her and her sister to come up with a workaround.

The workaround, Normine said, was to take her sister’s children in for two weeks out of the month, so they could ride the bus on a consistent schedule. Normine said she was told that her actions violated school bus seating chart policies.

“We recently found out that her children are not allowed to ride the bus with my children. They must select one bus route and one bus route only. So I call the school, thinking that this has got to be a mistake,” she said. “They said that a solution is that they would change my sister’s children’s bus to my house every week, which as you know, is not a solution because as much as I love my sister’s children, I do not want full custody.”

Normine asked the school board to consider the effect the district’s regulations have on students in rural neighborhoods.

“In the end, I understand that we need rules that apply equally to all,” she said. “However, there are laws around equal access to education that was created, because not all students have the same barriers to education. In this case, there is no other option, so my question to you is, how hard is it to amend a seating chart?”

Following the public comment period during the Nov. 8 meeting, the Scappoose School Board staff said they are working on developing a resolution to the citizen complaints. The staff said the resolution will be available in the coming weeks.

The Chronicle will continue to follow this developing story with updates at thechronicleonline.com and in the Wednesday print editions of The Chronicle.