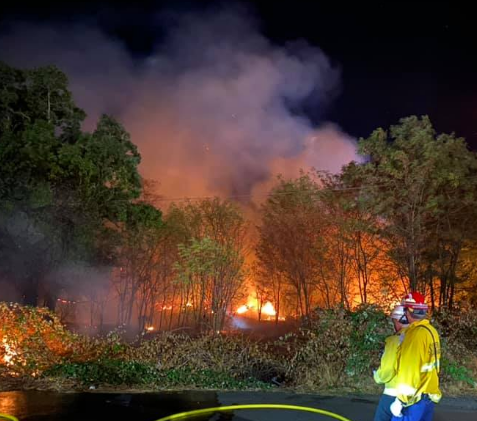 Tall flames can be seen at the site of the brush fire. 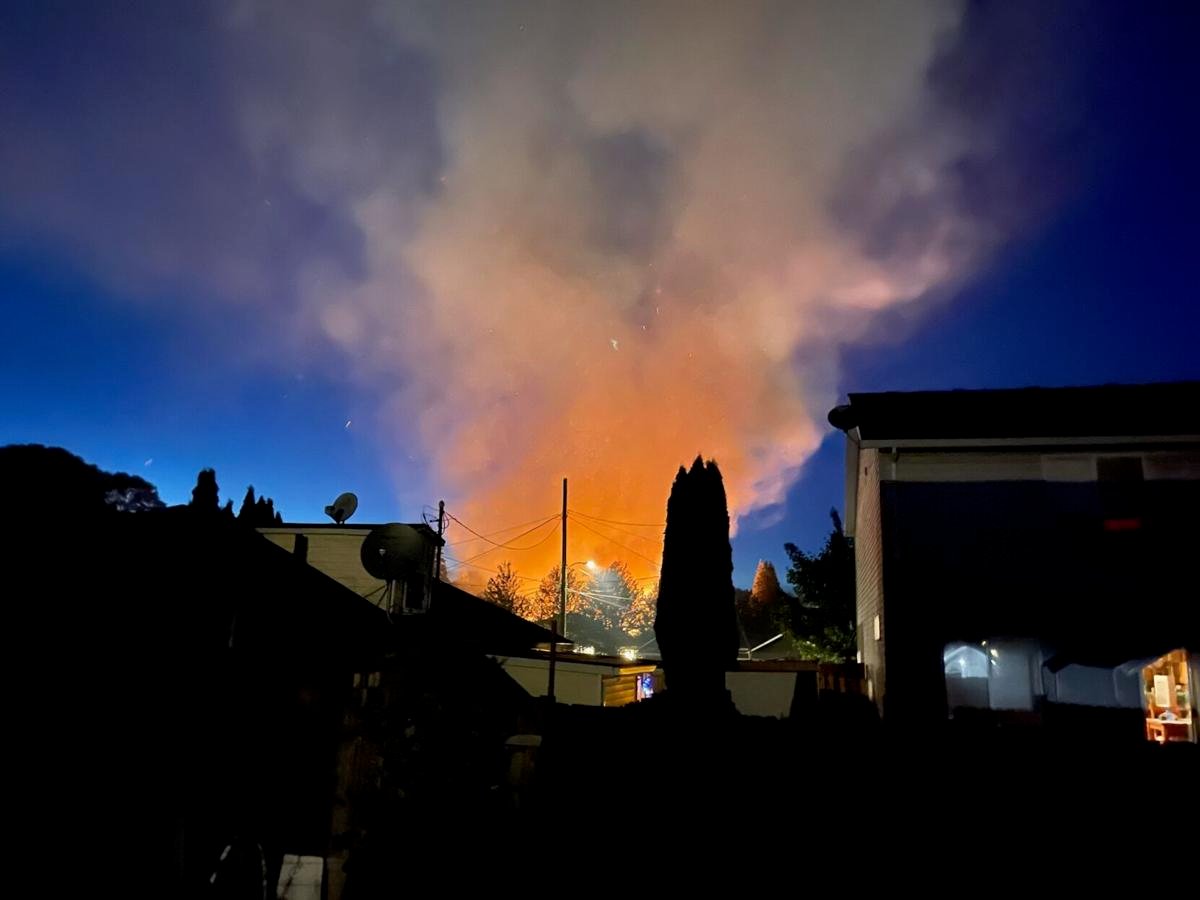 The flames could be seen from blocks away. 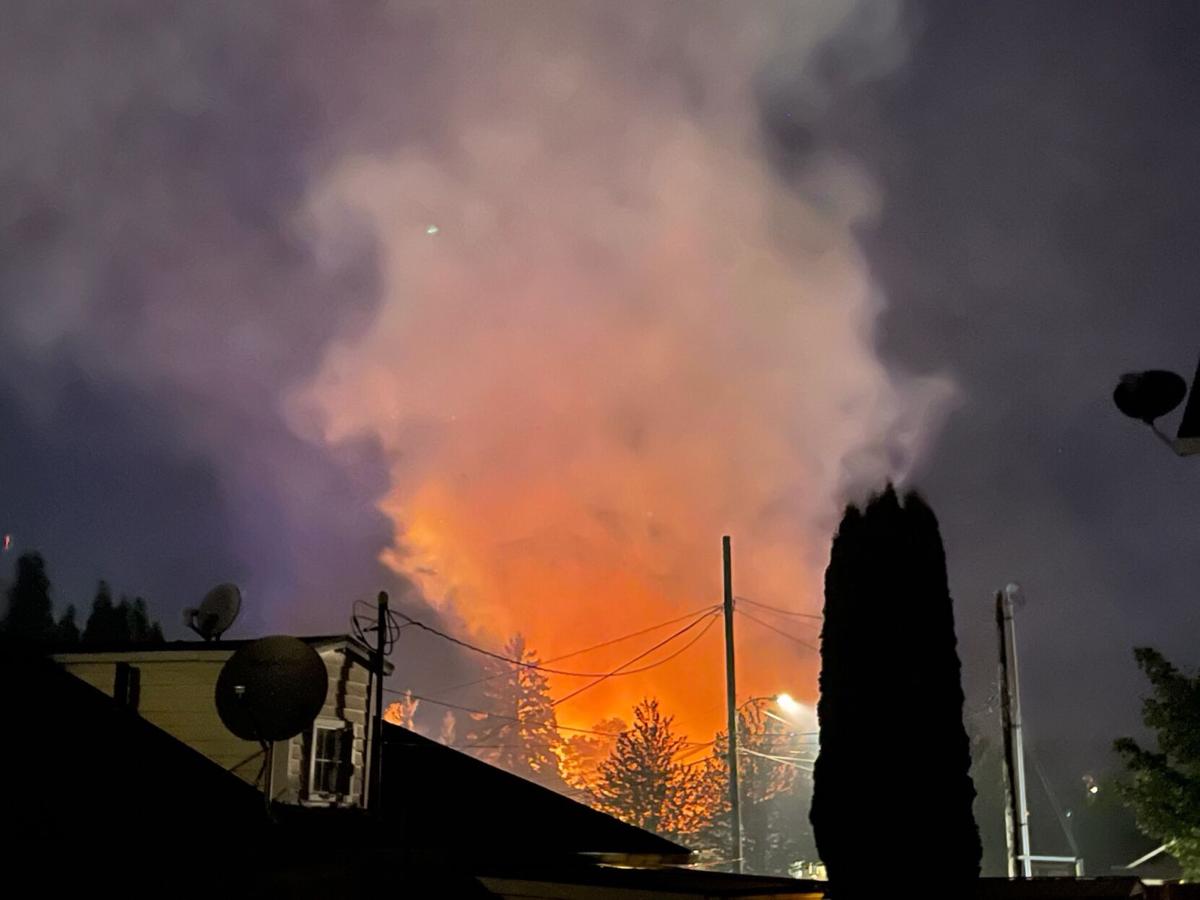 The brush fire sent flames high into the air. 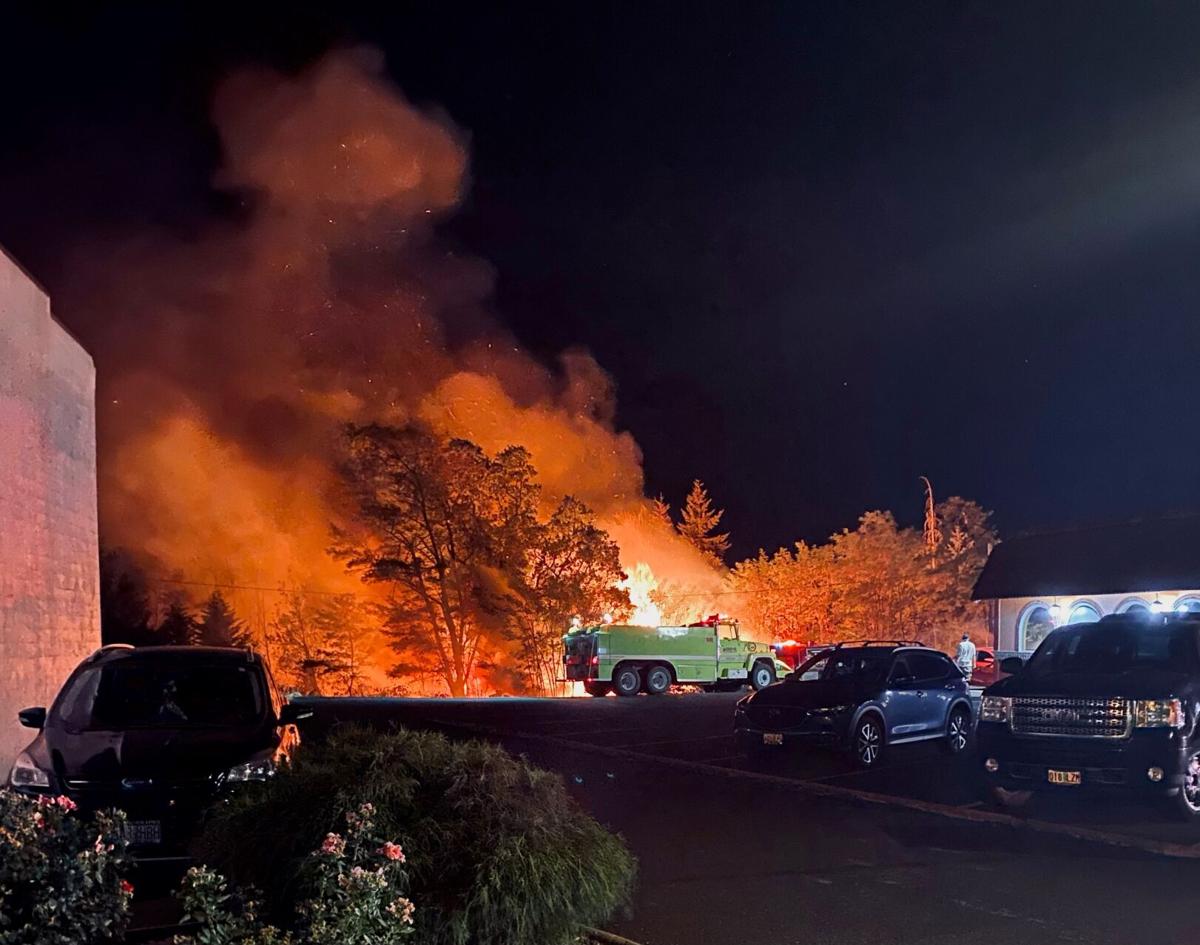 The brush fire came close to local businesses and threatened new by homes, according to CRFR. 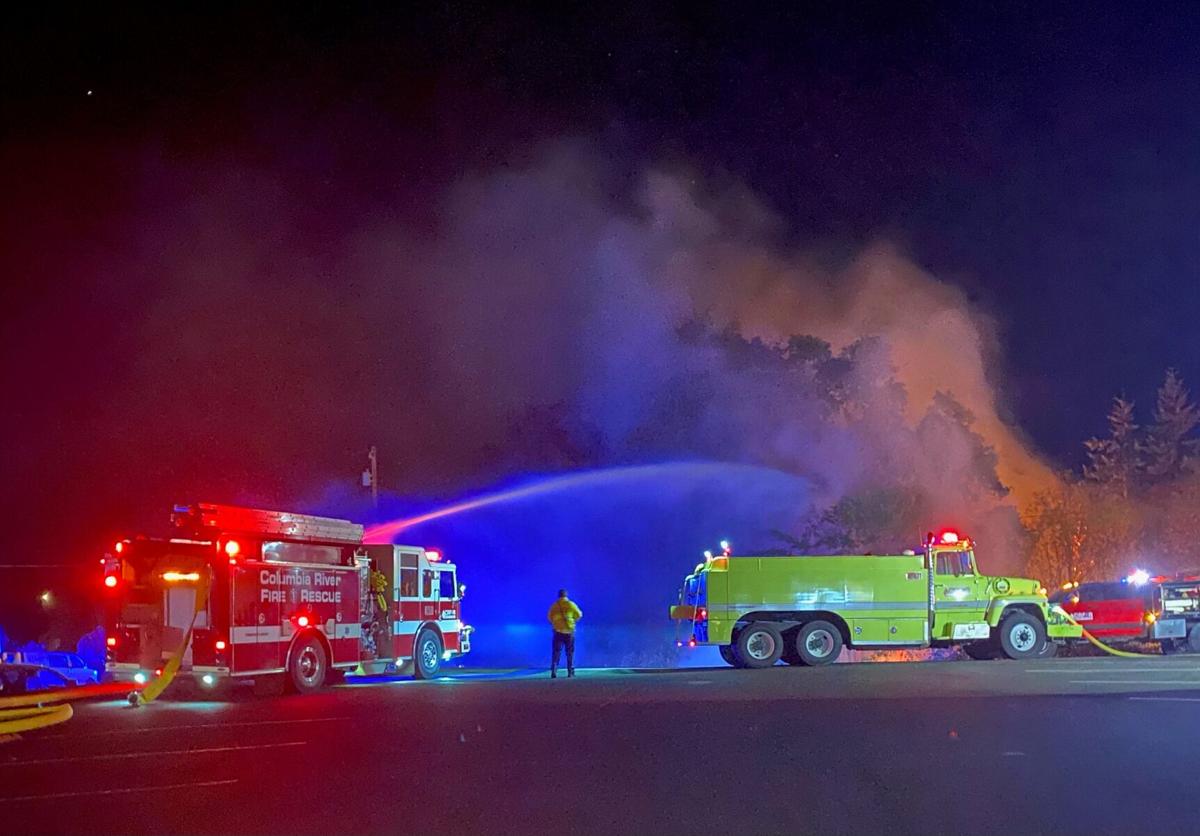 Multiple resources arrived on the scene of the brush fire. 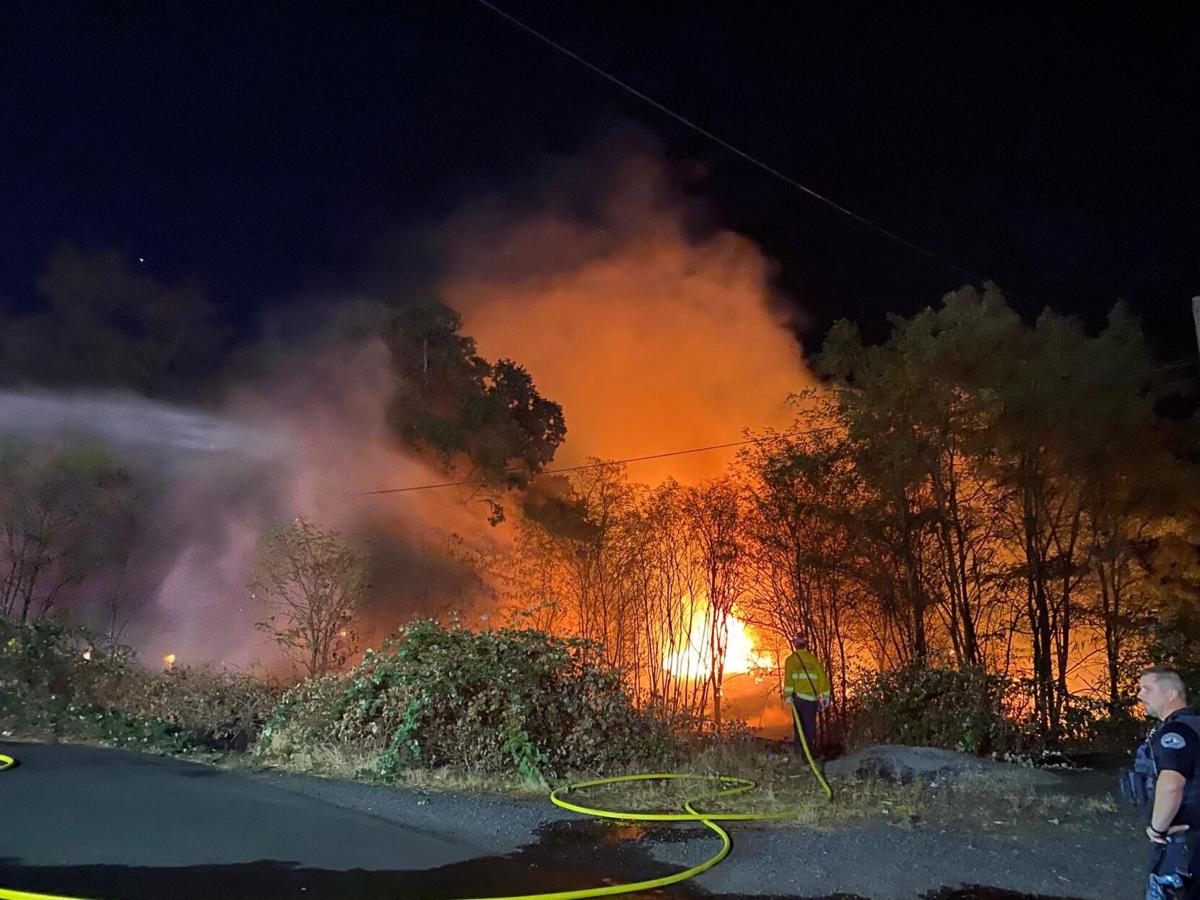 CRFR crews work to put out the brush fire.

On Wednesday, September 8, 2021 at 8:33 p.m. crews were dispatched to Columbia Boulevard in St. Helens behind El Tapatio Restaurant.

The call was reported as a brush fire that was threatening nearby businesses and several residences. In high danger weather conditions, every fire start has the potential to become an extremely large fire. In this case, we experienced a fire in the middle of town next to businesses and residences. The potential for this to get large and out of control was high. Firefighters managed to control the fire within an hour at approximately 1 acre in size.

The cause of the fire was determined by our Fire Marshal to be a human started campfire. Fortunately, no serious injuries occurred, medics evaluated one patient with smoke inhalation on scene who didn’t require hospital transport. While there is minor damage to some personal property along with the forested area, we were lucky the fire didn’t spread further. The residents did a great job of evacuating and doing their due diligence at their respective property to help support the fire from further damage.

Crews remained on scene throughout the night mopping up and monitoring any additional fire spread. We also were assisted by Columbia River PUD, Oregon Department of Forestry, St. Helens Police Department and Scappoose Fire District, their support and assistance in mitigating the fire was crucial.

Columbia River Fire & Rescue would like to stress that Columbia County is still in a high fire danger due to hot, dry and windy conditions and last night was no exception. The safety of our residents is our first priority.

Please remember, burning is still not allowed, nearly 85% of wildfires are human caused, it is critical that the citizens use extreme care and caution with campfires, BBQ’s cigarettes and any other equipment that can cause a fire. For more information on fire safety contact Columbia River Fire & Rescue.

At 8:33 p.m. on Wednesday, Sept. 8 Columbia River Fire & Rescue (CRFR) crews responded to a brush fire that was close to an acre in size directly behind El Tapatio on Columbia Boulevard in St. Helens.

"The fire was blazing with flames going up into the cable/power lines and took approximately an hour for firefighters to get the fire under control," CRFR's Jennifer Motherway said. "The fire threatened close to 10 homes as well as an RV, numerous families in the surrounding homes were evacuated during the incident."

Firefighters remained at the scene throughout the night to mop up and continue to manage hot spots and ensure the safety of the community.

"There was one minor injury related to smoke that medics were able to care for on scene," Motherway said. "The investigation into the cause of the fire is being handled by our fire marshal, no details are available at this time, as we will continue to investigate during daylight hours."

CRFR Chief Joel Medina credits the mutual response for the effective and quick suppression efforts of the brush fire.

"I would like to extend my sincere gratitude to St. Helens Police, Oregon Department of Forestry and Scappoose Fire in mitigating this situation," Medina said. "This is just a glimmering example of the collaborative effort that is put together among the districts and supporting agencies in our county to ensure the safety and well being of our citizens."

The fire was threatening structures on Columbia Boulevard behind the El Tapatio Restaurant, according to CRFR officials.

Fire officials alerted the public of the fire with a Facebook post asking that people avoid the area due to safety concerns and that multiple resources were at the scene of the blaze.

At 10:08 p.m. CRFR reported that the fire was shy of one acre and crews had the blaze under control. Fire crews remained on scene throughout the night for mop up and tactical patrol.

Details about the cause of the fire are pending.

Update / Wildfire: Crews rush to 30-plus acre blaze near Scappoose