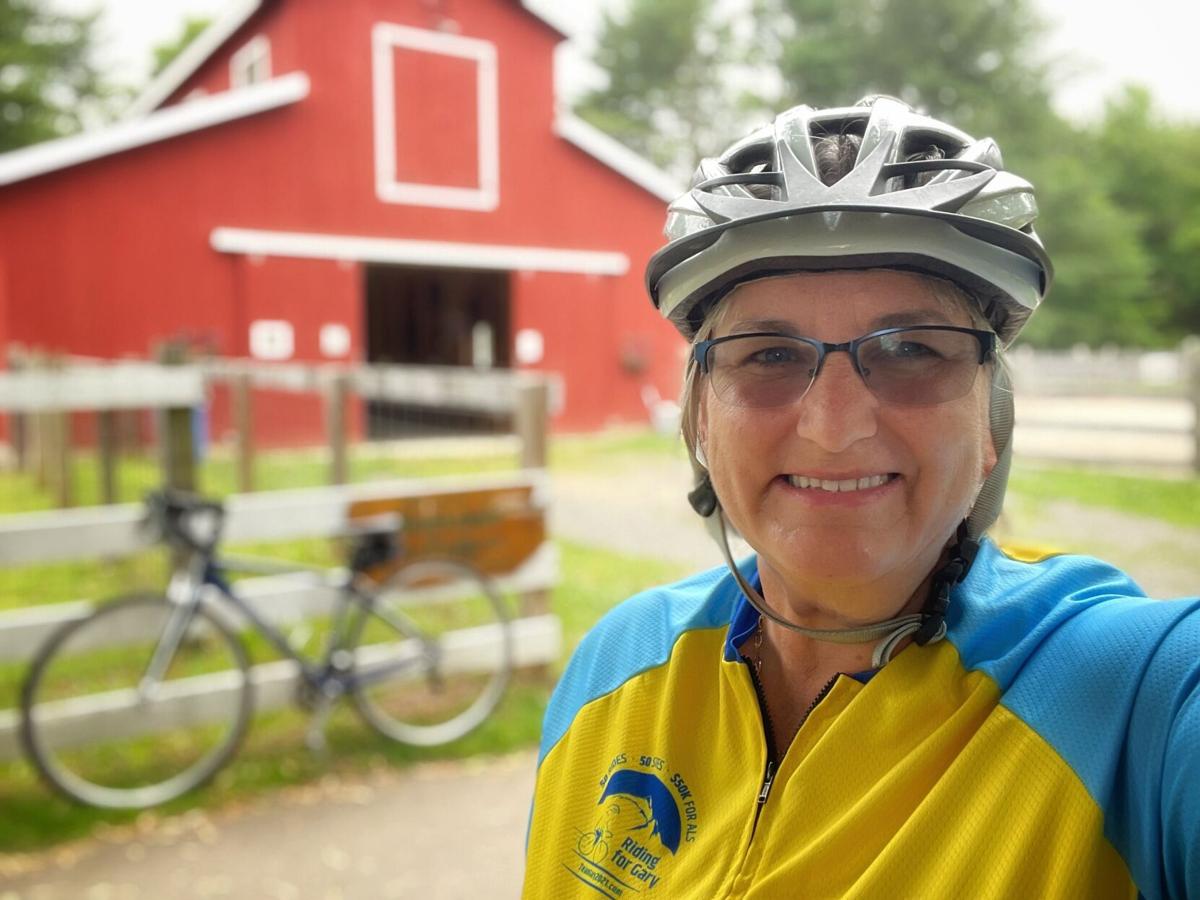 Tami Garner shares a photo from her 50 state journey. 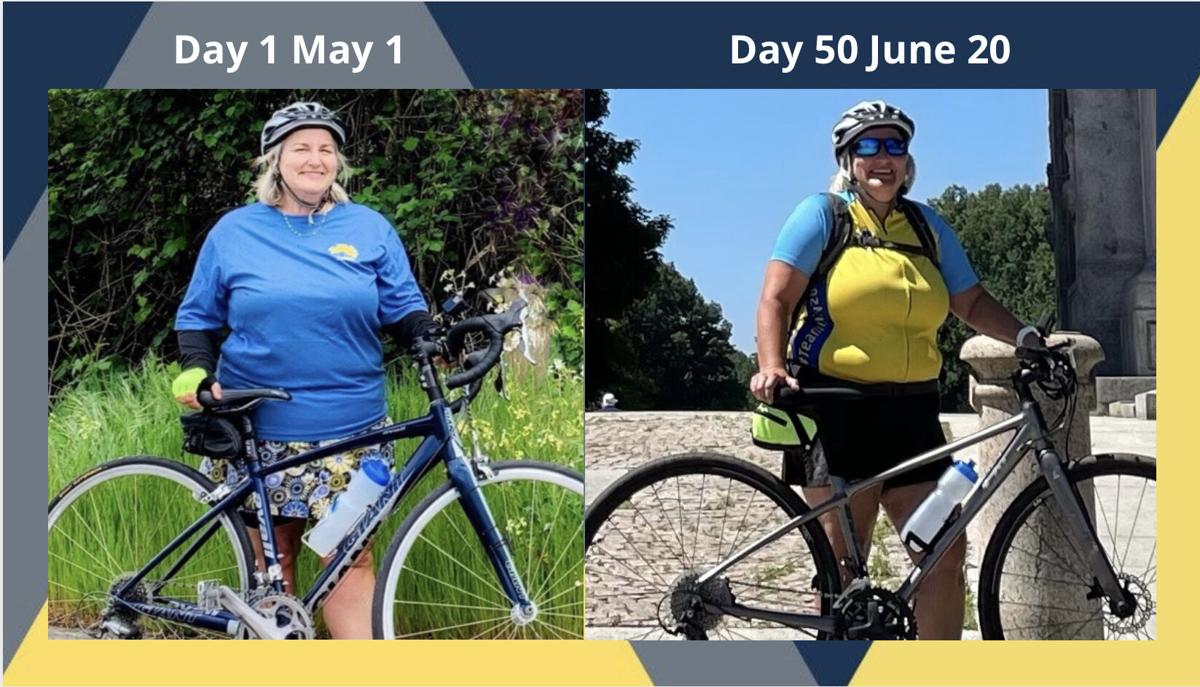 Tammi Garner at the start of her national bike journey and on day 50 of the ride.

Tami Garner has returned to Columbia County to take a brief break from her bike riding quest.

She came home to attend the June 26 memorial services for her husband, Gary, who passed away in March from ALS.

Following his death, Tami decided to launch a mission to ride her bike in 50 states, 50 rides, raising $50,000 for the NW Chapter of ALS as a tribute to her husband. In late April, The Chronicle profiled Tami’s preparations for the journey.

“Our team took some time to lay the groundwork since it was such a significant mission and process,” she said in an updated interview conducted this past week. “It was a fast turnaround, no doubt, but May is ALS Awareness month, and we felt that it was a symbolic and solid time to begin.”

According to the Mayo Clinic, Amyotrophic lateral sclerosis, or ALS, is a progressive nervous system disease that affects nerve cells in the brain and spinal cord, causing loss of muscle control.

ALS often begins with muscle twitching and weakness in a limb, or slurred speech. Eventually, ALS affects control of the muscles needed to move, speak, eat and breathe. There is no cure for this fatal disease.

Tami said she is on schedule and has just completed her 30th ride in Providence, Rhode Island.

Shortly after arriving in Rhode Island June 23, Tami flew back to Oregon returning to Scappoose to attend her husband’s memorial service. Tami said she will resume her bike ride following other family commitments.

“I have two adult children getting married this summer,” she said. “The first one is on July 10. I fly back to Boston on the 11th and will resume my ride on the 13th. Our schedule is on the website, with only a couple small changes. I’ll ride as per the schedule, barring any unforeseen obstacles, until about the 1st of  September, when my final ride will be in Anchorage, AK.”

According to Garner, the ride has presented emotional, physical and financial challenges, adding that the  mission can be physically and emotionally draining.

“I’m alone 95% of the time, and while I don’t mind the solitude, it can take its toll,” she said. “Riding so many trails, hauling the bikes, being constantly on the move can be challenging. At one point I ended up in urgent-care for a minor medical issue, but  still managed to complete my ride that day.”

Garner said when her team determined this  mission, she knew she had to keep moving no matter what.

“I purchased an additional bicycle when I was in Texas because the one had was not suitable for riding in the rain or on rough terrain,” she said. “The team and I are pleased that we’ve stayed on  schedule in spite of inclement weather and bike repairs.”

Along the way across the nation, Garner said she has made amazing contacts, some of which have been official, such as the several states in which ALS Chapter  representatives have come out to meet and greet her before her ride.

“We’ve been able to exchange  ideas and experiences, and learn what each state is doing for their  respective communities,” she said. “I was invited to speak at a walkathon for an ALS family near Mobile, Alabama, and it opened my eyes not only to the different ways ALS Chapters reach families, but also how critical it is for families to accept help when it is offered.”

Other meetings, Garner said,  have been casual but impactful.

“It’s remarkable how many people you meet who have had a family member, colleague, or  acquaintance die from the disease,” she said.

Garner said her  approach on each ride in each state has been pretty simple.

“I drive to each state, ride 10-20 miles on local bike trails, and stay either with local host families, campgrounds, or hotels.” she said. “I talk with local ALS representatives, meet with  community  members, and report my rides on social media.”

According to Garner, the most impactful experience she has seen so far is the lasting impact that ALS has on friends and families whose loved ones are living with, or have died from the diseases.

“Even though ALS is an extremely rare disease, with fewer than .02% of the population living with ALS at any one time, almost everyone I have spoken to has known someone who has suffered with this horrible disease,” she said.

“ALS is financially devastating for families living with this disease,” she said. “In addition to funding research, the ALS Association, Oregon and SW Washington chapter support local families with equipment loans, provide support groups, attend medical appointments with persons living with ALS, and much more. We wanted to raise enough money to significantly support their programs.”

Garner sites ‘In his Man in the Arena’ speech, in which Theodore Roosevelt said, “..the credit belongs to the man who…spends himself in a worthy cause; who at the best knows in the end the triumph of high achievement, and who at the worst, if he fails, at least fails while daring greatly”

“I believe with all my heart that this is a worthy cause, and that regardless of the outcome, we are already succeeding,” she said.

From the beginning, Garner said her mission was twofold.

“First, as a new widow, after two years of caring for my husband, I needed to heal,” she said. “This ride was a bucket list item for Gary, so I figured I would ride for him, and the challenge would help my own grief process.

Garner added that she and her husband appreciated the outreach, the mentoring and guidance that the ALS Association, specifically the Oregon/SW Washington Chapter, had given to them during the worst trauma of of their lives and the last few months of her husband’s life.

“I’ve always believed that giving back was a great way to heal, and this is my way of showing my gratitude to a great organization,” she said.  “We all have something to give. We can all work together to make a better, kinder world. I’m just doing what was on my heart and mind where I knew I could make an impact. We don’t have to be young, athletic or affluent to make a change or share support in this world. Sharing information and support is the first step to bringing us all closer together. “

To support Tami Garner’s ride and the ALS, visit teamGary2021.com.

A quest to bike ride in 50 states is just about compete for a Scappoose woman.

The Chronicle first reported earlier this year that Scappoose resident Tami Garner would embark on a fifty state journey to raise $50,000 for …