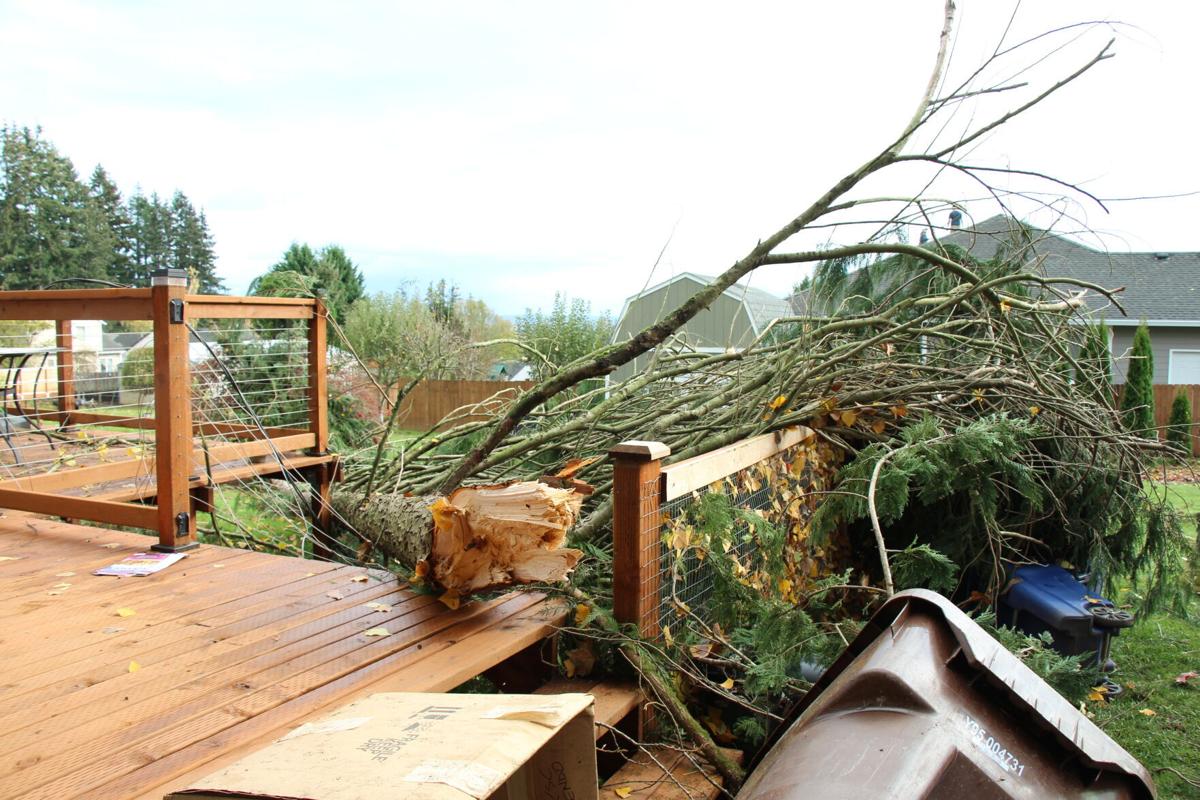 The tornado sent trees down damaging this deck at the home of Laurie and Gary Hallaian's house off of Pittsburgh Road. 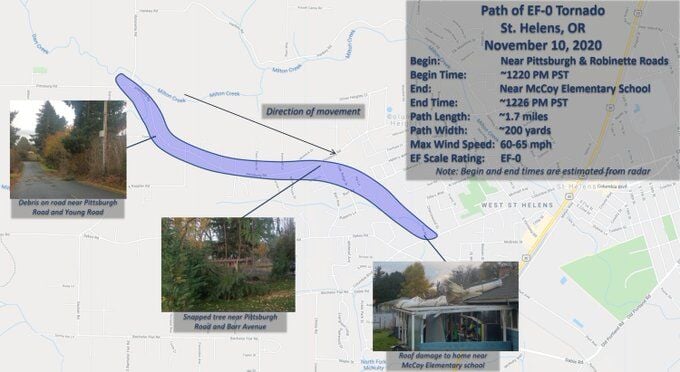 There are new details emerging following the small tornado that touch down in St. Helens on Tuesday, Nov. 10.

The National Weather Service (NWS) has conducted a storm survey of the tornado that touched down in northwest St. Helens along Pittsburg Road at approximately 12:20 p.m. on Tuesday. The tornado was rated as an EF-0, with a path length of 1.7 miles. The EF-0 rating is for the less sever tornadoes.

National Weather Service meteorology technician Gerald Macke said the tornado had wind speeds of 60 to 65 miles per hour in the funnel cloud.

"It was on the ground for an estimated six minutes and we are estimating 15 to 20 miles an hour is how fast the tornado was moving across the earth," Macke said.

While there have been no reports of injury, the tornado did cause damage to local homes.

Two trees fell on Laurie and Gary Hallaian's property off of Pittsburgh Road. One fell in the front, and the other toward the back side of the house. Both narrowly missed the house itself, but one destroyed part of the back deck.

"Both windows are plastered in debris," Laurie Hallaian said.

A patch of fence dividing the Hallaians' property with their neighbors was blown down as well, marking the storm's trail.

While Macke said the NWS is not forecasting any other severe weather for the area, a series of storms are expected to move through the region by Thursday.

"The storms will produce gusty winds for the area into the weekend," he said. "Winds could gust to about 20 to 30 miles an hour with the strongest winds overnight Friday. We are forecasting three quarters of inch of rain on Thursday and another quarter of inch Friday night."

How tornadoes are rated

NOAA’s National Weather Service fully implemented the Enhanced Fujita (EF) in early 2007, to rate tornadoes, replacing the original Fujita Scale. The EF scale rates tornadoes on a scale from zero to five, but ranges in wind speed will be more accurate with the improved rating scale, according to a post at NOAA's website.

The Fujita scale was developed in 1971 by T. Theodore Fujita, Ph.D., to rate tornadoes and estimate associated wind speed based on the damage they cause. The EF scale refines and improves the original scale. It was developed by the Texas Tech University Wind Science and Engineering Research Center , along with a forum of wind engineers, universities, private companies, government organizations, private sector meteorologists, and NOAA meteorologists from across the country.

How are you doing your Holiday shopping this year?