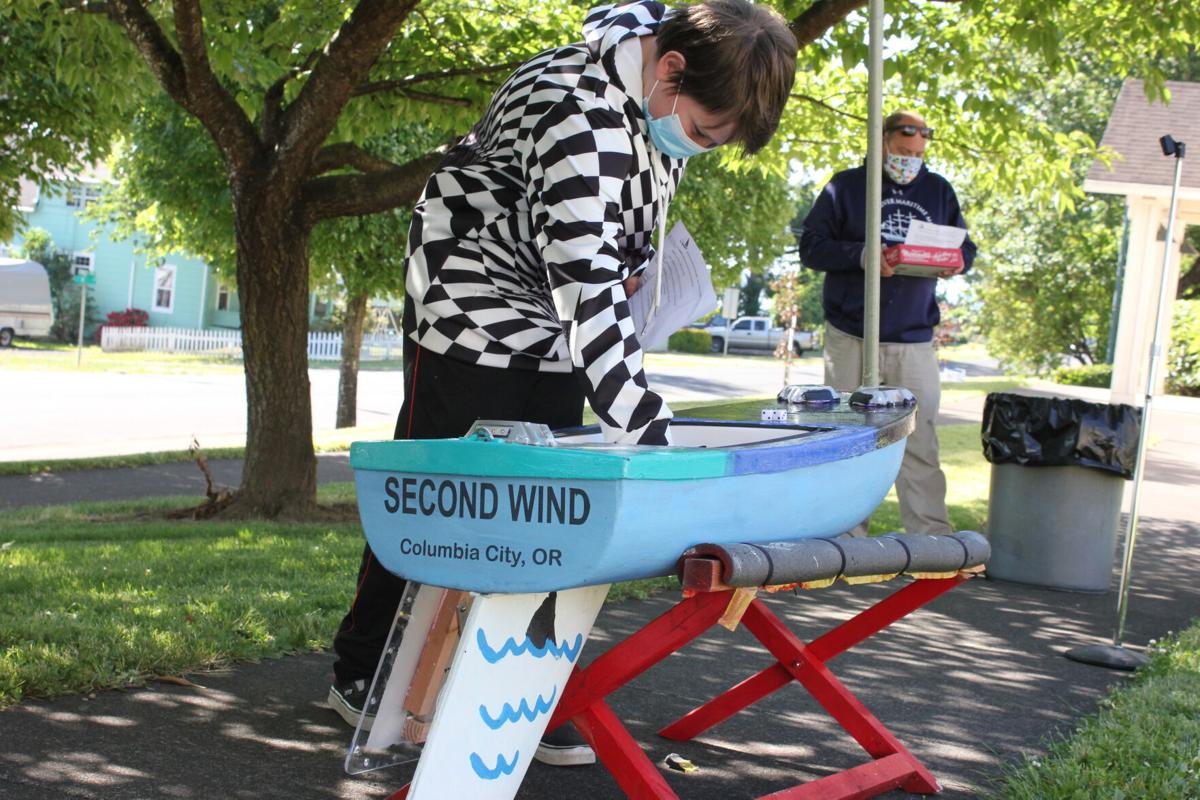 A student places flags inside the miniboat Second Wind. 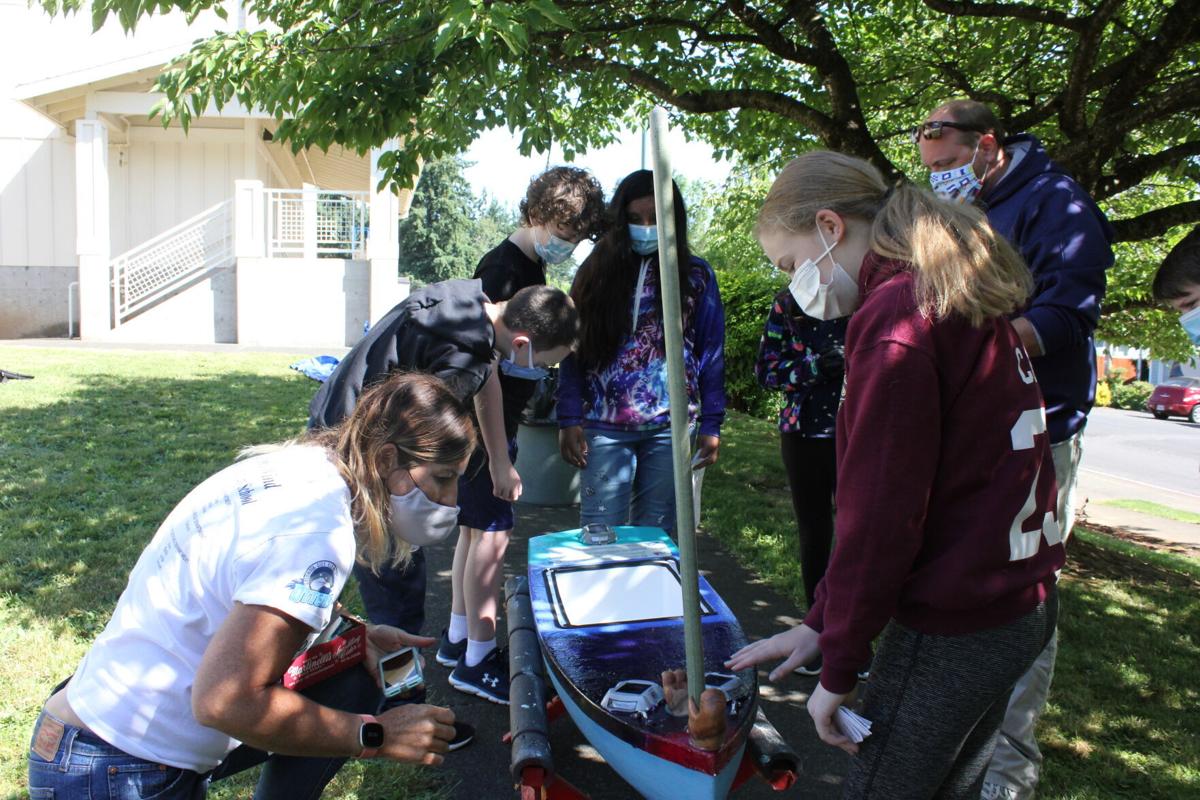 Students test the UV-powered lights that will let other ships know of Second Wind’s presence on the water. 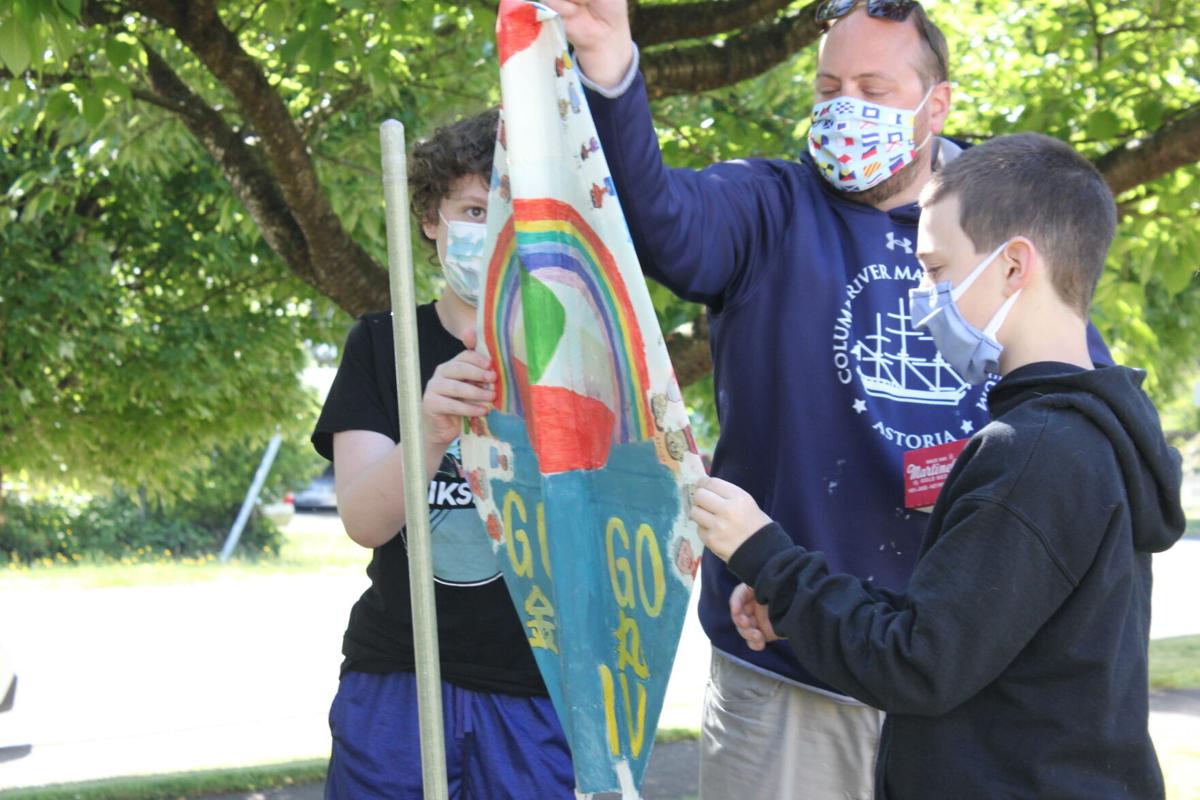 Visiting Japan might likely be a distant dream in most of our minds, but for one miniboat, designed and built by a class of Columbia City 5th graders, hitting Japan’s coast is in its near future.

An educational program out of the Columbia River Maritime Museum in Astoria, simply dubbed the “Miniboat Program,” is working with students at Columbia City Elementary to send a miniboat across the Pacific to a sister school in Japan, and students in Japan will also be sending a boat to Oregon.

But most importantly, the program gives students a chance to practice thinking and making decisions for themselves.

“There's so many things where adults are telling kids what to do. And this is a total opposite,” Sandel said. “You know the kids make every single decision about this boat on their own. No adults are telling them what to do, and then they also choose what job they want. And that way, every kid's being engaged because some kids love the messy stuff and some kids are like ‘No, I want to write letters on the computer, and I want to study ocean products,” so it has a spot for every type of learner in the program.”

Through the Miniboat Program, students take on roles as quartermasters, sail designers, keel engineers, cargo trackers, and documentarians. Along the way, they learn real-world skills and make friends overseas while they track their boats online, which are packed with mementos curated by the students.

Following the 2011 earthquake and tsunami in Japan, debris from the country washed up on Oregon and Washington shores. One of those items, a fishing vessel, is now on display at the Columbia River Maritime Museum.

That boat and its journey across the Pacific Ocean became the inspiration for building the Miniboat Program, said Sandel. Since the program’s start in 2017, 1,213 students on both sides of the Pacific Ocean have been involved in the launch of 24 miniboats, traveling a total of 55,236 nautical miles (and climbing daily). These boats are tracked daily and students are still building on the skills they honed to launch them.

The boats contain sophisticated GPS tracking systems, so that Sandel and his team can track the boat’s journey and locate the boat once it hits land (hopefully in Japan).

This is Columbia City Elementary’s second year participating in the Miniboat program, said 5th grade teacher Yvonne Lewis. Lewis taught the class last year, which sent a boat named “Filbert” out to sea. Since its launch last year, the boat has landed on one of the Marshall Islands. Unfortunately, Sandel said his team has been unable to contact the people who received the boat, but Sandel hopes to make a trip once COVID-19 has subsided and he knows the people on the island are vaccinated.

On June 4, one week before this year’s boat launch, the Lewis’s class rehearsed the boat’s christening ceremony. True to its aim, the program mimics the real construction and christening of a boat. The ceremony is a “hybrid between America and Japan,” Sandel said—with both American and Japanese boat christening practices.

Before Lewis’s class can launch their boat, named Second Wind, they will perform a ceremony in front of school staff and family—including naming the letters and gifts they will place inside the boat for the students of their sister school. The students have collected Oregon, Columbia City, U.S., and Japanese flags to place inside the boat, alongside state stickers and sea otter themed gifts (an homage to the Columbia City Elementary mascot, the otter).

In addition, the students affixed a wooden otter figurehead to Second Wind’s bow. The inside of the mast was painted by the sister school’s students, and the outside was painted by the Columbia City students—a tradition, said Sandel.

At the end of the ceremony, the students will officially christen the boat by breaking a Martinelli’s bottle on the side (in lieu of Champagne).

Then Sandel will take the boat out to sea and launch it from whichever location 75 miles off the Pacific coast that the students decide to send it off from. In the past, students have selected coordinates off of Canada or Mexico’s coasts, and Sandel partnered with the Coast Guard to launch the boats. This year’s launch location was still unconfirmed, as of press time.

In addition to learning about oceanography and boat design, the program offers students a chance to learn about Japanese culture.

When asked what they had learned about their sister students in Japan, Lynda Rigdon, one of the students involved in the miniboat program said, “In the beginning of the year we learned a bit about their traditions and what places they like to go, and even what restaurants they like.”

Second Wind will be christened during a private ceremony on June 10, and students hope to see Second Wind land in Japan as early as November.

The miniboat program was a once in a lifetime experience, but students hope to have more nautical and intercultural opportunities in the future. “I would definitely do this again. I thought it was a lot of fun,” Piano said.

Follow the mini boats adventures here online and in the Wednesday print editions of The Chronicle.

We might not be traveling far these days, but a 5-foot long GPS-tracked miniboat, designed a…