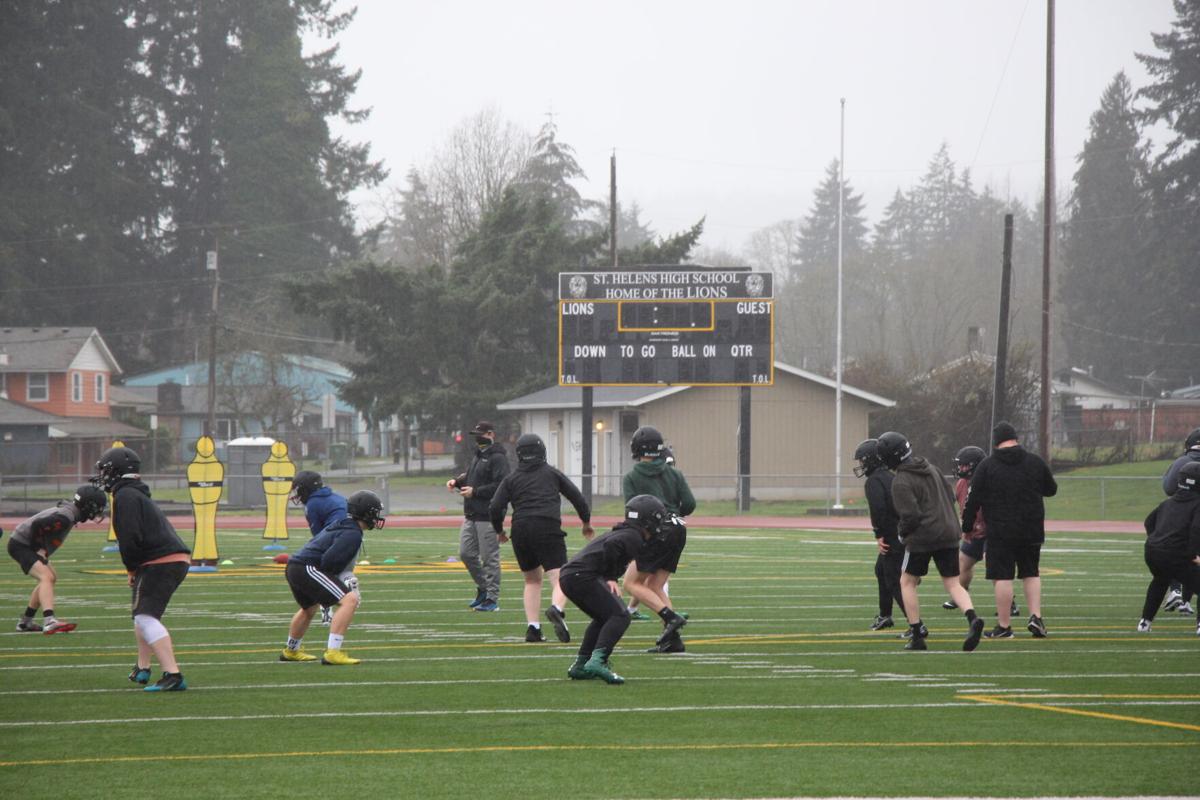 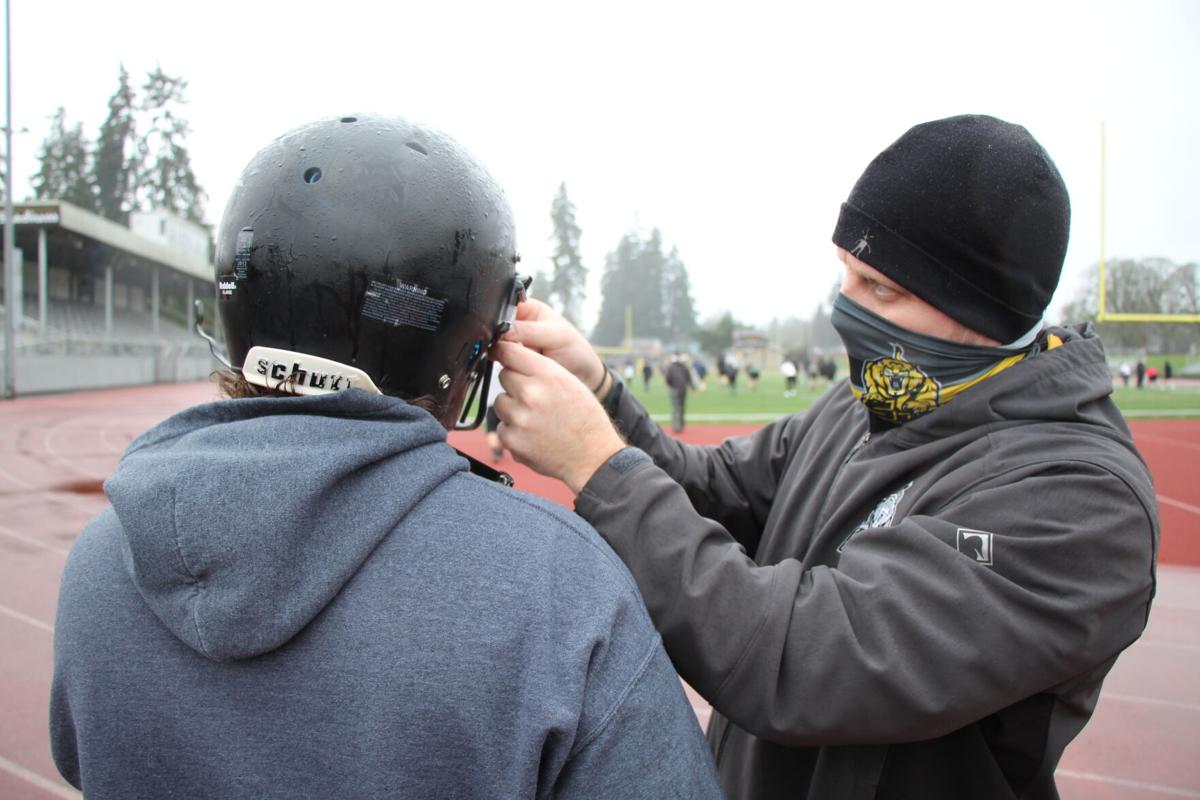 St. Helens High School Head Football Coach Cory Young adjusts a helmet for one of the student players before drills. 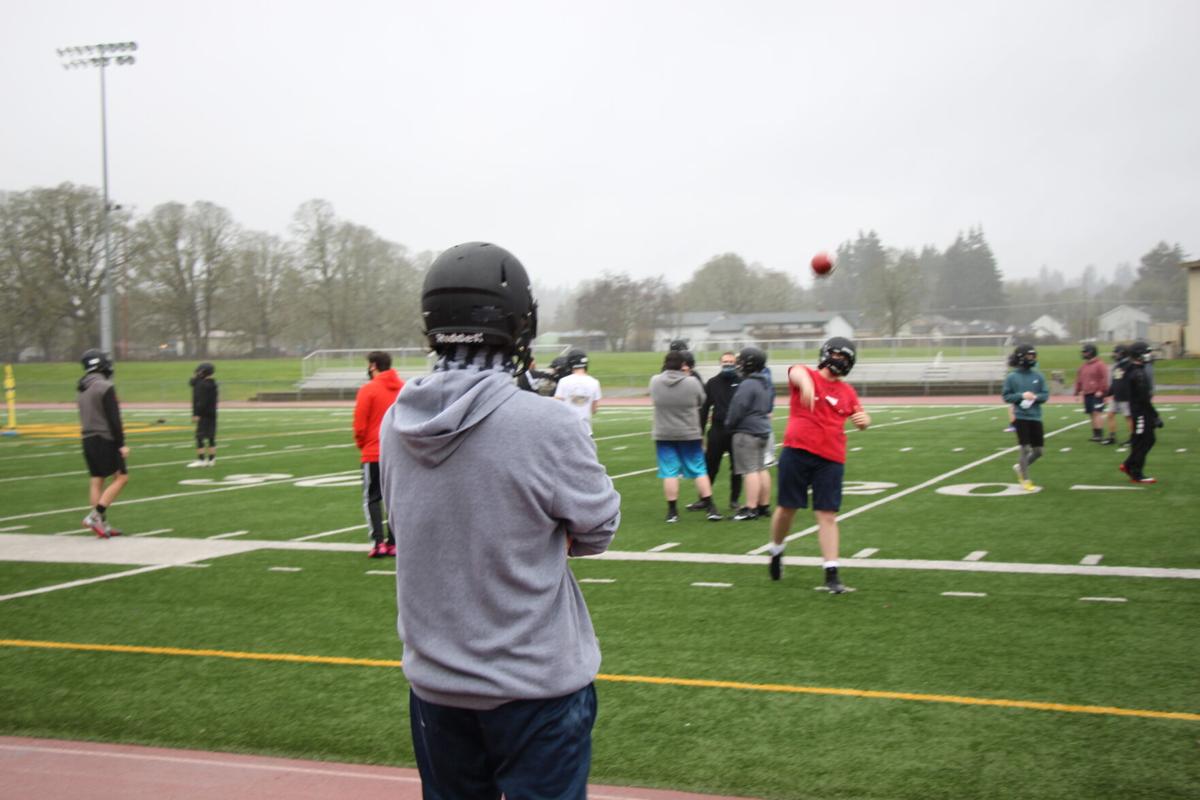 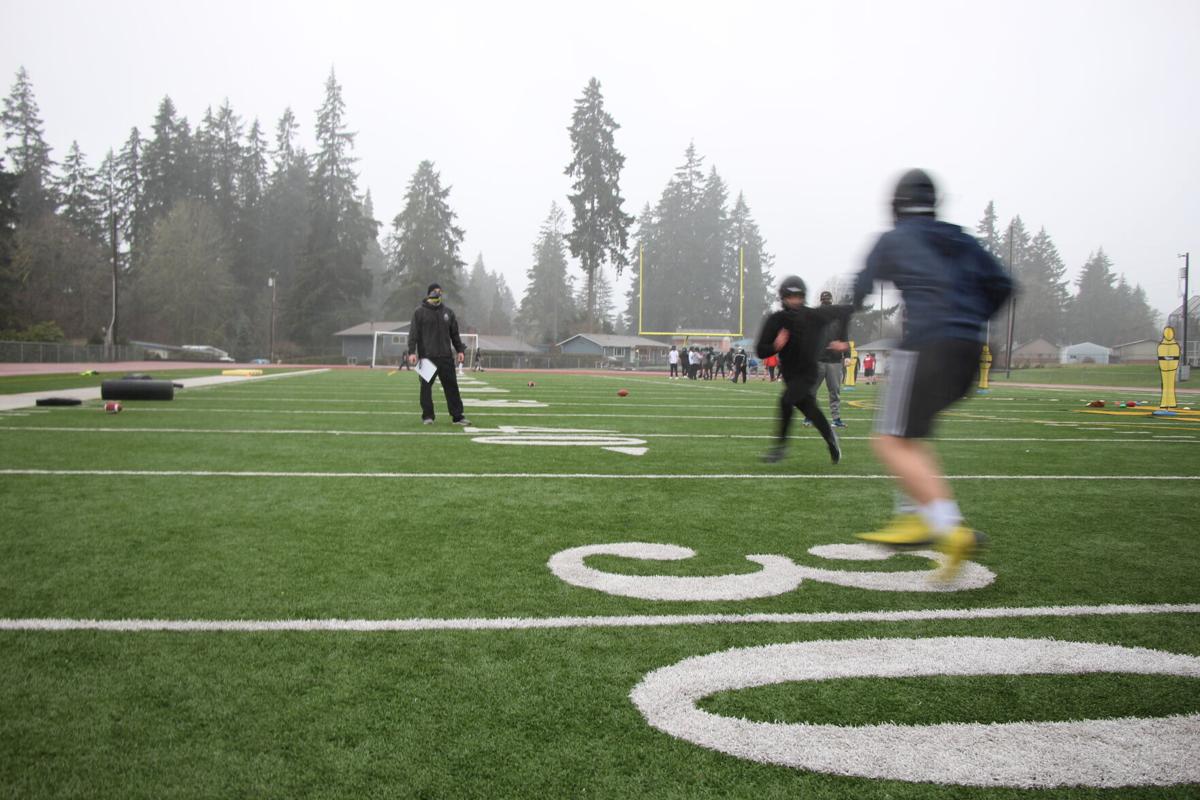 You can feel the excitement in the air and see it in each play.

“It is a milestone,” SHHS Athletic Director and Assistant Principal Ted Hirning said. “This whole year has been in flux. We weren’t sure would could play and the kids were down.”

Under Oregon Schools Activities Association (OSAA) guidelines, high school football practice began on Feb. 8. This week, SHHS players are able to pull on their helmets for practice. Next comes pads, following that the entire football attire, spread over a regulated time frame.

Hirning said each step of the way the coaches and the players are closely following state and county health and safety guidelines in place to prevent the spread of COVID-19.

Approximately 65 kids have turned out for SHHS football for the short fall season that will see five competitive games, which will include matchups against Hillsboro, Wilsonville, Canby, Forest Grove and Scappoose.

“The main thing is we wanted just to get them back out here, being involved and back in school,” Hirning said. “They’ve been gone at home for so long and they just want to get back with their peers and their coaches. That is our priority, just to get them engaged this year, and we are using this opportunity as the platform to do that.”

Hirning said high school sports can be a motivation for the students.

“It keeps them engaged in school, he said. “That’s their carrot. In athletics, they have to stay eligible and they like being on the field and on the court and engaged in the games and the competition.”

Participating in sports involves the students both in the classroom and in life, according to Hirning.

“They are building life skills, such as team work, that helps them go on, so that is a huge character development that we focus on,” he said.

SHHS head football coach Cory Young said even though the fall football season is different this year, it is still important for senior players.

“They have the opportunity to play one last time with their buddies,” Young said. “It is something you don’t want to miss as a senior. And for the younger kids, it’s a chance to develop and build for next year.”

Young said he and his assistant coaches were disappointed when the season was disrupted by the pandemic.

“We are just grateful for what we have now,” Young said. “We know what it is like to be without football, Now, we have it back and we are just lucky to have it.”

SHHS cross country, soccer and volleyball teams have also launched their fall practice and head into competition in March.

In the abbreviated and adjusted fall sports season, St. Helens is set to host Hillsboro Friday, March 5. While no fans are allowed at the games under the pandemic restrictions, cameras are mounted on the center of the SHHS stadium press box and in the school’s main gym, allowing subscription-based video live streaming of the competitions.

The school district covered the approximate $5,000 cost for the video equipment.

“The nice thing is that the other schools all have them, so when we are away fans can still see the games and that makes it nice,” Hirning said.

For the student players, Hirning said not having fans at each game is disappointing but should not be overly impactful.

“The fact that they have seen it on TV at the pros and college games, so it won’t be a big shock,” he said. “Right now, they are just happy to get out on the field.”

For details about subscribing to the video game presentations, call the high school at 503-397-1900. Check out the SHHS sports schedules at the school’s website and watch for special sports previews at thechronicleonline.com and in the Wednesday print editions of The Chronicle.

"The main thing is we wanted just to get them back out here, being involved and back in school."