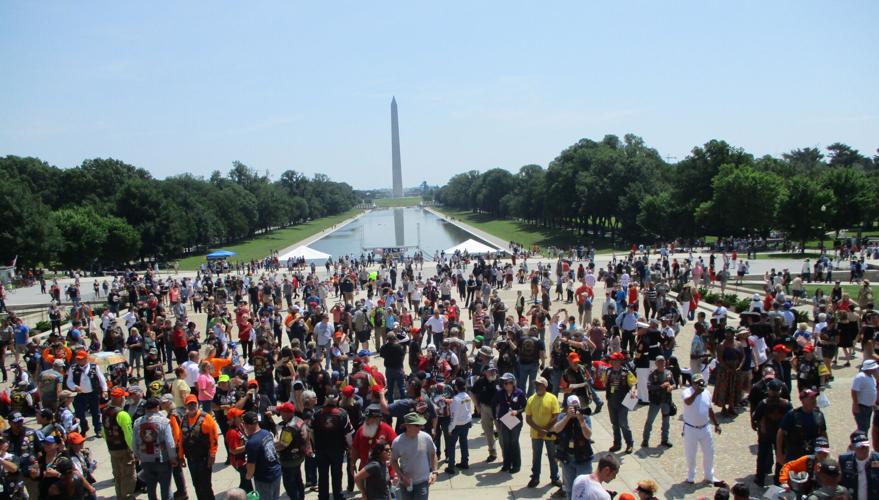 Local Vietnam veterans Doug Walker will be joining thousands for the Run For The Wall. 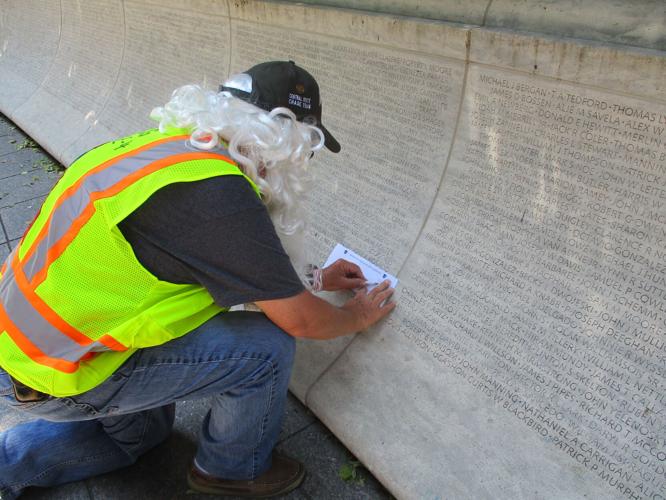 St. Helens Police Office Claus making a rubbing of the name 'Ralph Painter' from the National Law Enforcement Wall in Washington, D.C. during a previous Run for the Wall. 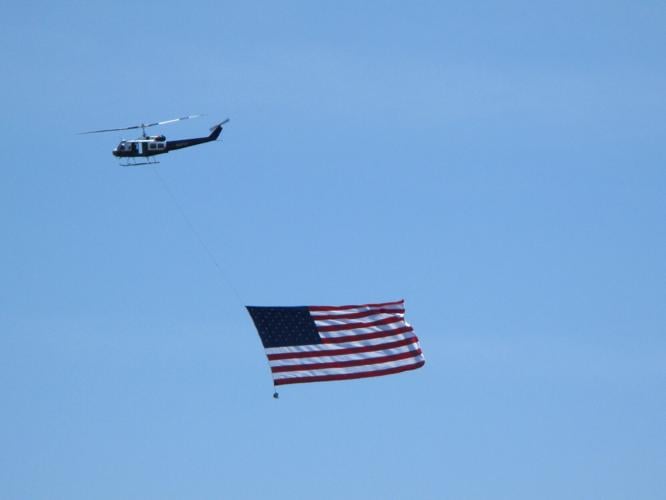 A helicopter flies over Washington, D.C. pulling a large American flag during a previous Run for the Wall. 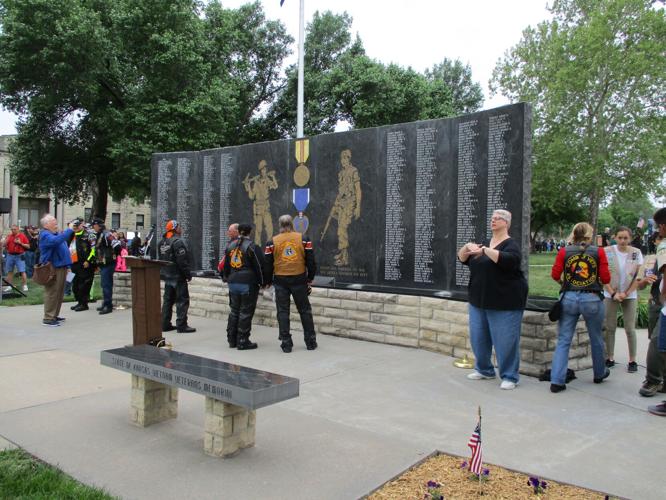 Veterans gather at a memorial wall during the Run for the Wall in Washington, D.C. 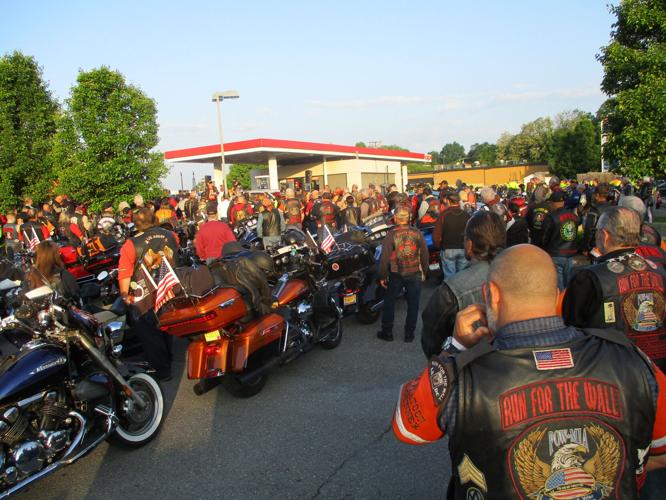 Participants in a previous Run for the Wall assemble at a rest stop. 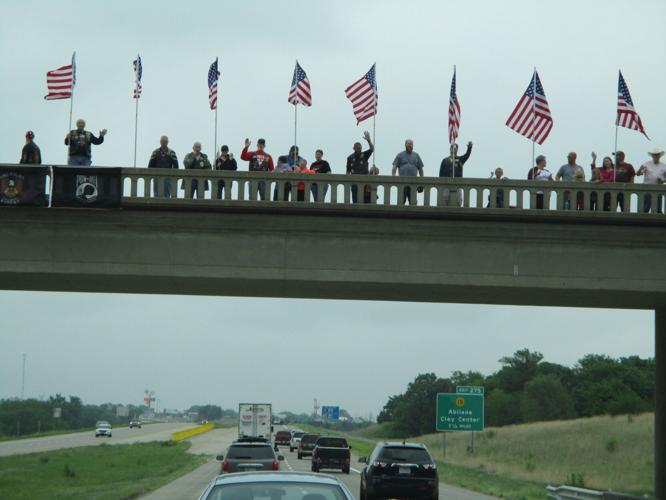 Supporters of the Run for the Wall staged demonstrations along the route to Washington, D. C.

St. Helens resident Doug Walker is preparing for a journey across the nation as a participant in the annual Run for the Wall.

Walker leaves May 11 for Washington, D.C. to take part in the annual Memorial Day weekend event to recognize veterans and to help raise awareness for prisoners of war (POWs) and those service members missing in action (MIA).

The run began in 1989 after a retired sergeant from San Diego assembled a group of motorcycle riders to travel from southern California to Washington, D.C. to participate with the Rolling Thunder motorcycle rally designed to maintain awareness of POWs and MIAs, according to Walker.

The event has evolved into an annual tradition that brings together thousands of veterans and others from around the nation. Walker will join other Oregonians and an estimated 1,300 participants leaving from Ontario, California.

Because this will be such a large event, Walker said there will be three separate groups taking three separate routes across the country to Washington, D.C. The participants will meet the Friday before Memorial Day in Arlington, Virginia.

“An event is scheduled Saturday morning, May 28, at the Arlington National Cemetery’s Tomb of the Unknown Solider and from there we go to the Lincoln Memorial for a group photo of all three groups and from there they walk over to the Vietnam Memorial Wall for a ceremony to complete the mission and that is the end of the event.”

Walker said the event is quite emotional, especially for those men and women who served in the Vietnam War.

Walker said the Vietnam veterans came back from the war in the 60s and 70s to face a tremendous antiwar movement and never got the recognition that occurred after World War II where there were parades and big events to welcome all the soldiers home.

“So, this event (Run for the Wall) has become a healing event for veterans who didn’t receive that welcome home and they are also with many like-minded people, so there is a very healing feeling being able to just communicate and be around others with similar emotions.”

Walker said the Vietnam veterans visiting the Memorial Wall will experience “tremendous emotions” because they were involved in the war, and they will likely be joined by family members and friends who lost loved ones in the Vietnam conflict.

“It’s just a very, very emotional experience,” he said. “I am a Vietnam vet and it is pretty emotional for me, that’s for sure, because I am thinking about the 58,000-plus names on the wall (that) didn’t come home.”

Walker describes his time in the military service as something he is very proud of, “but not being recognized for that back in the 60s and 70s was pretty hard to take at that time,” he said.

The attitude has changed across America today, according to Walker.

“With the change in most attitudes by American citizens regarding our returning service men and women that welcome that we didn’t get then, we are getting now, and we are also making sure that returning veterans from the present-day conflicts are not treated the same way we were back in the 60s and 70s,” he said.

Walker said the Run for the Wall is also important beyond a healing event.

“It is a way for us to keep the pressure on the U.S. government to keep trying to find our MIAs and our KIAs (Killed in Action) and to return them home,” he said. “That’s very important for the families who lost their loved ones. So, by spreading this message across the county we are helping maintain awareness through social media, newspapers and television that those soldiers are not all home yet.”

According to Walker, there are more than 100,000 soldiers that have not been re-patriated.

“Many are at the bottom of the ocean and may never be found, but they are still finding soldiers in the jungles of Southeast Asia and even some from World War II in European countries and the Pacific Islands,” he said.

Walker will be piloting a chase truck during his participation in the 10-day run.

“I will be supporting the others by driving along and if a motorcycle breaks down in the run along the route, I will load up that motorcycle and take it to a shop,” Walker said. “We are not going to leave anybody on the side of the road.”

During a fourth Run for the Wall called the Sand Box Run, dedicated to veterans in the U.S. conflicts in the Middle East, Walker will participate in the Alaskan Airlines Fallen Soldier Cart escort to Marseilles, Illinois before the Memorial Day weekend event.

Walker credits his wife for also supporting the Run for the Wall.

“I am pretty proud of what we are doing,” Walker said.

“I am pretty proud of what we are doing.”

Are you in favor of the City of St. Helens proposal to purchase a 30-passenger boat to enhance tourism?

Summer on Local Waterways: Fun, but watch for danger

Summer on Local Waterways: Fun, but watch for danger