"For someone who has been involved in agriculture my entire life, this is very personal for me," Columbia County Commissioner Margaret Magruder said. "It is challenging to continue to make a living with agriculture."

Magruder's comments followed the commissioners' deliberations Wednesday, July 14, on an application by the Port of Columbia County for a comprehensive plan amendment, zone change and goal exception to reclassify 837 acres of agricultural resource to resource industrial and change the zoning from primary agriculture to rural agriculture - planned development for the expansion of Port Westward.

Magruder, and Commissioners Henry Heimuller and Casey Garrett each gave tentative approval to the rezone following a presentation by the county's counsel and planning division manager who each outlined the process of review for the rezone.

The staff recommendation states, "the evidence and facts in the record show impacts can be rendered compatible with mitigation measures proposed as conditions of approval to this supplemental staff report."

"I wish and I hope that we find other crops that can be of value and that we can find more agricultural uses because that was the original vision of my grandfather when he reclaimed this land," Magruder said. "But I am looking forward to agricultural and industry being able to work together because the entire bases of reclaiming was for the betterment of the economy in the lower Columbia and I think that this will improve the economy."

Garrett said the staff report and recommendations provided a thorough job of evaluating the compatibility of the zone change.

"So I think the expansion of industrial opportunities out there can work just fine with agricultural and industrial needs," he said.

Garrent said Oregon is one of the most environmentally stringent states and with local, state and federal requirements someone would have to jump through for future development.

"So I feel pretty darn confident that future activities out there will have to go through more of a process than what I would prefer but that's the way it goes to ensure future compatibility for future development," he said. "I am very comfortable with supporting approval of this."

Heimuller said Columbia County is in a good position to develop base stock oil for renewable diesel through existing agriculture and that would be a favorable mix with the rezone for industrial development at Port Westward.

"It is the potential and it is the future we have to look at," Heimuller said.

"We have gotten further down the road in having good solid due process," he said. "So, I also support this."

While there has been support for the rezone based on its economic opportunities, there has also been opposition based on concerns about farm land erosion and environmental issues such as flooding and pollution.

Environmental watchdog Columbia Riverkeeper's Conservation Director Dan Serres said his group will appeal the commissioner's decision to the Oregon Land Use Board of Appeals.

"The Columbia County Board of Commissioners has run afoul by not protecting high-value farmland," Serres said. "The Port of Columbia County’s proposal to trade the county’s prime farmlands for dirty fossil fuel development like fracked gas-to-methanol refineries and oil-by-rail ignores mounting concerns about health, safety, and impacts to farmland and water quality.”

“This decision is a travesty,” said Jim Hoffmann, a blueberry farmer at Hopville Farms, located near the rezone area. “The Port and the County are turning back the clock on Oregon's land use progress with plans to pave over wetlands on the floodplains of the Lower Columbia River. The Port’s plans will put at serious risk high-value blueberry farms and other high-value crops like peppermint and spearmint.”

Serres said the timeline for the appeal will depend on when the county officially publishes the zone change approval and the following process "could play out for months," he said.

The rezone has been an ongoing debate since 2018. See the timeline attached and associated materials at the Columbia County website. 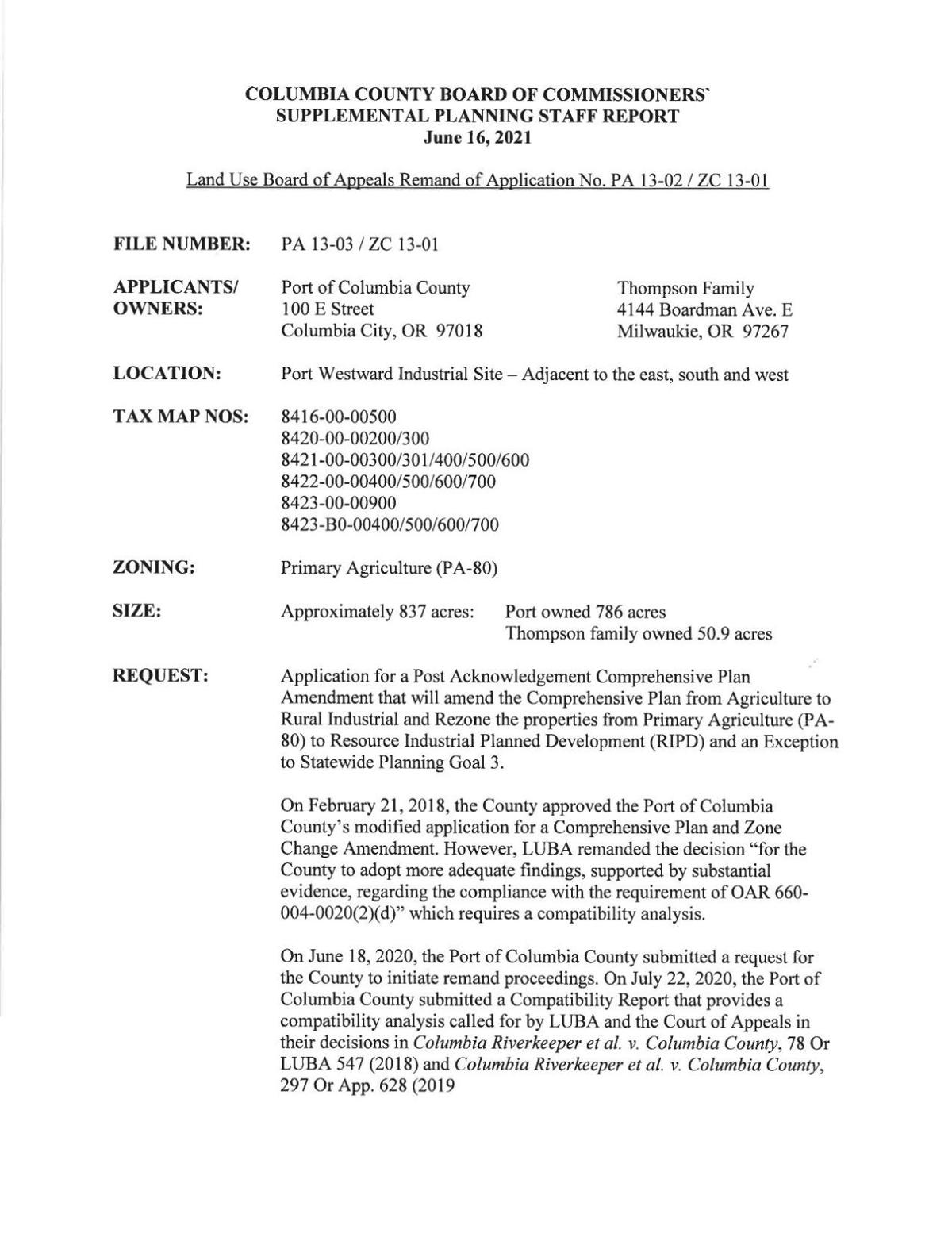