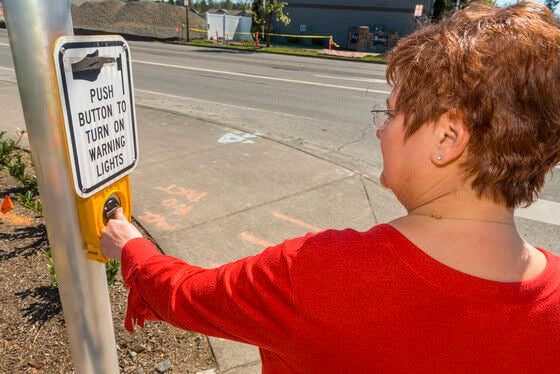 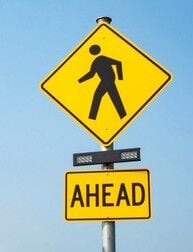 Motorists will see warning signs with the flashing lights when a beacon is activated.

In the next two years, the Oregon Department of Transportation (ODOT) plans to install more than two dozen new rectangular rapid flashing beacons, an increasingly familiar tool that has helped improve safety on major traffic corridors in the Portland area and around the state.

The rectangular rapid flashing beacons, also called pedestrian activated beacons, give people walking, rolling or biking an additional level of control over the traffic they face. The beacons allow them to activate flashing lights that alert oncoming motorists to people crossing the road.

On Thursday, Oct. 21, ODOT renewed these safety efforts with the release of three new videos reminding the public of the advantages the beacons offer. The beacons are a critical part of ODOT’s efforts to maintain a modern and safe transportation system.

ODOT started using pedestrian activated beacons on Portland area roads a decade ago and has found them an effective tool for improving safety on busy corridors, especially in areas with long distances between traffic signals.

"They provide an additional layer of safety and assurance for anyone crossing a busy road and play an especially important role in economically disadvantaged neighborhoods, areas with higher rates of pedestrian injuries," ODOT spokesman Don Hamilton said.

Michael Wallingford, who is sight impaired and uses a white cane, lives near Southeast 82nd Avenue in Portland. He has been encouraging ODOT to build more of the pedestrian activated beacons.

“ODOT listened to us,” he said. “These beacons help because they’re bright and everybody stops. They can’t avoid them. This is another level of security for me. As a blind person, you put a lot of trust in that person behind the wheel or steering their bike or riding their skateboard. I’m much more comfortable stepping off the curb with these beacons. They also vibrate, which is great. And they ping. I’d like more of them.”

"There's urgency in communities like those I represent in Washington County to drastically improve pedestrian safety,” Metro Councilor Juan Carlos Gonzales said. He represents northern and western Washington County. “High crash corridors like TV Highway require this level of investment and more as community members, many of which are underserved, risk their lives traveling along this corridor."​

In the course of planning these beacons, ODOT Officials said they heard thousands of comments from members of the community telling us about their trouble spots and suggesting ways to make their neighborhood roads safer. These beacons are one tool among many safety tools ODOT is bringing to local roads after hearing the public concerns.

No word yet if the new pedestrian beacons will be installed in Columbia County.