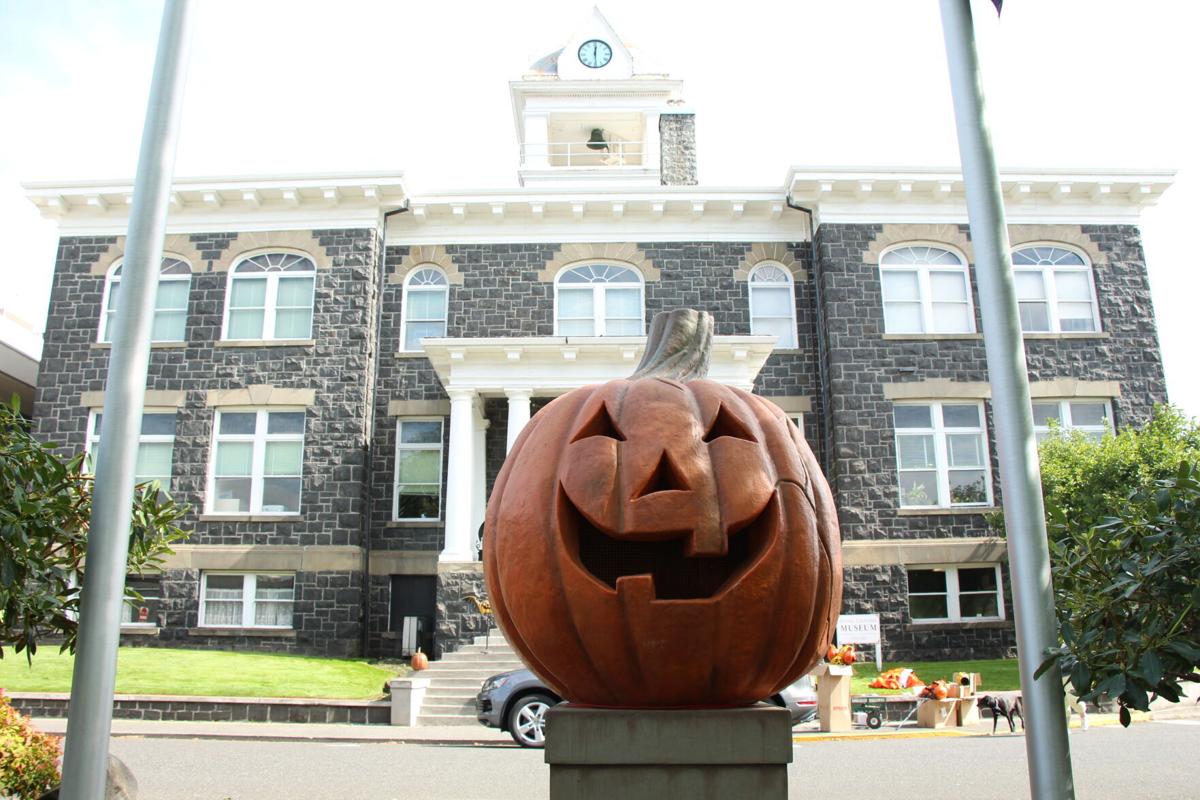 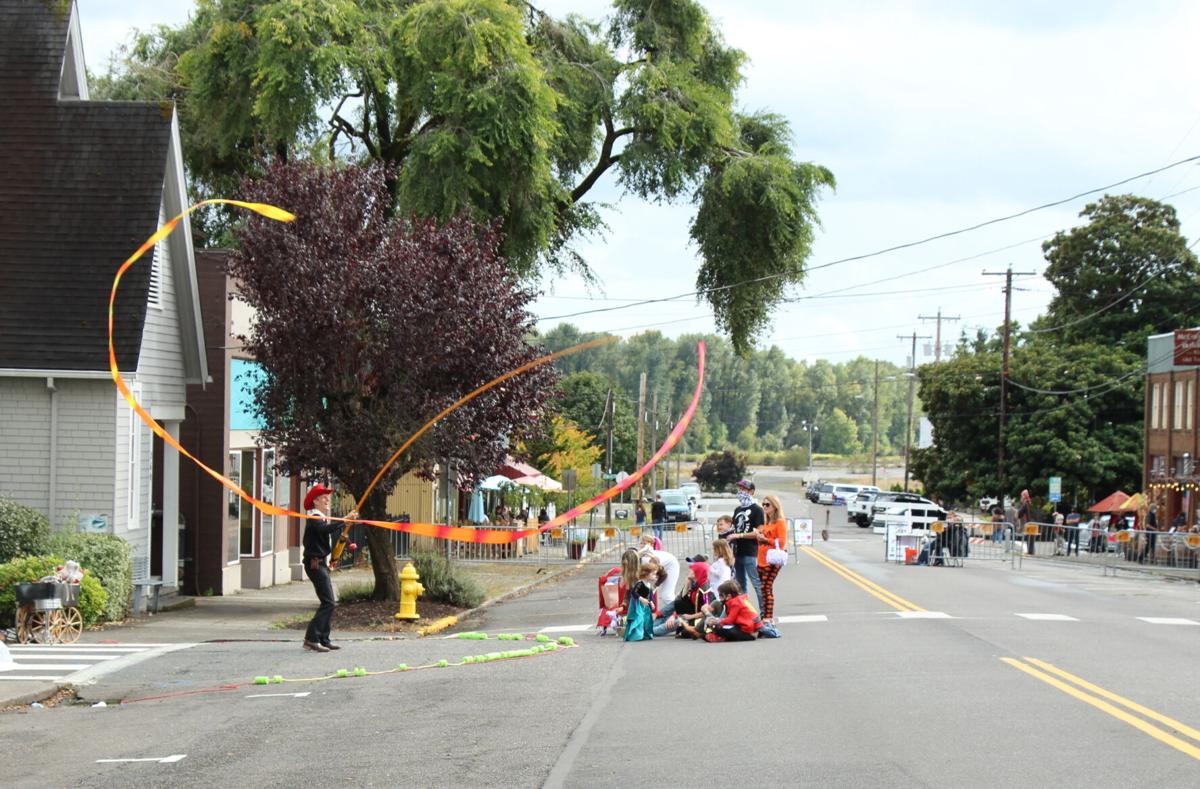 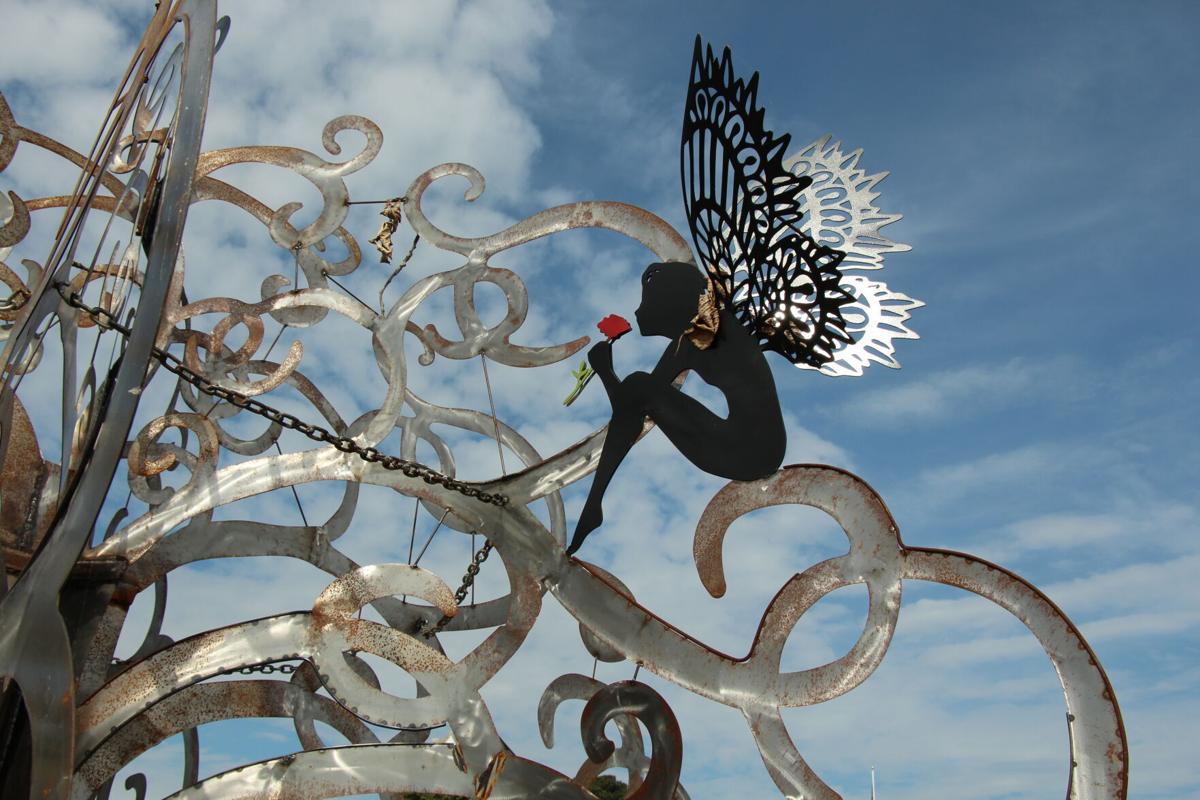 This art piece is part of the annual riverfront decorations placed each year as the St. Helens Oldrown District transforms into the Spirit of Halloweentown, a celebration of all things spooky.

Though Halloweentown sold out most days in 2020, the St. Helens signature all-fall event wasn’t quite the same.

Numbers were limited, vendors were scattered to avoid crowding, and attractions were restricted to socially distanced activities due to the pandemic.

This year, Halloweentown will be returning with all its beloved fixtures, plus some new attractions, according to city event coordinator Tina Curry.

In 1998, St. Helens served as a backdrop to the Disney Channel Halloween classic Halloweentown, and each year thereafter the city transforms the Riverfront District into the Spirit of Halloweentown, a celebration of all things spooky. The town becomes a  month-long event, attracting tens of thousands of visitors each year and offering “family friendly” attractions.

Occasionally, Halloweentown is host to special guests like the cast of the movie, which reunited in St. Helens for the event in 2017. The event has grown with each year, but in 2020, Halloweentown had to downscale a bit due to COVID-19.

Curry expects there to be more Halloweentown cast appearances this year, but the contracts aren't finalized at this point. The big draw though, said Curry, is the new additions to Halloweentown.

“We have four new attractions this year,” she said, listing off the new attractions—Whispers in the Woods (a scavenger hunt for hidden painted faces within trees around the city), The Art of Wade Lapp’s “Walk With Pumpkins” (a shuttle out to Sand Island for another Halloween themed scavenger hunt), the Pumpkin King Tunnel (a laser light show tunnel leading to a 20 foot Pumpkin King statue), and the new Dark Market (a Halloween themed shop that opened in May).

The general admission ticket, which is available online for $35, covers most attractions, with the exception of the Sand Island shuttle, which is a separate ticket.

Under the guidance of Curry, who has been contracted by the City of St. Helens for Halloweentown since 2017, the event will proceed with new attractions. Though it is too early to say what the exact COVID-19 guidelines will be this year, Curry said Halloween town will “be in compliance with governor’s orders as always.” Plus, Halloweentown is an outdoor event, which reduces the risk significantly, according to the Center for Disease Control and Prevention.

Continuing Halloweentown was a controversial decision last year, but Curry said the event was a success and no COVID-19 outbreaks occurred as a result. The main concern was that many of Halloweentown’s attendees fly into Oregon from other states or travel from other counties within the state. However, flying requires rigorous tests and vetting to prevent the spread of COVID-19.

“A lot of people fly here, so the airlines have already dealt with it by the time they get here,” Curry said of Halloweentown attendees being tested for COVID-19 prior to the event. “I would say that last year our audience was probably 90% from other locations.”

Whether you are a tourist or a local, Halloweentown will be available to everyone this year, though Curry isn’t sure whether they will cap attendance at 250, depending on the state and county guidelines.

“We hope enough to cover all the costs,” she said. Halloweentown relies heavily on outside financing, Curry explained. “We have to raise more than $250,000 to make Halloween happen.”

The majority of the financing for Halloweentown comes from ticket sales and sponsorships; Halloweentown doesn’t receive money from the city or taxes, she said.

Halloween has been a major city celebration and centerpiece for decades and includes an annual children’s parade featuring costumed kids; trick-or-treating at the local businesses’ front doors and people making creative scarecrows and hanging their displays all around St. Helens.

While Halloweentown is designed for fun and community engagement, it also provides a significant boost to the city’s economy, according to St. Helens City Administrator John Walsh who said in a previous published interview with The Chronicle that in many ways the event has transformed St. Helens from a fading mill town to a community recognized internationally as a top destination for Halloween activities.

“Halloweentown has created a sense of community identity and brought an economic boost to the region,” Walsh said. “The event draws tens of thousands of visitors each year throughout the month of October which stay in hotels, eat at local restaurants, shop at local merchants and experience all that St. Helens has to offer.”

“This is direct to businesses and merchant dollars,” Curry told The Chronicle in an August interview.

In addition, the City of St. Helens and sponsors have received an estimated value of several million dollars in media reach through magazine, newspaper, radio and social media articles and tourism-related articles, according to Curry.

“We’ve had almost one million people visit our discovercolumbiacounty.com site alone,” she said. “We’ve had individual posts that garner more than 24 million views. If you have to put an exact number to this it’s very difficult but our audits show very high results.”

Tickets for the 2021 Halloweentown are currently available online and will sell out quickly, Curry warned. Halloweentown will run all day, 10 a.m.- 4 p.m., Sept. 18 through Oct. 31 this year.

The St. Helens City Council is reviewing new ways to attract more people into the city.

How are you beating the summer heat waves?

Cool. Better get working on those "special guests" though. I'm fairly certain Marnie will not return.