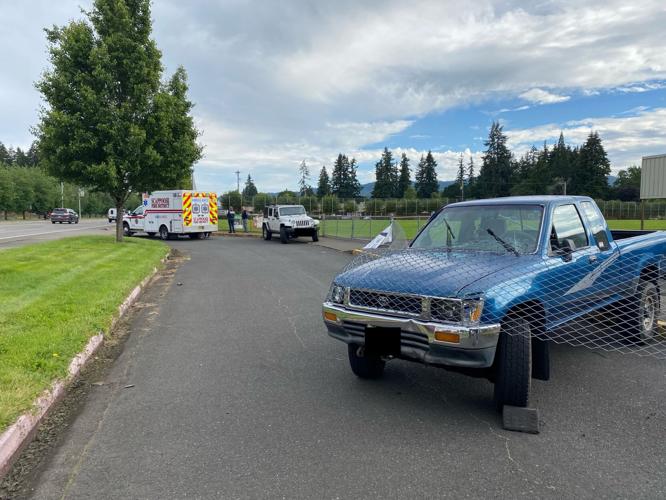 This vehicle's windshield is cracked in multiple places after plowing into a fence around the Scappoose Middle School campus on Wednesday, June 15, according to investigators. 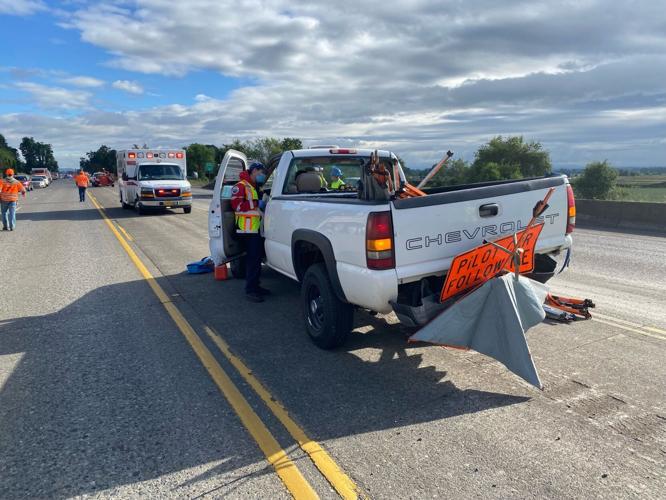 A first responder stands outside the driver's side of the rear-ended pilot vehicle on Highway 30 Thursday, June 16.

First responders are urging caution on the roadways after responding to multiple successive car crashes along Highway 30.

At 10:36 a.m. Thursday, June 16, Scappoose Rural Fire Protection District (SRFPD) shared a Facebook update that the eastbound and westbound lanes of traffic had reopened following a motor vehicle crash in the 50000 block of Old Portland Road.

"We wish to plead with our community and beyond; if you see road signs, SLOW DOWN!" SRFPD wrote in the Facebook post. "When workers present on or near the roadway, wearing highly visible traffic safety vests, please SLOW DOWN and PAY ATTENTION!"

At 5:09 p.m. the previous evening, SRFPD responded to a one-vehicle motor crash at the 5200 block of Columbia River Highway, near the Scappoose Middle School dropoff/pickup zone.

"The vehicle was traveling westbound (towards St. Helens) and swerved across both Eastbound lanes (towards Portland), then crashed through a fence, drove across a field before crashing back through another area in the fence," according to SRFPD.

SRFPD reported that the driver lost control of the vehicle due to a medical event. There were no injuries reported, and no other vehicles were involved.

The Chronicle asked Pricher if there was any risk of a student being struck by the oncoming vehicle had school been in session.

"As we said in our statement, thankfully, no one got hurt," he responded. "But I think we would all be hard-pressed that somebody wouldn't have noticed this and had a little bit of (an) opportunity to get out of the way."

Pricher said this kind of crash is not a usual event.

"In the 10 years I've been here, I've never seen anything like this at this location," he said.

The third crash happened Tuesday, June 14, at the juncture of Highway 30 and Scappoose-Vernonia Highway, according to SRFPD. Two motor vehicles were involved in the crash. One patient was evaluated and declined medical transport.

SRFPD data suggests that traffic accidents are seasonal and weather dependent. According to Pricher, SRFPD responded to four motor vehicle crashes in May, down from a high of 16 in February.

Pricher draws a connection between traffic accidents and driver inattention.

"It's not necessarily folks trying to text and drive or talk on the phone and drive," he said. "It could be listening to music too loud. It could be trying to eat or drink while you're driving."

Pritcher said that public officials are instituting more countermeasures, such as increased use of safety vests, signage, cones, and road flares to enhance public roadway safety.