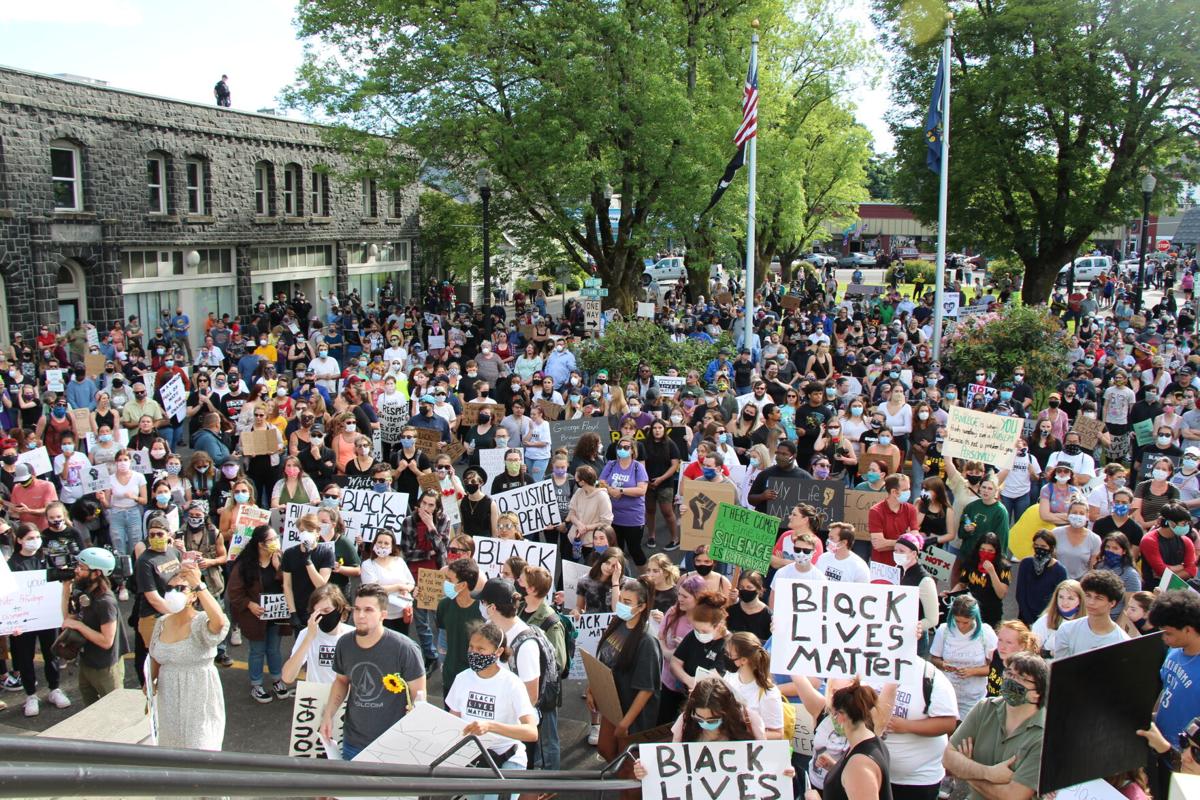 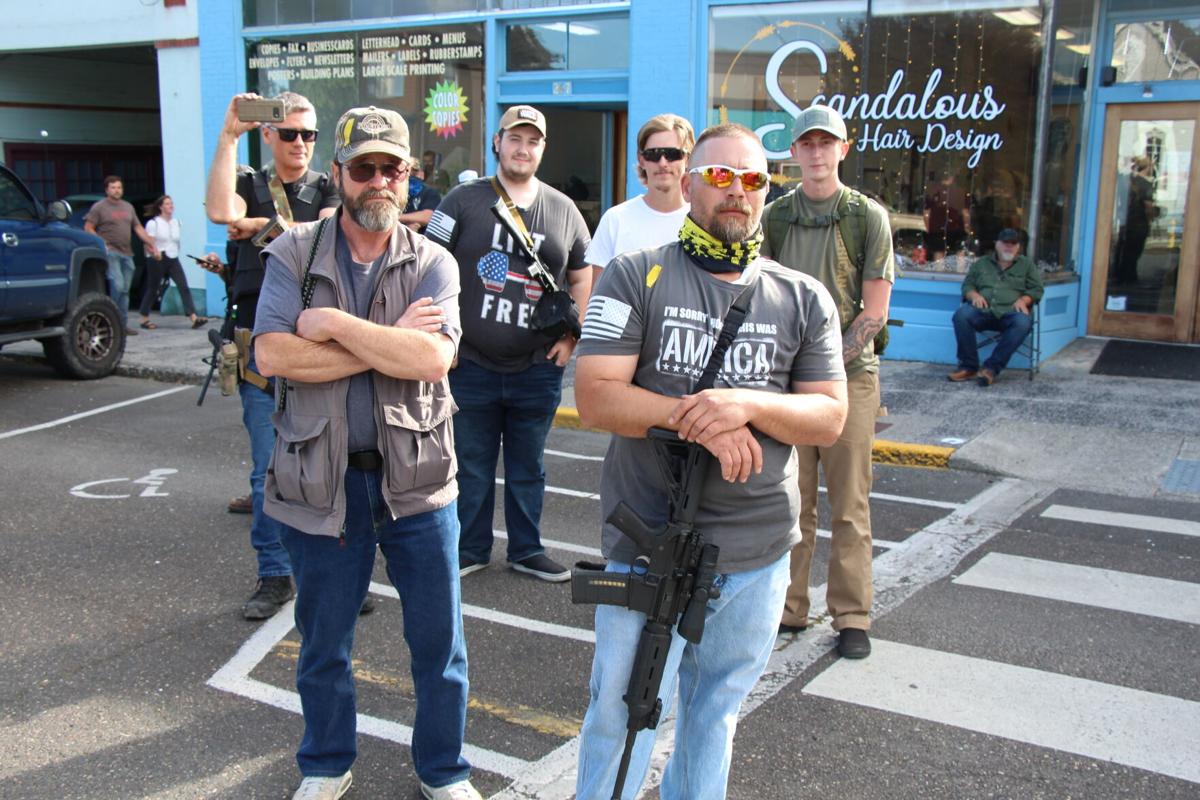 A few of those at the rally also brought their weapons. 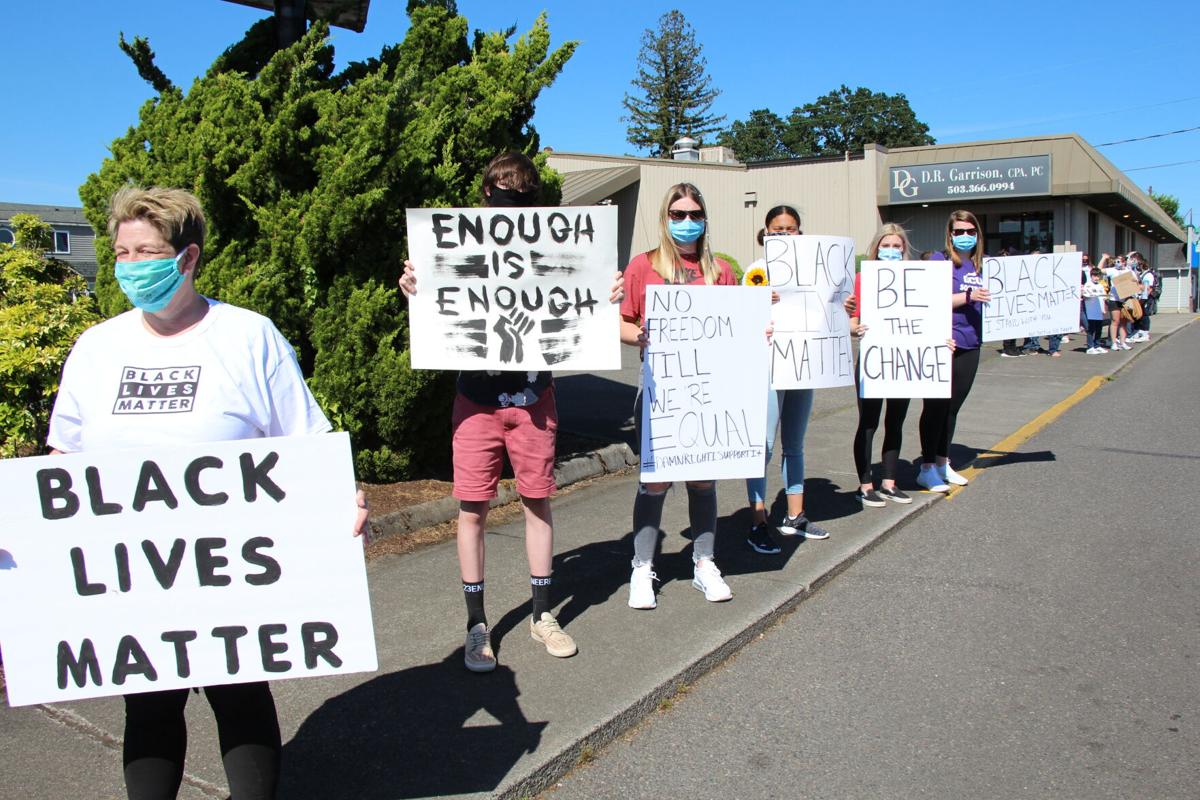 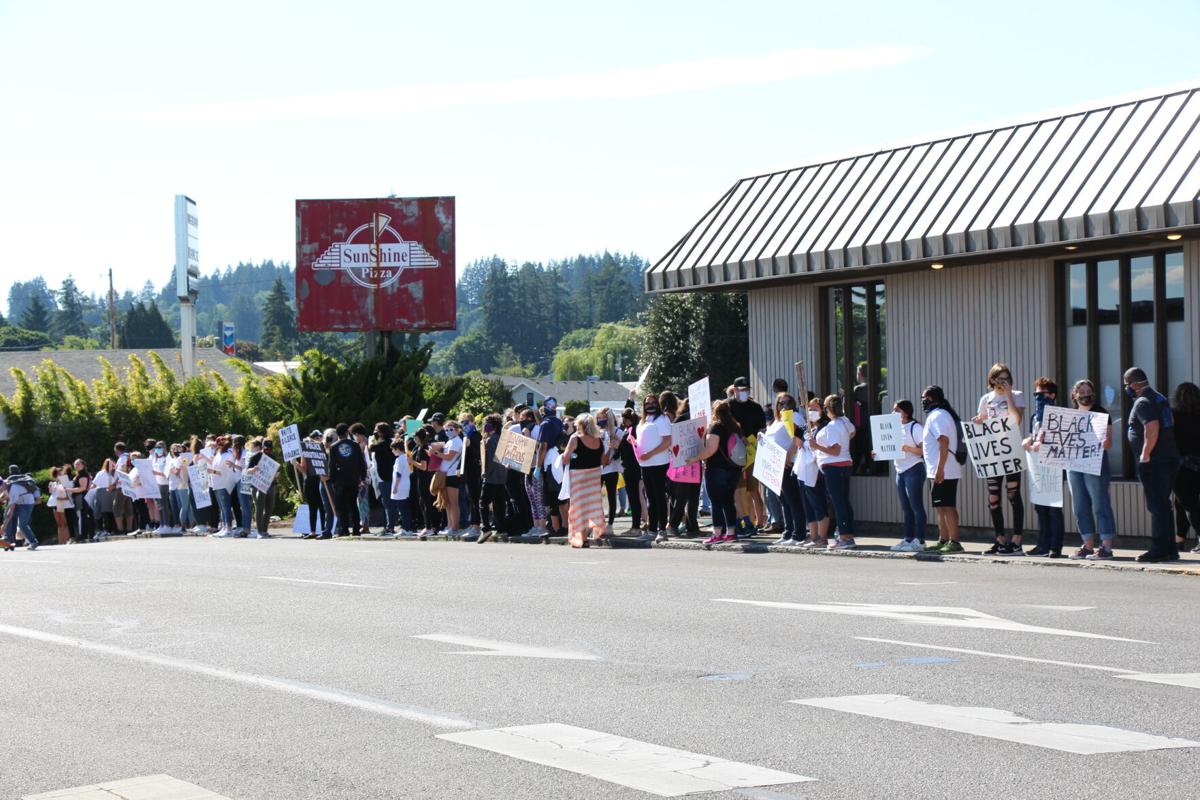 A long line of participants formed along Columbia Boulevard for the Black Live Matters protest. 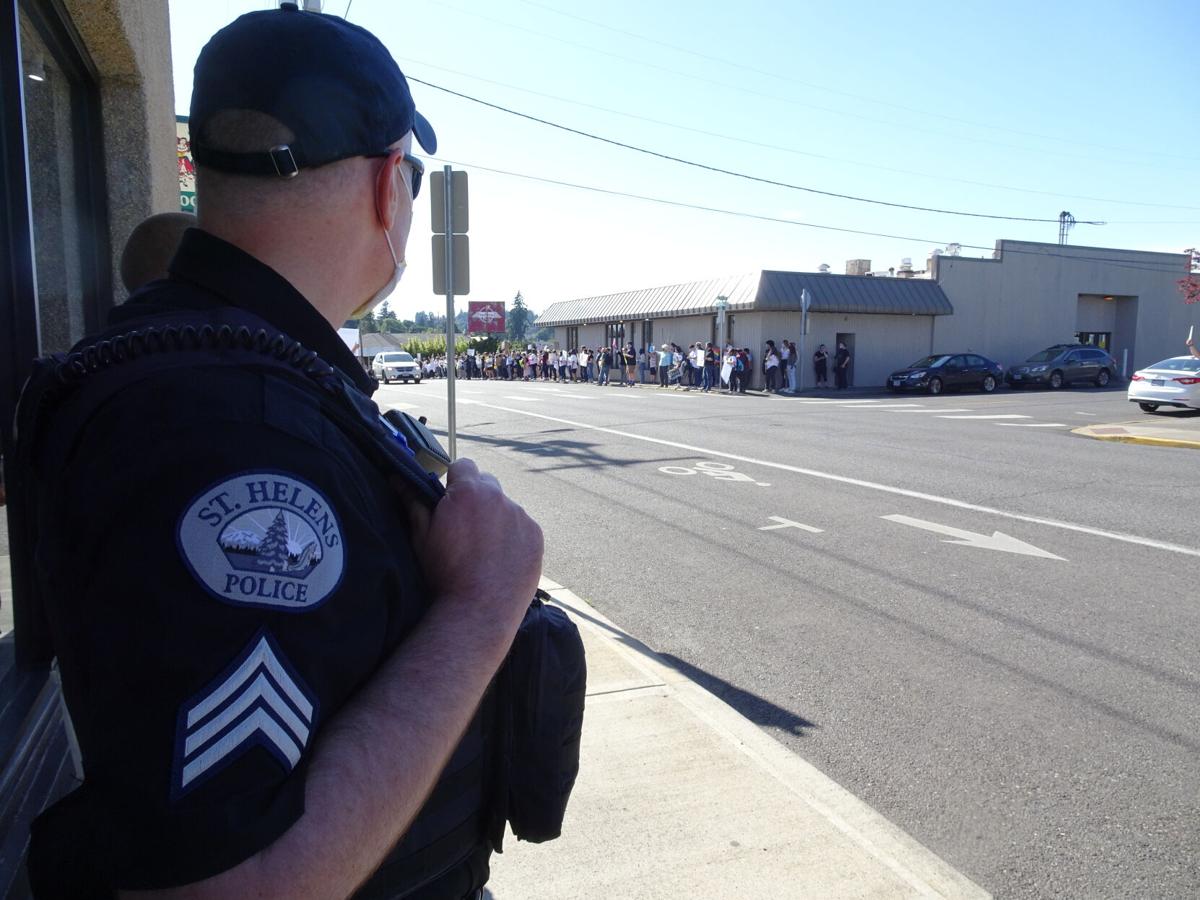 Police were stationed along the march route. 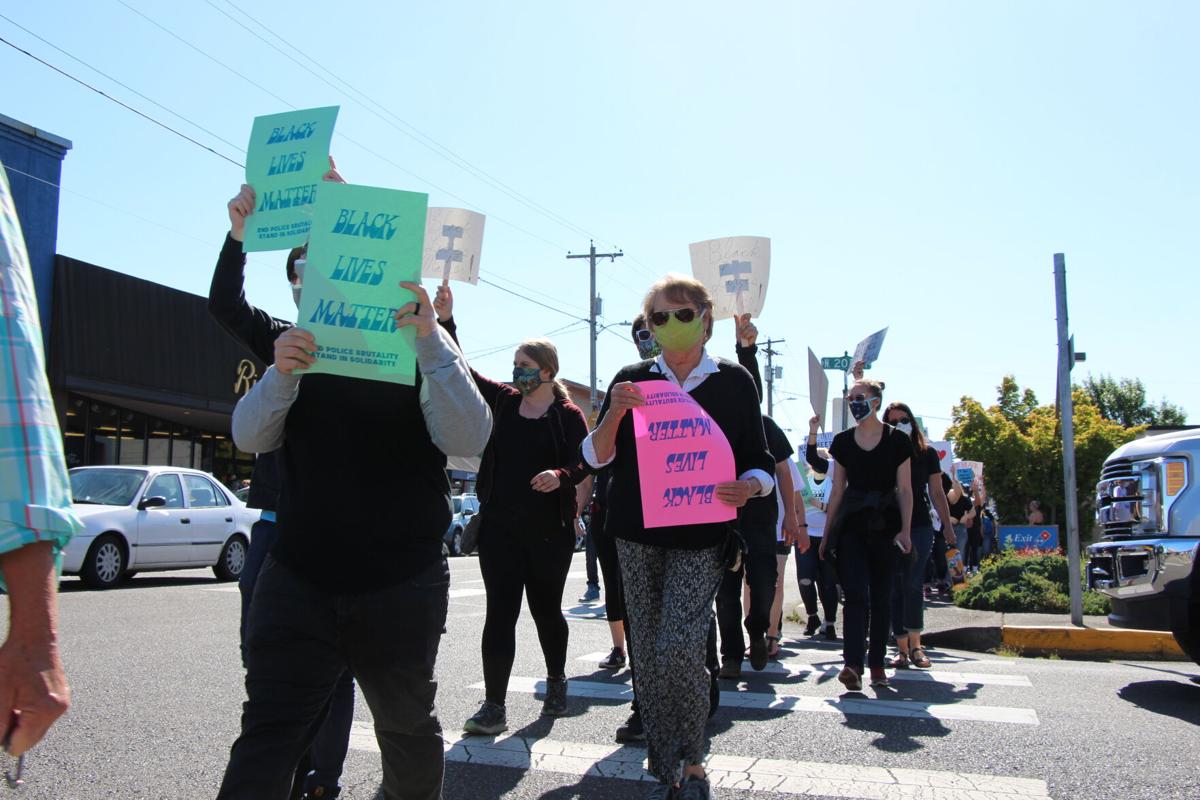 Marchers carried and displayed their thoughts on colored signs. 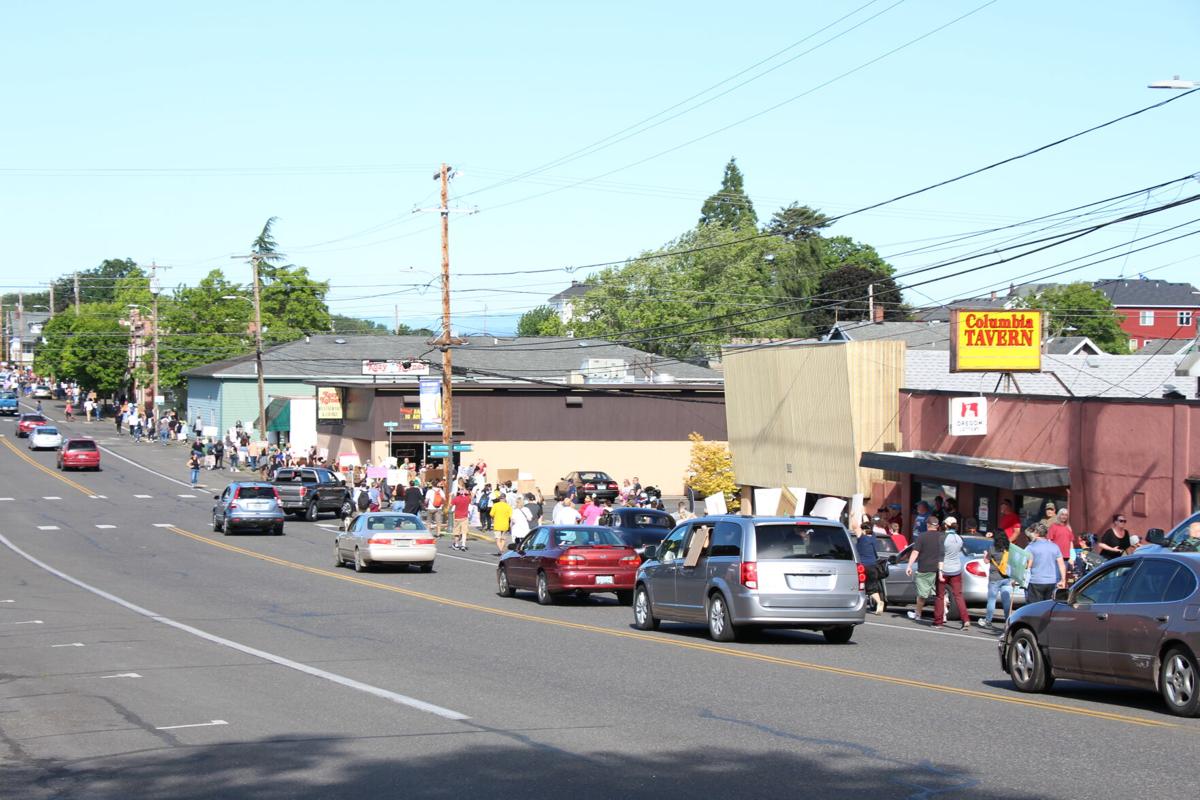 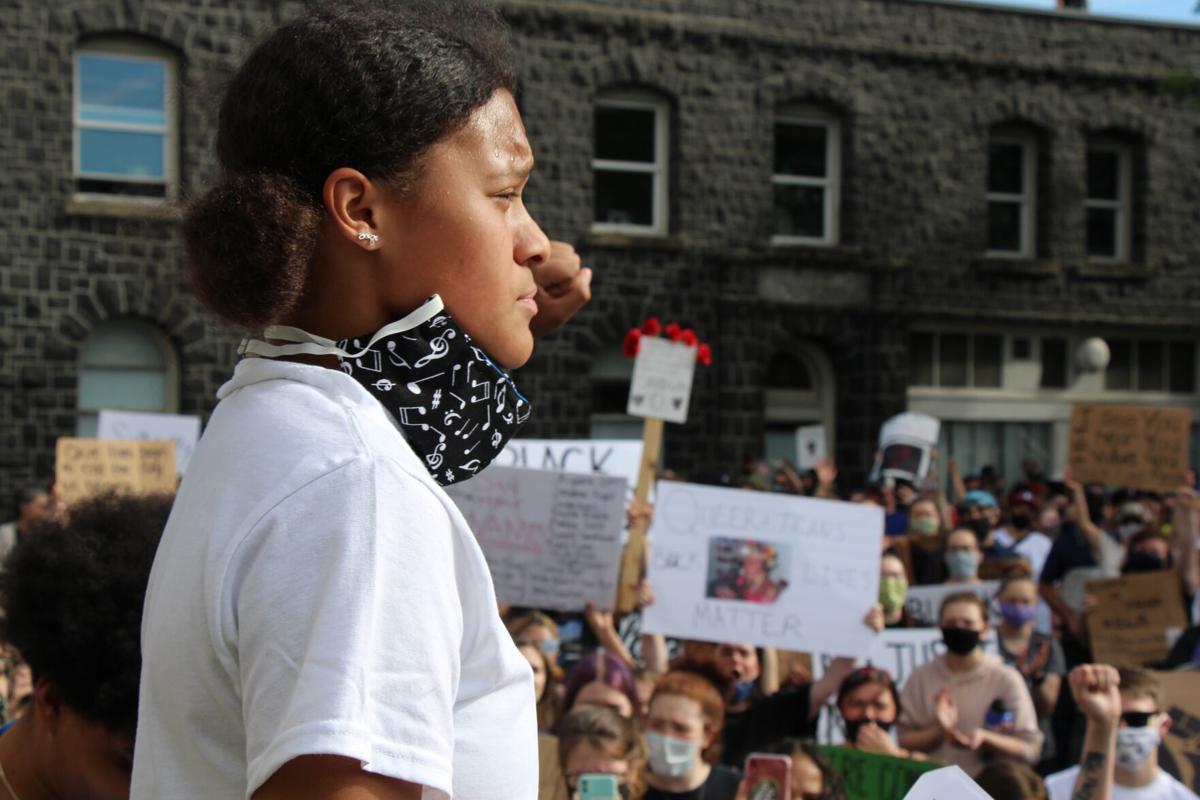 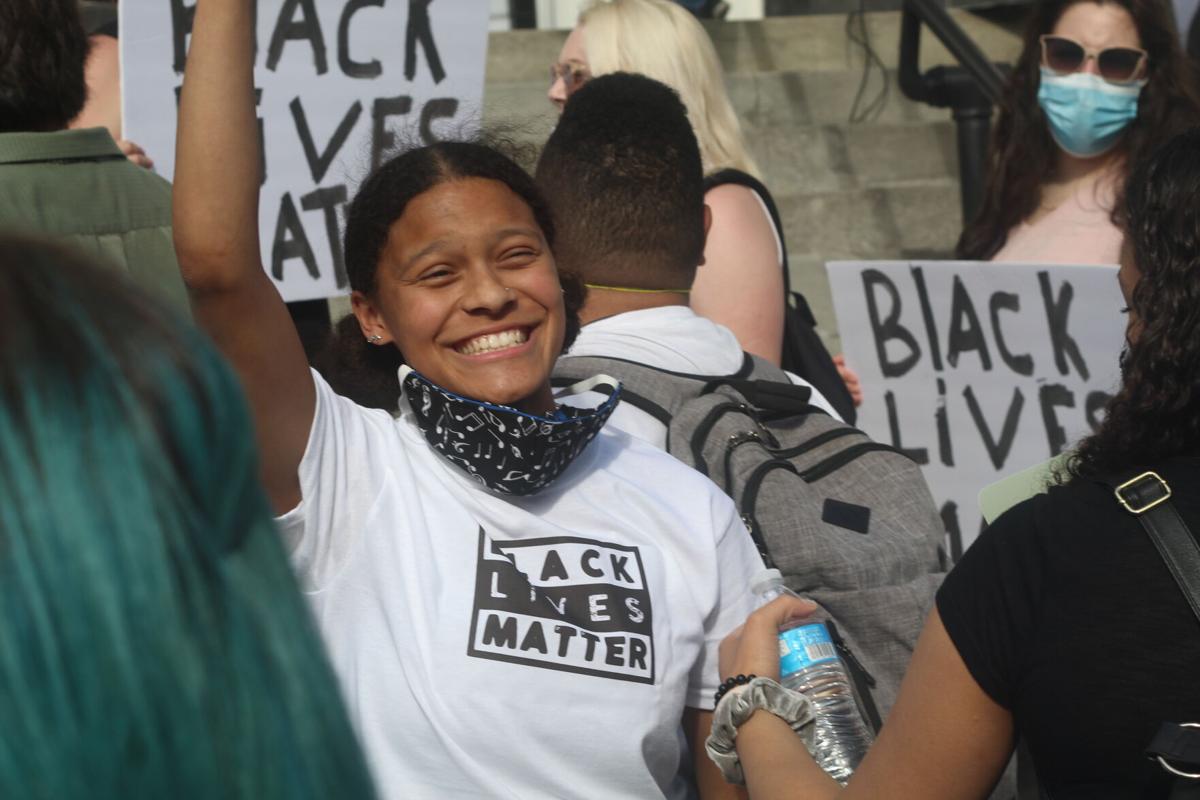 Marchers carried and displayed their thoughts on colored signs.

Several of those who took part in the St. Helens Black Lives Matter march and rally say they believe they are making a positive difference in stopping racism in America.

An estimated 700 people participated in the event late Wednesday afternoon, June 3. The march began just a few blocks east of Highway 30 along Columbia Boulevard and slowly moved toward the Columbia County Court House in Old Town along the riverfront.

As the marchers gathered in front of the court house, St. Helens High School senior Savannah Manning, a black teen, spoke to the crowd and read her thoughts.

"I do feel like I have accomplished what I came here to do today," she told The Chronicle after reading her speech that called for the community to come together to settle differences. "My voice has been heard and I hope it continues to be heard through the community and our county."

So what's next for this inspiring young lady?

"I hope to audition for the Portland Trailblazer Dancers and attend Portland Community College to become a dental hygienist," she said.

Scappoose Mayor Scott Burge spoke to the audience as the crowd moved to the waterfront park behind the court house urging those attending to step up and help local and state government find solutions.

"I hope that they feel empowered to work with our cities, the counties, the state and federal government to make the changes that are necessary," he told The Chronicle just after his speech. We need reform and we need to continue to talk but it and we are getting things changed."

Police on the scene of the march and rally said there were no major incidents of looting or business vandalism.

The City of St. Helens communication director Crystal King gave us insight to how the city handled the march and rally following the event.

The Chronicle: Give us a summary of how the protest went from the City's vantage point...any looting.. vandalism or other criminal incidents.. any arrests.

The Chronicle: We noticed police staged in several areas along the march route and at the waterfront.. did that presence make an effective difference?

King: Yes, it did. Our main priority was to ensure the peace and safety of everyone and to protect everyone’s rights during the event. We also knew that by having our officers there and being available to hear the concerns of the community, it demonstrated to everyone that we are listening and that we care about our community’s concerns.

The Chronicle: We also noticed a few people packing.. at least one or two with assault weapons.. standing along S. 1st Street. Was that legal and were there any confrontations?

King: Yes, it was legal under their Second Amendment rights. There were no confrontations. Those groups contacted the Police Department ahead of time to let us know that they would be there.

Prior to the march and rally, Mayor Rick Scholl issued the following statement.

"Our City does not condone racism. The City Council and all our departments support the right of each of our community members to protest peacefully as a meaningful way to call for change and shed light on injustice. It is a way for your voice to be heard. It is a way to express your pain, spark change, and move us forward.

We are aware of potential protests that may occur in our city over this week and that emotions are running very high right now. We are currently working with partner agencies to make sure that we are as prepared as possible to ensure the safety of our community members, our businesses, and of those who wish to peacefully protest.

When we look around the nation right now, we see many peaceful protests turning violent as agitators begin vandalizing businesses and destroying property. We do not want this for our community. I have received many calls from business owners and citizens expressing their deep concern about rioting and violence.

St. Helens is in the very beginning stages of attempting to recover from a pandemic that has been economically devastating for many of our community members and businesses. We are still operating under state orders requiring social distancing. Vandalism and looting hurts all of us. If you chose to protest, we ask you to do so peacefully. Destruction of our city is destruction of our community.

As we prepare for the coming days, the safety of all our community members is, and always will be, our number one priority."

The St. Helens march and rally followed those across the state and nation after the death of George Floyd, a black man who died while being restrained by police in Minnesota.

On Thursday morning, June 4, Oregon Governor Kate Brown ordered all State of Oregon flags at Oregon public institutions to be flown at half-staff in honor of George Floyd, who died on May 25 in Minneapolis, Minnesota.

State flags should be lowered to half-staff from 11 a.m. to sunset on Thursday, June 4. A memorial service for George Floyd will be held today in Minneapolis, Minnesota this afternoon.

“We lower the Oregon flag to half-staff to recognize a profound loss of life, one that affects us all,” Brown said. “As we mourn the loss of George Floyd, let us remember the many Black lives that have been taken by unnecessary violence. And let us commit ourselves, and our country, to fundamental change.”

Doctors, nurses and others staged A #WHITECOATSforBLACKLIVES demonstration at the Oregon Hea…

In Oregon and across the nation, marches and rallies continue in support of George Floyd, the black man killed while in Minneapolis police custody.

A Black Lives Matter billboard will soon be standing above St. Helens.

Photos / A Passion for Dancing: Hard work, but fun, rewarding

Get familiar with Tarter Farm and Ranch

The reporter is disingenuous for not reporting on the armed civilians who lined the march route, brandishing weapons at their neighbors and fellow columbia county residents, hurling insults and mis-informed bigoted statements. I personally saw adolescent children of these locked and loaded lunatics, terrified, clutching their rifles, and ready to...what? If this was a real news source, the Chronicle would report on these hate-mongers thinking the worst of their neighbors, treating them as the enemy. The article calls it a peaceful protest. IT WASN'T! The marchers were peaceful, but the intimidation attempted by the Seal Team Six Cosplay commandos is a very real and disgusting form of violence. Then the event itself was hijacked by a speaker who, though black, claimed to be a gun carrying black trump supporter who more or less threatened the marchers who had gathered to remain peaceful. Wow, who invited her? If there'd actually been more than a couple black people, I'm sure they'd have shushed her for her absurd right-wing, out-of-place rhetoric. The myth that protesters are violent is one that spits in the face of America's tradition, from its founding, of gathering, sometimes in anger, to make the case of liberty. Shame on you Columbia County gun nuts: the second amendment doesn't trump the first one. And asking people who do not support the cause to speak is just poor planning.

Photos / A Passion for Dancing: Hard work, but fun, rewarding

Get familiar with Tarter Farm and Ranch