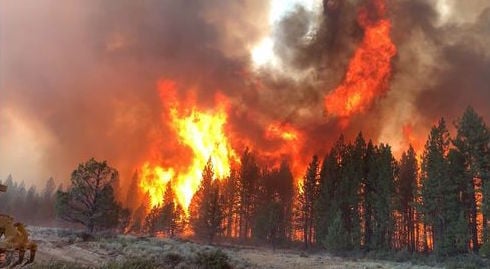 The Bootleg fire in Southern Oregon has spread across over 300,000 acres. 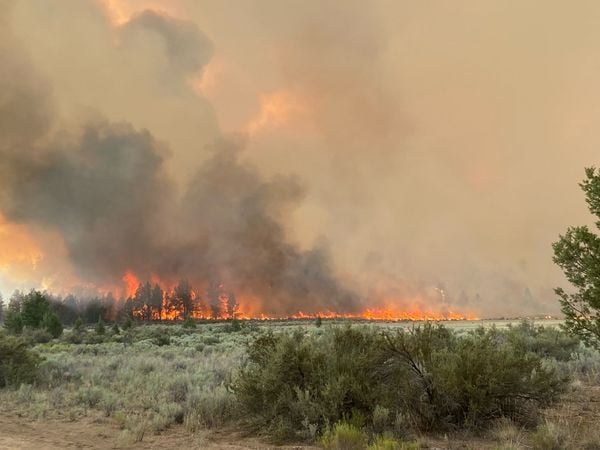 A task force of Columbia County firefighters has been sent to this wildfire near Sisters. 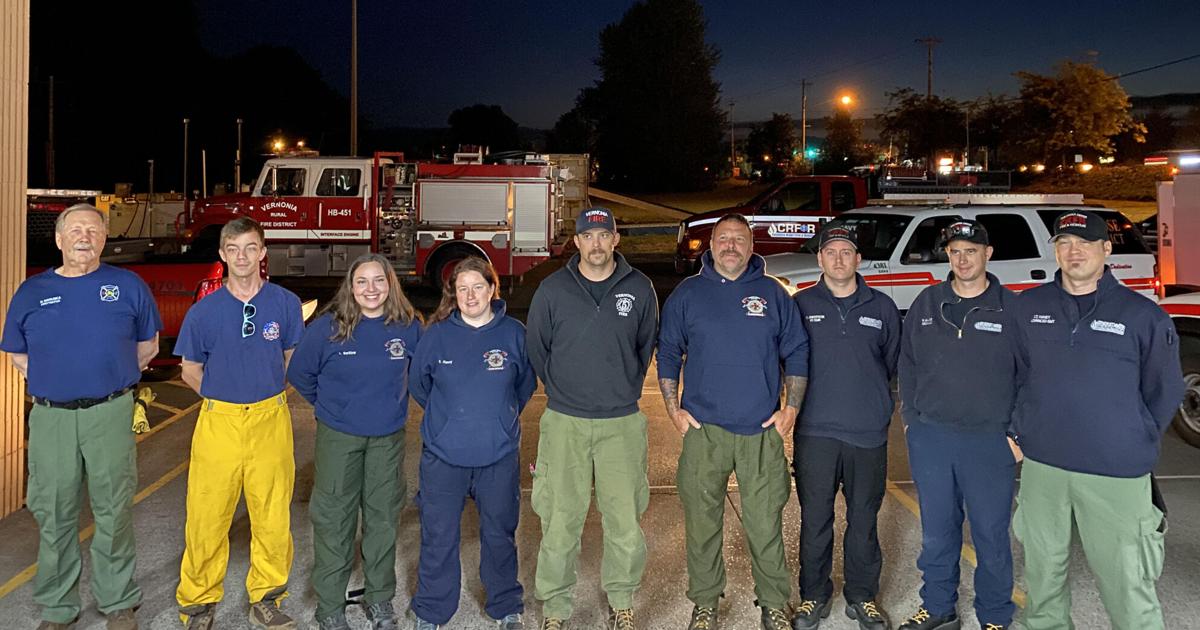 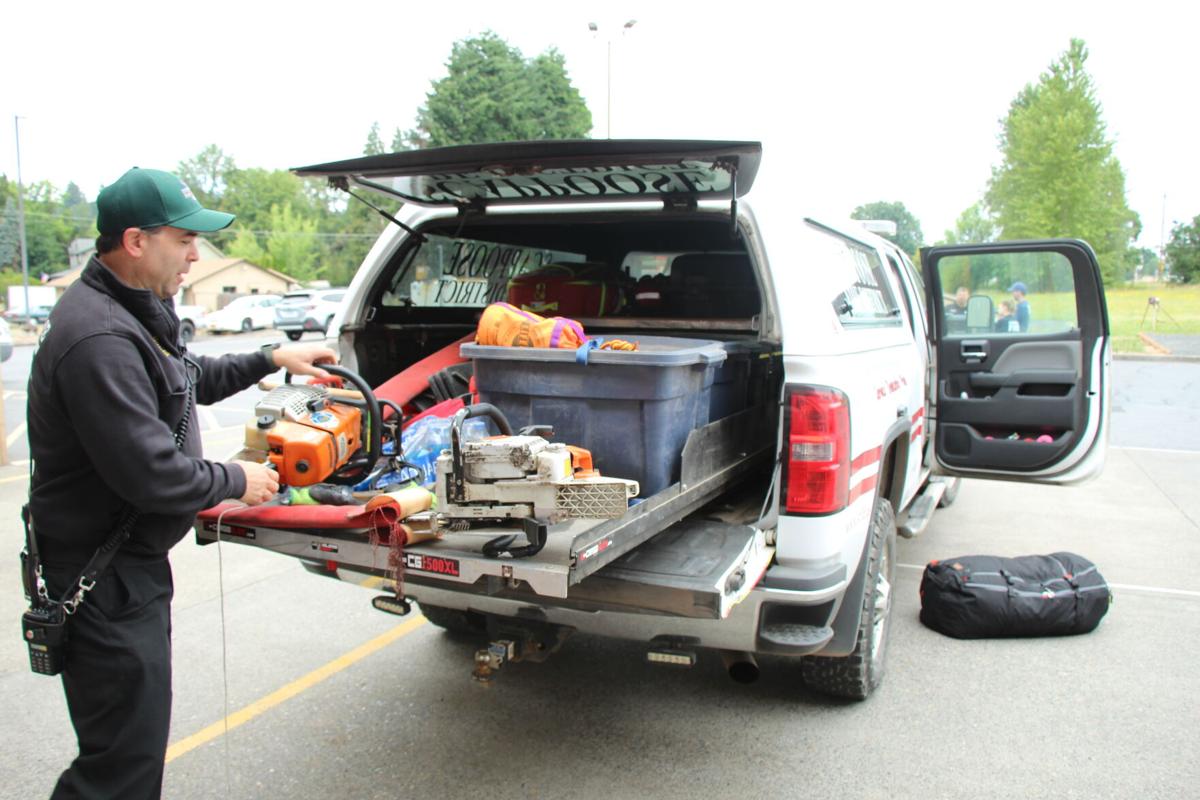 Scappoose Rural Fire Protection District (SRFPD) Chief Jeff Pricher loads gear as he prepares to be dispatched to Redmond for incident command duties as the wildfire season began. He has since returned to Scappoose. 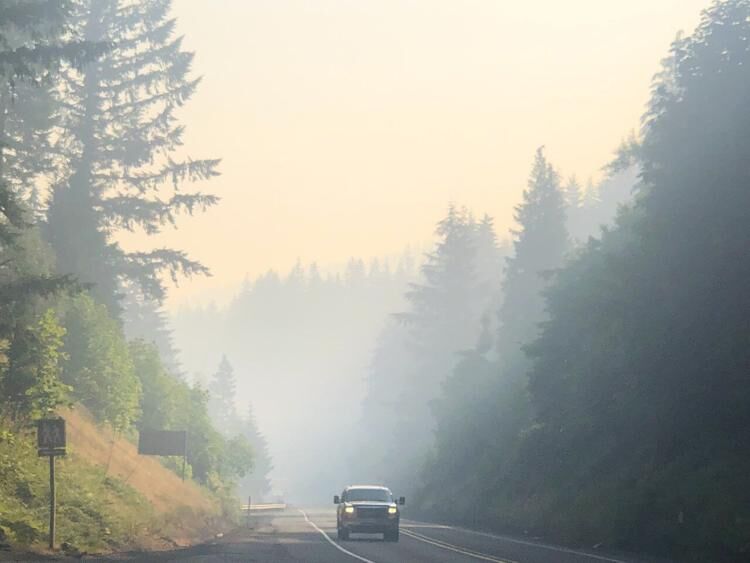 The fire is estimated at about 70 acres.

Columbia County Fire Defense Board Chief confirms that the Columbia County Wildfire Task Force is back home after assisting suppression efforts at the Elbow Creek Fire.

The task force was made up of firefighters from the Scappoose Rural Fire Protection District, Columbia River Fire & Rescue, Mist Fire, and Vernonia Fire.

They all arrived back in Columbia County Saturday, July 24.

The task force returned from the Elbow Fire and while there, supported burn out operations with hot shot crews and "did an amazing job with holding the line throughout the day" according to a release from Columbia River Fire & Rescue.

The Columbia County firefighters were originally dispatched July 13 to the Grandview Fire near Sisters, than moved to the Elbow Creek Fire in Eastern Oregon.

The Bootleg Fire in Southern Oregon is now approximately 53% contained at just over 400,000 acres. Fire officials said as of Monday, July 26, 2,257 personnel were working to fully contain that blaze, which investigators said was caused by lightning.

As wildfires erupt across the state, local firefighters are being called to distant communities to help save lives and protect structures. Early Tuesday morning, July 13, a task force made up of firefighters from around Columbia County left to assist with the firefighting effort at the Grandview Fire near Sisters.

As The Grandview Fire is nearing full containment, the Columbia County firefighters and task force have been demobilized and sent to the 16,402 acre Elbow Creek fire near Troy, Oregon.

"Our crews are actively engaged in fire suppression efforts and have been working in an incredibly austere environment," Scappoose Ruarl Fire Protection District Chief Jeff Pricher said. "Reports from the field include chasing lots of spot fires."

Pricher said because the fire grew so quickly and limited resources were available at the time, crews have had to be self-sufficient until a fire camp can be established.

"They are working with limited to no cell service and are about as far away as you can get in northeastern Oregon," he said. "Thankfully, all the fire agencies in the Columbia County Fire Defense Board have worked together over the years to build out a trailer that has a cash of food for three days, and other necessities for having a home base in the wilderness."

What the team of firefighters bring back to Columbia County is invaluable experiences that can strengthen local fire responses, according to Pricher.

“We don’t have large scale incidents,” he said. “So, these responses help us plan for bigger disasters.”

While there is a strain by having the county fire agencies away from the area, the experience gained is invaluable when it comes to establishing plans, working challenging logistical obstacles, and managing hundreds to thousands of resources with limited communications while in an austere environment, according to Pricher.

The fire response teams, including firefighters from Columbia County, set up small cities that have to cover making maps for responders, written plans and objectives for the operations staff to follow, resource tracking and ordering, medical support for the responders, maintenance for the hundreds of vehicles and aircraft, facility build outs, 24-hour food operations to support three meals a day, communication specialists that build out the complex communication repeater systems, fire behavior analysts, weather forecasters, logistics folks that maintain generators and loose firefighting equipment and distribute fuel to all of the responders and aviation specialists to manage the rotor wing, fixed wing and unmanned aircraft involved in the effort.

“There are an incredible number of moving parts to these large incidents and those experiences, translate back to our county when we have our own large fires, critical incidents, or weather emergencies,” Pricher said. “Obtaining these experiences, provides us with the requisite knowledge skills and abilities to effectively work with mutual aid partners, county, state, and other federal responders.”

Pricher said the local firefighters know there are dangers going into such wildfire suppression assignments.

Pricher said communications, human nature and the fire, which includes weather, topography and fuel, are the three factors that increase the firefighting challenges.

According to Pricher, the key is effective planning and knowing what’s coming, so decisions are made in split seconds.

Pricher says there is a key difference in fighting wildland fires as opposed to responding to structure fires.

“At a structure fire, you go really hard, with a wildland fire it takes a while for you to organize and bring the team together. Its more of an endurance effort that involves local, state and federal helpers, so it is a huge collaboration.”

Pricher describes Oregon’s wildfire season as significant and said wildfire conditions in Columbia County are also at dangerous levels. Dry fuels, continued hot weather and no rain in sight has heightened the local wildfire danger. Pricher and fire officials across the county continue to urge public safety and awareness.

Pricher said the Columbia County fire agencies want to thank all the families of the career and volunteer firefighters for allowing their loved ones to participate in protecting the state during the wildfire season.

"Notable mention also needs to be made to our local businesses and any business that is allowing their employees who are volunteer firefighters to respond," Pricher said. "A significant compliment of our county task force is all volunteer."

Pricher said he anticipates that the local crews could return on or around July 26 or 27.

On Wednesday morning, July 14, the Oregon Department of Forestry reported a new wildfire in the Tillamook State Forest.

Firefighters from six Oregon Department of Forestry (ODF) offices are engaged this morning along with crews from South Fork and industrial forest landowners providing water tender support on a wildfire burning in the Tillamook State Forest about 22 miles northwest of Forest Grove. The fire is estimated at about 70 acres.

The Game Hog Creek Fire is burning in timber and slash north of Highway 6. Drift Creek and Idiot Creek forest roads are closed as is the Fear and Loaming mountain bike trail due to fire activity in the area. Elk Creek campground is currently open but smoke is likely in the area. To avoid exposure to possible smoke, campers may choose not to camp there.

The fire was originally sparked on July 3 within the Tillamook State Forest. Cause of the fire is still under investigation. The fire was soon contained at 6 acres with control lines completely encircling it. Due to the steep, inaccessible terrain, the fire was being patrolled and monitored. The patrol reported at 5:30 p.m. Tuesday that the fire was quiet. Rising evening winds apparently caused the fire to jump the control lines.

ODF responded to reports of fire spread in the area sometime after 7 p.m. Tuesday with ground crews engaged on the fire overnight.

More than 100 personnel are engaged on the fire, including firefighters and support personnel from ODF offices in Tillamook, Columbia City, Astoria, North Cascades, Forest Grove and the West Oregon District in Polk County as well as Hampton Lumber and Stimson Lumber Company.

The Tillamook fire was reported to have grown to 135 acres over the past weekend. Additional helicopters have been brought in to help contain the blaze.