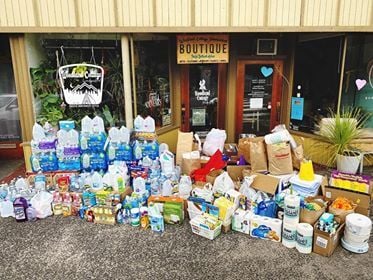 The donations were lined up in front of Woodland Cottage Handpicked Boutique at 241 S. 1st St. in St. Helens before they were sent to the Warm Springs Indian Reservation in Central Oregon. 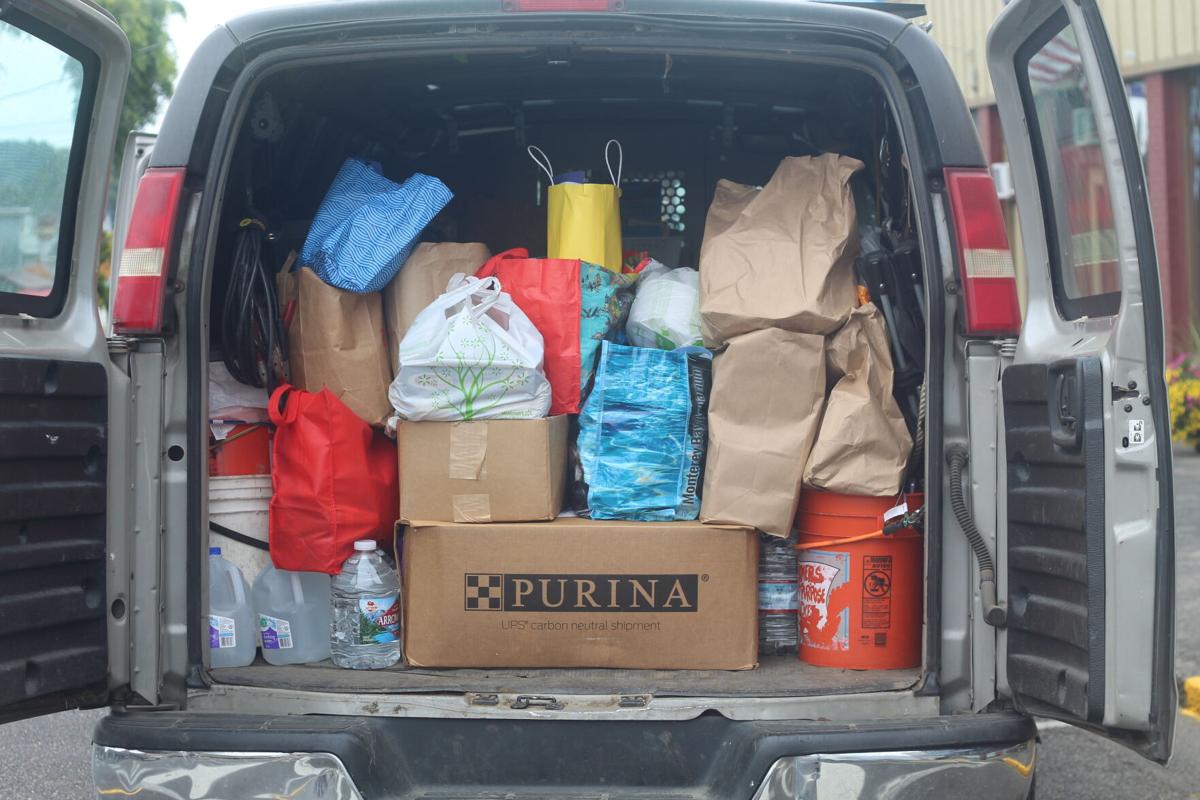 Donations from Columbia County residents filled a van that will be delivered to Warm Springs Reservation in Central Oregon.

The donations were lined up in front of Woodland Cottage Handpicked Boutique at 241 S. 1st St. in St. Helens before they were sent to the Warm Springs Indian Reservation in Central Oregon.

Donations from Columbia County residents filled a van that will be delivered to Warm Springs Reservation in Central Oregon.

After hearing about a need for water and other items at the Warm Springs Reservation in Central Oregon, Woodland Cottage Handpicked Boutique in the Old Town District of St. Helens and local political action committee Moving Forward Columbia County (MFCC) teamed up to collect donations from community members to send to residents of the reservation.

Paine had posted that she was looking for a local business to host a site for a donation drive for the Warm Springs reservation. Paine had not been the originator of the drive. Paine was only one part of a complicated network that had spun out of four women who had decided to start donating to the reservation. The ringleader for that group is Mariah Hilson.

Hilson runs a farm in Colton, and said it was an article about the reservation that broke her heart and inspired her to take action.

“I’m not a very emotional person, but it brought tears to my eyes and a lump in my throat. So it I felt like I had to do something,” Hilson said.

She and three other women got together and worked out what to do. At first, they thought it was clean water that the reservation needed most. But then one of Hilson’s friends decided to call the reservation, and after calling and being forwarded to several different people, she eventually got in contact with Danny Martinez, who leads the relief center at the reservation, according to Hilson.

“After speaking with him, we found that there was more need other than water,” Hilson said.

According to Hilson, the first team got together and decided what to do on July 9.

The team of friends set to work collecting all sorts of items, from hand sanitizer to clothing to paper towels, to other hygiene items, according to Hilson. The four friends tried to get the word out about what they were trying to accomplish, and posted on social media, and called and texted friends to see if anyone could offer any additional items.

Two days later, July 11, was when they sent a convoy of vehicles full of donations to the site. While they had originally planned to take two cars to the reservation, they ended up taking seven cars because of so many donations, Hilson said.

When Allison and Cavanaugh saw Paine’s post, they jumped into action, primarily using social media to get the word out. Knowing that Woodland Cottage’s Facebook reach was around 2,600 people, Allison chose that site to post for donations, as well as on the 4C’s Facebook page.

Allison also decided to use Woodland Cottage’s store as the staging area for donation drop-off and organization.

But two trash cans weren’t enough. They received so many donations that they ended up filling a 220-square-foot storage space in Allison’s store.

“You couldn’t walk through here,” Allison said.” It was completely filled.”

Allison and Cavanaugh said they couldn’t put a monetary value on everything, but they knew it was a lot.

In order to handle all of the donations, ladies from MFCC worked throughout the day to accept donations and getting them put away, Allison said.

Allison said she was really grateful for the community in showing up.

“Anytime we put anything out, they come together like that,” Allison said, snapping her fingers. “They set their differences aside. And they know the humanity is the bigger cause.”

Woodland Cottage is planned to be the site of donation drop-offs in the future, according to Allison and Cavanaugh. The two said they would check in with Martinez on what specific items the reservation will need each week. There might be a theme for what they need in the future, Cavanaugh said.

Donations will continue for the foreseeable future, according to Hilson, until Martinez decides he doesn’t need them anymore. The team has been looking at other ways to help in the longer term as well, not just with running donations to them, but what exactly that help will be remains to be seen.

According to Hilson, Martinez has sounded very grateful every time they’ve spoken. The reservation has received a lot of donations, and not from major corporations, which is what Hilson said she thought when she visited and saw the reservation’s relief center. According to Martinez, the donations are primarily coming from individuals in Portland.

Either way, Hilson said she plans to keep collecting donations and delivering them.

“We were thinking a once a month drop, but if things continue to go the way that they’re going right now, we’ll be there quite a bit more frequently than that,” Hilson said.

Anyone wishing to donate can contact Woodland Cottage Handpicked Boutique, at 503-953-9994, or see the store’s Facebook page.

If you know of someone, an agency or business, or a group, that is making a positive difference in our community and would like to see them featured in Who We Are, email details to jruark@countrymedia.net.