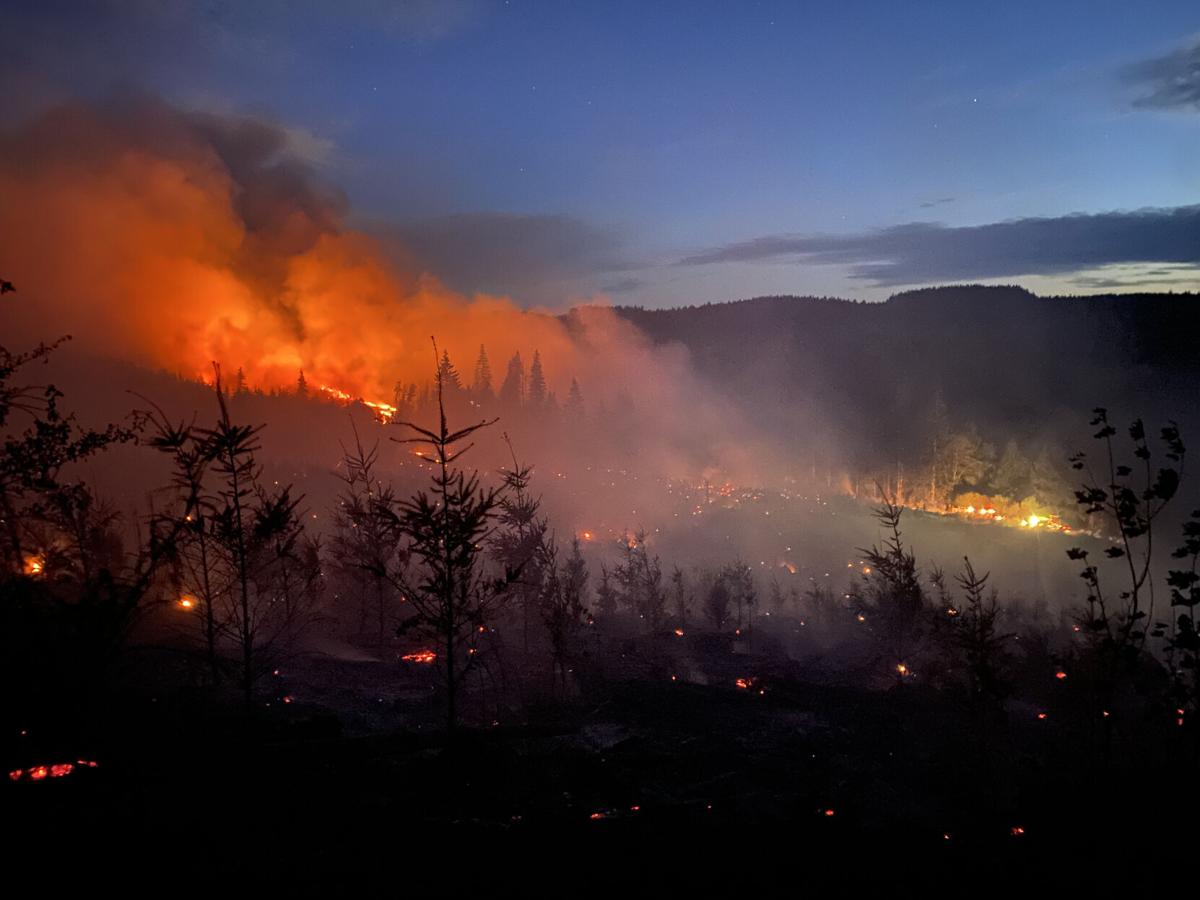 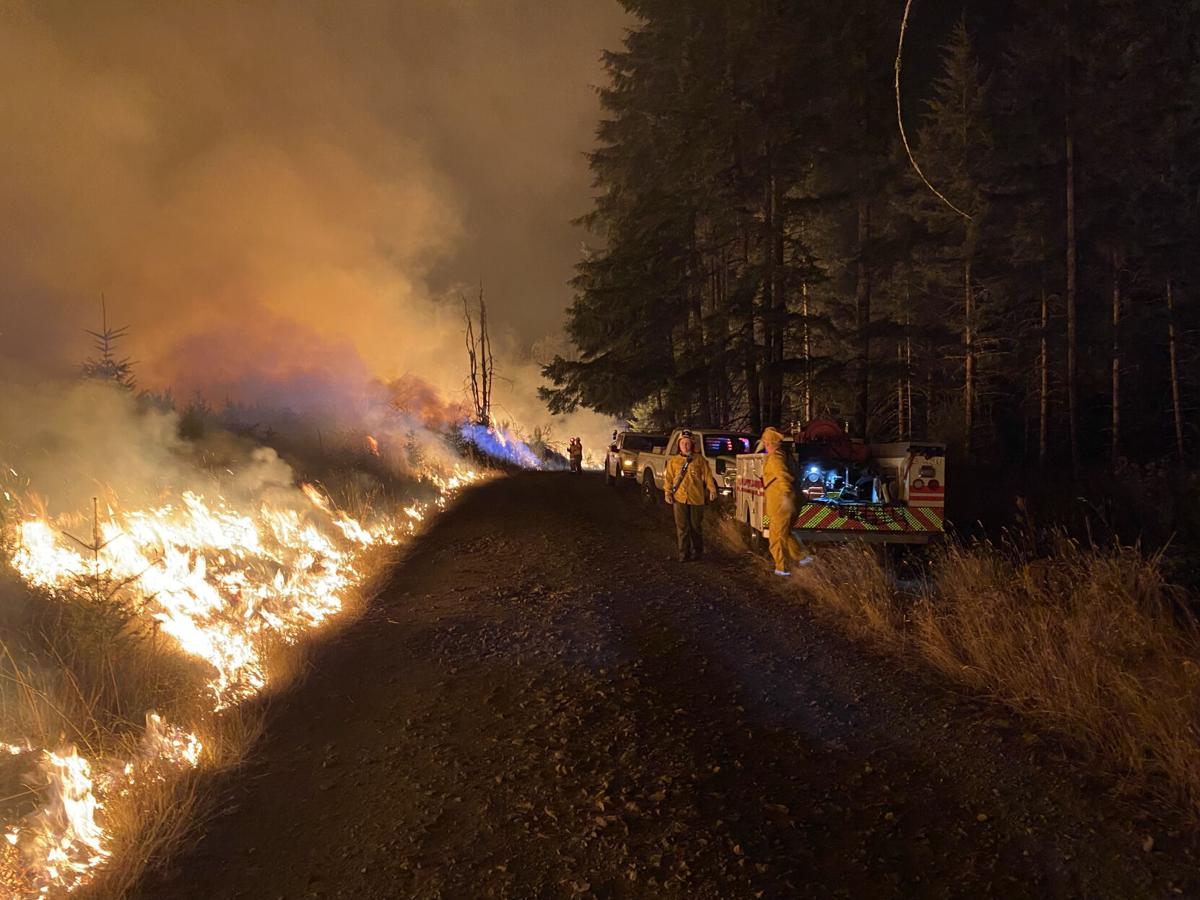 Fire crews carefully navigate as smoke and flames rage along this road. 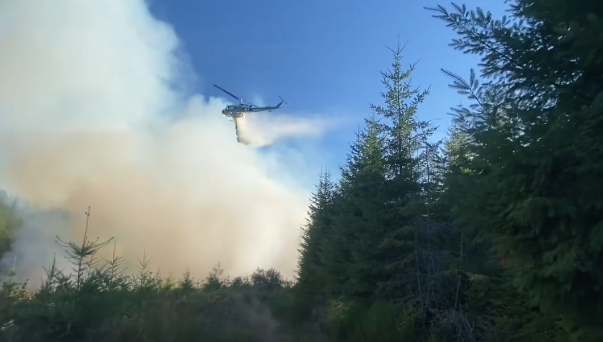 A helicopter is used in the battle against the wildfire near Scappoose.

The cause of a 50 acre wildfire near Scappoose was still undetermined as of Sunday afternoon.

Fire crews worked throughout the night Saturday and by Sunday afternoon, the Alder Creek Fire was 70% contained at 50 acres with minimal unplanned growth expected in the next 24 hours.

Total containment is expected in the next several operational cycles unless a significant weather event disrupts current plans, according to Scappoose Fire officials.

Scappoose Fire District crews has been assisted in the suppression efforts by Columbia River Fire & Rescue and the Oregon Department of Forestry (ODF).

Dayshift resources included a helicopter, engines and four 10-person South Fork hand crews. Dayshift efforts on the fire were focused on securing the South end of the blaze,

No structures were threatened.

"We wish to offer our sincerest of thanks to the dispatchers at Columbia County 911 who assisted us early on in the fire," Scappoose fire officials said in a release.

"Most importantly, special mention is needed for our dedicated volunteers of the Scappoose Fire District," the release states. "Without their support and the support of their families, protection of our community would be significantly more difficult."

The Alder Creek wildfire was at approximately 50 acres as of late last night, pushing east toward heavily timbered Bureau of Land Management property.

Fire officials said the fire was 75% contained due to favorable weather conditions for fire suppression operations. A helicopter is on standby at Scappoose airport and will deploy in the morning, if necessary.

No structures are currently threatened, according to Scappoose Fire.

The cause of the fire is under investigation.

Fire crews were at the scene of a wildfire near Scappoose Saturday evening..

At 2:50 p.m., Scappoose Fire District. the Oregon Department of Forestry (ODF), Vernonia Fire District (VFD), and Columbia River Fire & Rescue (CRFR) responded to the wildfire that was approximately 30-plus acres.

The fire is located in a forested area 4 miles northwest of Alder Creek Road in the Bunker Hill area within ODF jurisdiction. No homes were threatened.

A helicopter from the Washington Department of Natural Resources was on scene assisting with fire control at the head of the fire. An additional helicopter has been dispatched from Redmond, to assist with fire suppression.

The fire is 15% contained as of 7p.m. Saturday and burning toward the southeast.

The cause of the wildfire had not been determined at the time of this post.

Do you believe it is time to build a hospital in Columbia County?

Most Viewed / Out of Stock: Supply chain disruptions

Most Viewed / Out of Stock: Supply chain disruptions