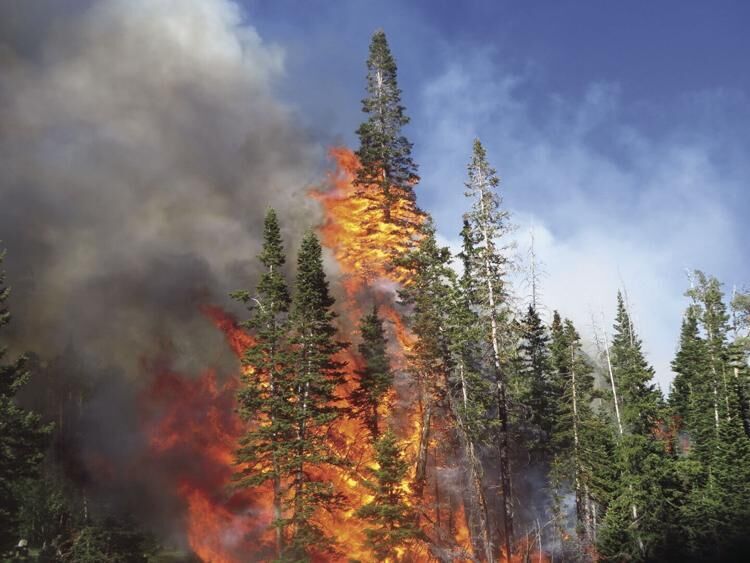 Oregon fire officials are urging everyone to be aware of the increasing wildfire danger. 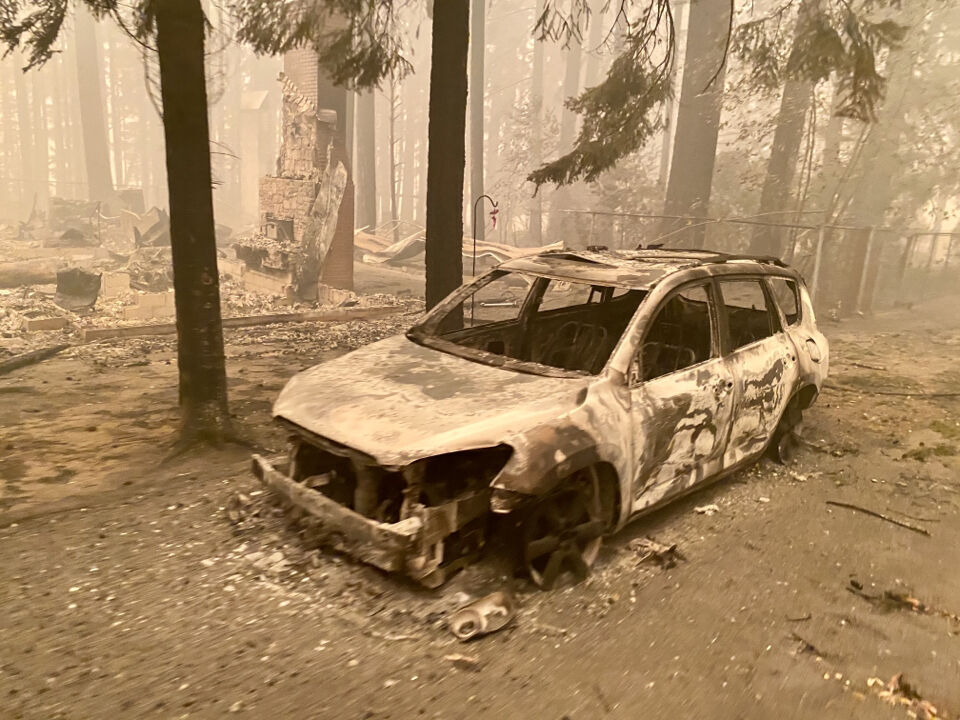 The 2020 Oregon wildfires swept though entire communities leaving a wide path of devastation and destruction. 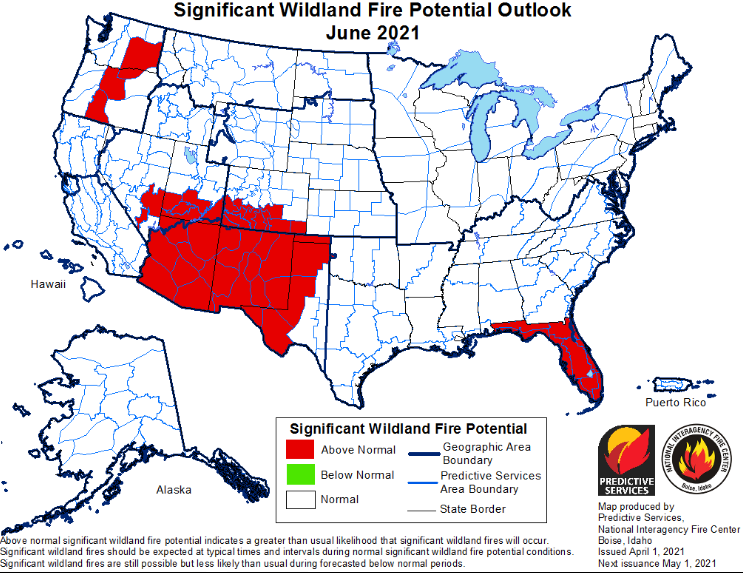 This illustration shows the significant wildfire potential for June. 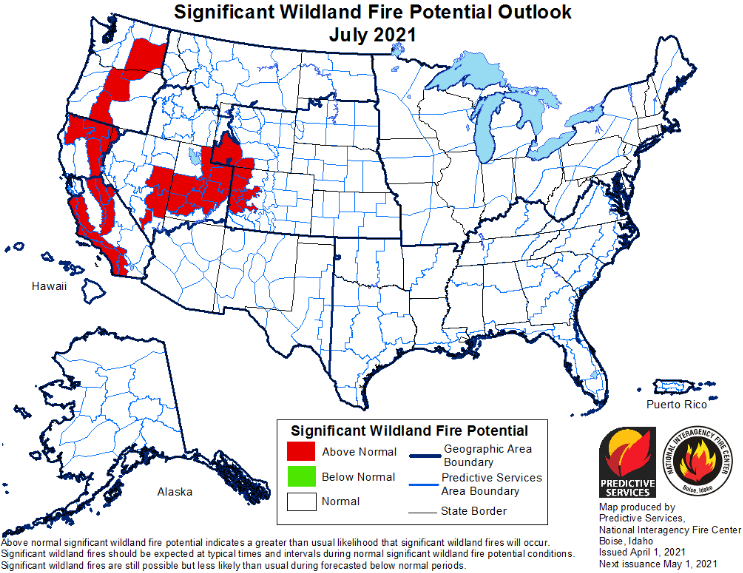 This illustration shows the significant wildfire potential for July. 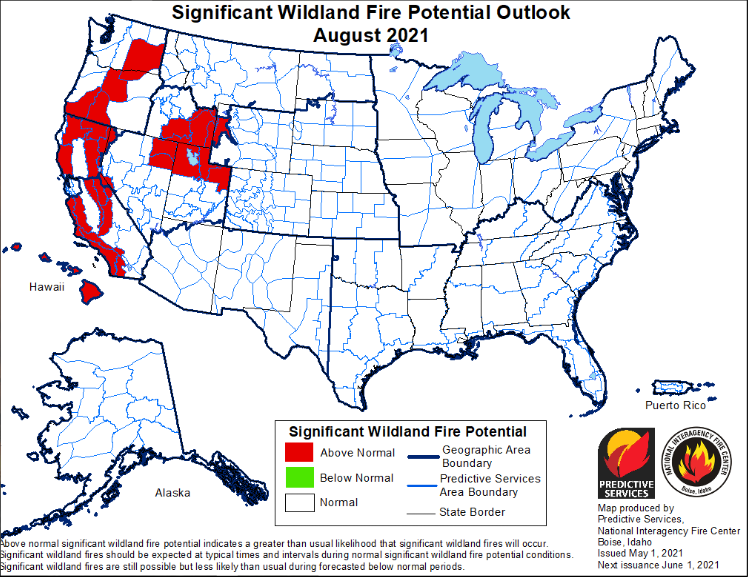 This illustration shows the significant wildfire potential for August. 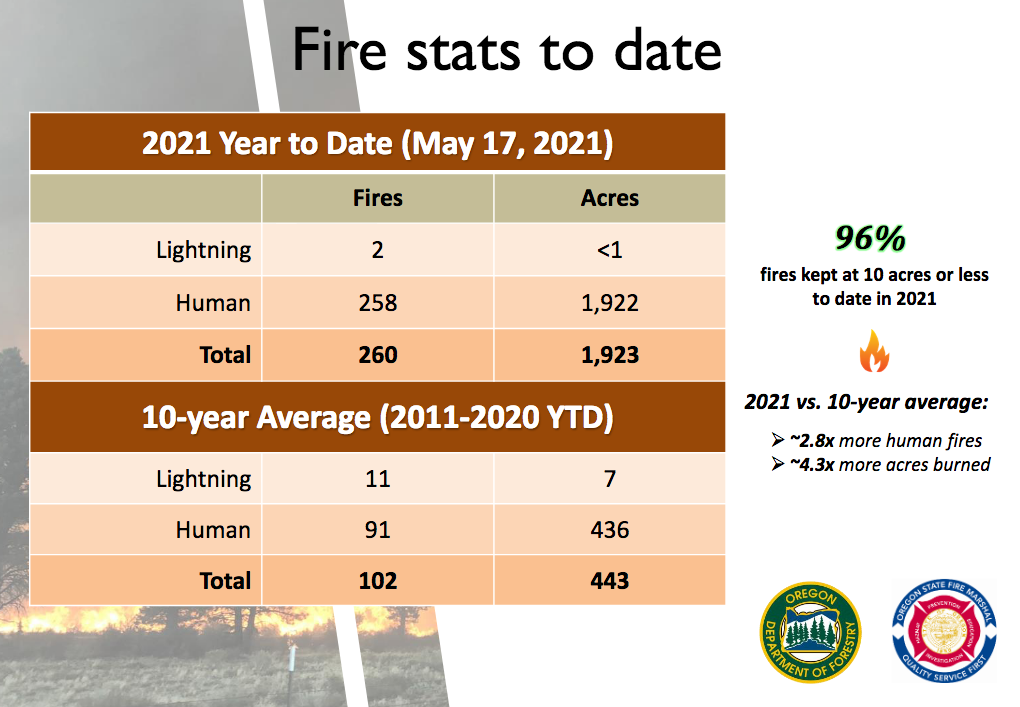 This graph shows the fires to date in Oregon.

Since that time, the region has received some rainfall, but officials said it is not enough to lesson the increasing heat and drought that are key factors in the wildfire danger.

Fire officials are urging everyone to follow burn bans that will be in place Monday night, June 21, and to be aware of the fire danger.

A open debris burn ban will take effect at 11 p.m. June 21 within the Columbia River Fire &a…

Oregon is moving into a more dangerous and more intense wildfire season complicated by the state’s continued and deepening drought.

That is the overall assessment presented during a media briefing Thursday afternoon, June 3, conducted by Gov. Kate Brown’s office that included a number of state agency representatives.

“We are seeing longer duration and more complex fires,” Oregon State Fire Marshal Mariana Ruiz-Temple said. “We are looking at fires in a different way this year and there is significant concern of the fires we are seeing and where these fires are.”

Much of Oregon is facing abnormal drought conditions, according to Oregon Department of Forestry Fire Protection Chief Doug Grafe.

“Continued drought conditions persist and weather conditions are complicating the drought,” Grafe said. “Over the next three months temperatures are projected to be above normal and precipitation below normal through August and September.”

The official May-June-July forecast from the National Oceanic and Atmospheric Administration (NOAA) Climate Prediction Center shows higher chances of above-normal temperatures and below-normal precipitation for most of the region, which indicates that drought conditions are likely to get worse in the coming months.

The Significant Wildland Fire Potential Outlook shows higher chances of wildfire potential east of the Cascade crest throughout Oregon and in southwest Washington by June and July, according to NOAA.

According to the latest water outlook report issued by the U.S. Department of Agriculture’s (USDA) Natural Resources Conservation Service, nearly all reservoirs in the Klamath Basin are storing less than 50% capacity, and basin streamflows are expected to run between 8% to 49% through the summer.

In addition to the worsening impacts already being felt across the region, there is also the potential for dry conditions to impact drinking water, endangered species and wetland ecosystems, and fire danger, the NOAA report states.

Grafe said Oregon has ready experienced 300 fires this year which is well above normal.

Comparing the devastating wildfires that spread across the state last year, Grafe said the 2020 event was an aliment of natural forces that was unprecedented.

“Any weather event that will be close to that, such as dry lightning, will put us at significant risk,” he said.

The state has also worked with Oregon counties providing mass communication systems to alert the public of emergencies, such as wildfires, and to help coordinate survival efforts. But when questioned by a reporter about the apparent ineffectiveness of such a mass communication system in Jackson County, Phelps acknowledged that no system is perfect.

“These systems rely on humans and mechanical systems,” he said. “Every county needs to take that responsibility seriously and make sure there staff are trained for such systems.”

Phelps said every Oregoninan can take steps now to reduce the wildfire risks.

“I am asking every Oregonian to plan being a disaster survivor,” he said. “Disasters are inevitable but there are things that we can do to reduce our individual risks, our families risks and the risks to our communities.”

Using a graphic during the Zoom media briefing, Phelps outlined a plan to be ready.

Both Grafe and Ruiz-Temple agreed that the Oregon Public Utility Commission’s (PUC) new temporary rules allowing utilities to switch off power during wildfires to protect the public and property are important.

“I see that (the PUC rules) as a good movement,” Ruiz-Temple said. “Senate Bill 762 speaks specially to the PUC response and how they engage. There needs to be a process.”

Ruiz-Temple said the state has made investments in responses, risk reductions and resilience, including implementing the governor’s wildfire council’s recommendations and 2021 legislation.