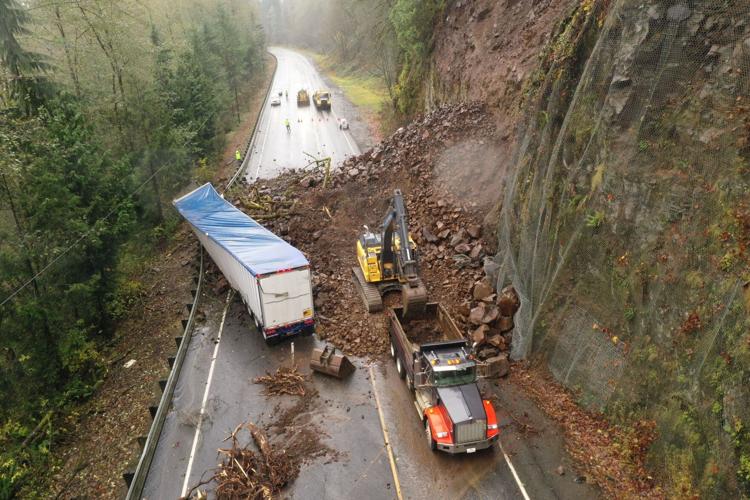 This photo show the extent of the slide along Highway 30. 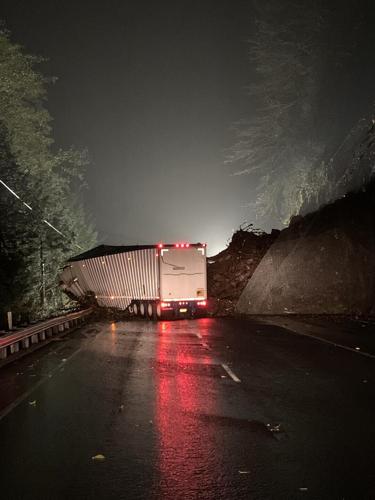 The landslide between Astoria and Clatskanie on Highway 30. The driver of the truck was not injured. 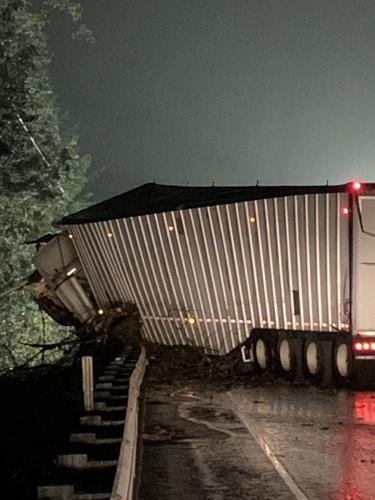 It appears that the force of the slide pushed this large semi truck into the highway guardrail. 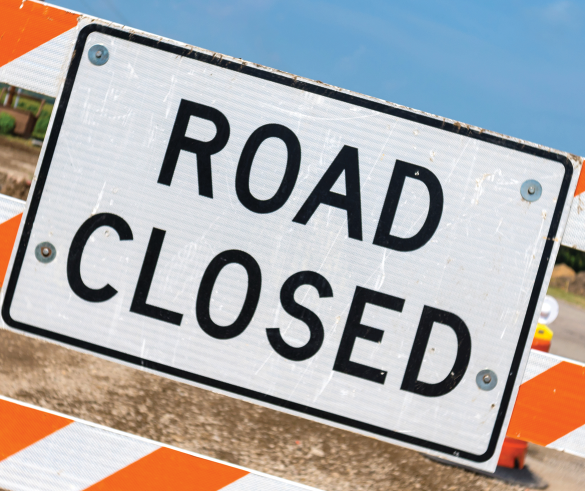 The landslide is along Highway 30 between Astoria and Clatskanie.

Highway 30 will remain closed Thursday, Dec. 1, and possibly longer while crews clear landslide debris and make temporary repairs to the highway, according to the Oregon Department of Transportation (ODOT).

"We don't have an estimate of when we can reopen the highway, so please use an alternate route if you travel between the Portland area and the north coast the next few days," ODOT states in a release. "US Highway 26 is the best alternative, and OR Highway 47 and 202 are options for passenger vehicles. Don't use less developed roads you may find on your GPS device because these routes are dangerous, especially in wintry weather."

ODOT advises that anywhere you travel in Oregon, prepare for a longer drive at safer speeds in these weather conditions - less daylight, low visibility, and possible standing water, snow and ice.

Oregon State Police have provided The Chronicle with the following new details concerning the semi truck at the landslide.

Oregon State Police was notified of a rockslide and vehicle crash on Highway 30 near milepost 74. Preliminary investigation revealed an eastbound commercial motor vehicle (CMV) attempted to drive around the initial slide area / debris field when the remaining debris continued to fall.

The debris covered all lanes of Highway 30 and collided with the passing CMV. The driver self-extricated. No injuries were reported.

The CMV was left at the scene within the debris. ODOT is actively working to clear the highway of debris.

New photos from the scene show the extent of the highway 30 landslide.

Highway 30 is closed at mile point 74, about halfway between Astoria and Clatskanie, due to a landslide that occurred Tuesday night.

The Oregon Department of Transportation (ODOT) reports the highway will be closed at least Wednesday, Nov. 30, and possibly longer so that crews can clear the debris and make sure the highway is safe to reopen.

There is no estimate on when the highway can reopen.

ODOT is asking drivers to use an alternate route such as US Highway 26 or OR Highway 47 and 202. Please don't use off-highway routes in your GPS service - those roads can be very dangerous in these weather conditions.

Heavy rainfall is a suspected cause of Tuesday night’s landslide. At least 10 truckloads of rock and mud slid onto both lanes of the highway about 10:30 p.m. Material still is sliding down from the hillside.

This section of US 30 crosses an area where landslides have long been part of the geology, often triggered by heavy rainfall. So this part of the road has long had landslide warning signs.

To reopen the highway, we need to clear the large amount of material and make sure the highway is safe for travelers.

Emergency cleanup will begin Wednesday. After that, our safety engineers and geologist will make sure the highway is safe to reopen. We have no estimated time for that, but it is likely to be no sooner than Thursday.

Remember to check Tripcheck.com for updates on road and weather conditions in Oregon.

Which team will win the 2023 Super Bowl?

Honored: Tyler Tolles selected as Elks Teen of the Month

To Your Health: World Cancer Day

Honored: Tyler Tolles selected as Elks Teen of the Month