Elected officials in County County have sent Gov. Kate Brown a letter expressing their concerns about what they said are the pending closures of businesses impacted by the state's pandemic health and safety county classifications.

On Friday, April 30, 15 countries, including Columbia County, were classified by state health officials are Extreme High risk due to increasing COVID-19 cases and hospitalizations. The risk level severely restricts public gatherings and business operations in an effort to slow the spread of the virus.

The county letter outlines concerns that elected officials said they are hearing from the public and business operators.

"Our neighbors share our frustrations with us," the letter states. "Our business owners come to us with questions about how they will be able to operate under continued restrictions."

The elected officials letter states that many citizens and businesses initially understood the COVID-19 health crisis as it spread across the state last year.

"They were willing to do what they could to help minimize risks to their families and customers," the letter reads. "Their struggles were evident in the emptiness we saw in our commercial corridors for months on end."

The letter said the community job creators have patiently followed the health and safety guidelines and eager to phase-in their operations over time and they invested in their businesses when they were finally allowed to re-open. Staff was brought back and new employees hired to fill vacancies.

"We would ask that instead of emphasizing shutdowns that the state focus its priorities on ensuring the widespread distribution of available vaccines, especially to the rural parts of Oregon," the letter states.

The elected officials letter follows a letter sent last week by the Oregon Restaurant and Lodging Association and also signed the Columbia County Board of Commissioners and 78 other elected officials, asking Gov. Brown to reconsider the risk classifications.

The new letter states that the issue goes beyond the hospitality industry. The elected officials said they are hearing from owners and employees of various athletic clubs, bowling alleys, movie theaters and other entertainment venues, as well as organizers of annual events that bring communities together and who are unable to do any kind of planning.

Aside from forging a spirit of local unity, those events also bring us together as people from neighboring communities and generate much-needed economic activity, according to the letter.

"We respectfully request that you consider the needs of our communities, merchants, and residents when implementing policies that could devastate their ability to provide goods and services to their customers, as well as livelihoods for their families and employees. We hear directly from them, and are increasingly familiar with the growing desperation, fear and uncertainty that they are facing to this ongoing crisis," the letter states.

The Chronicle has requested a statement from Gov Brown specific to the Columbia County elected officials letter sent to her office April 30.

See the attached letter the Governor's office sent to us, which was presented in response to the counties concerns. 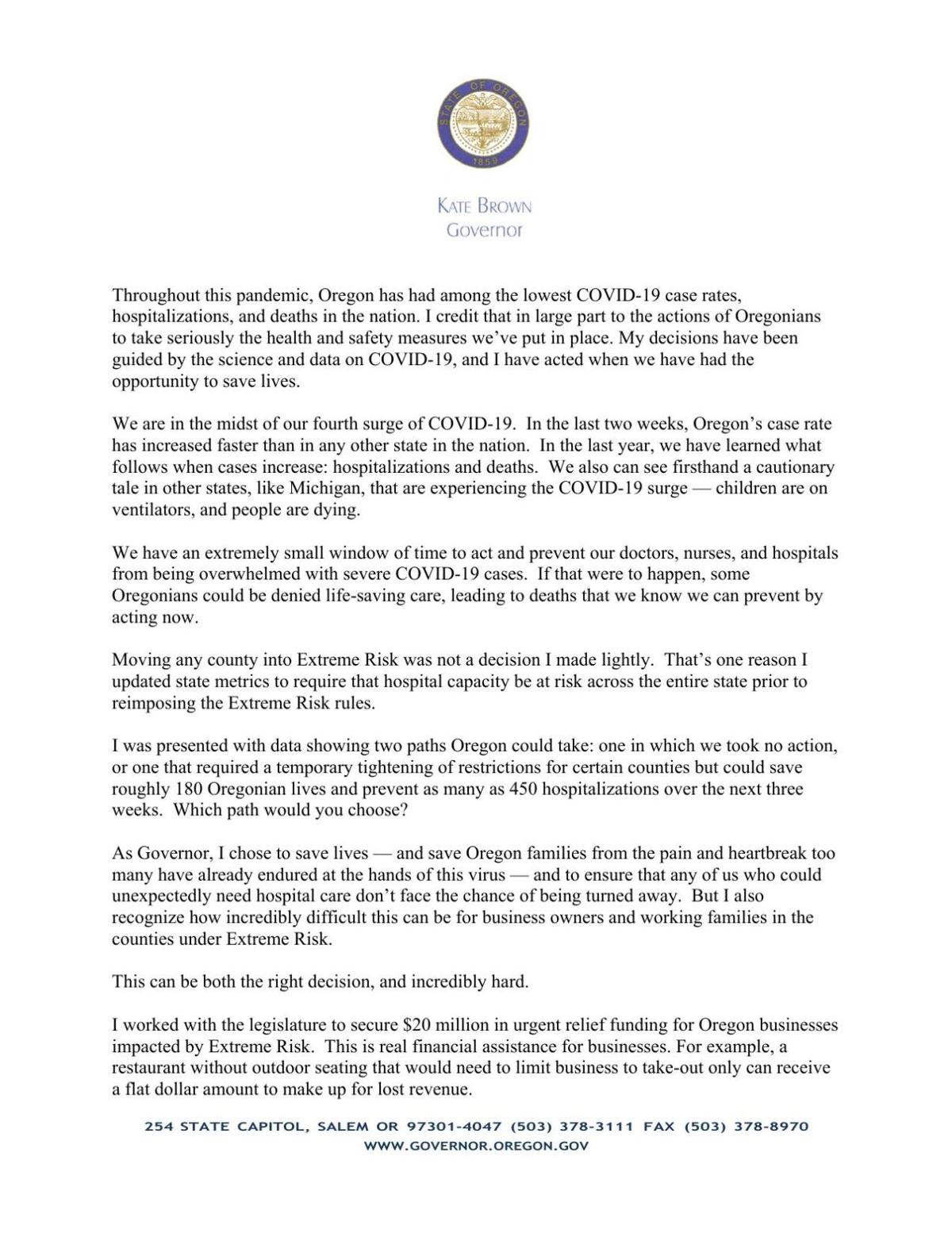 Gov. Brown said during a media briefing April 30 that she is moving forward with the risk classifications.

"I chose to save lives," Brown said.

Oregon Governor Kate Brown is standing firm in her decision to move 15 counties, including C…