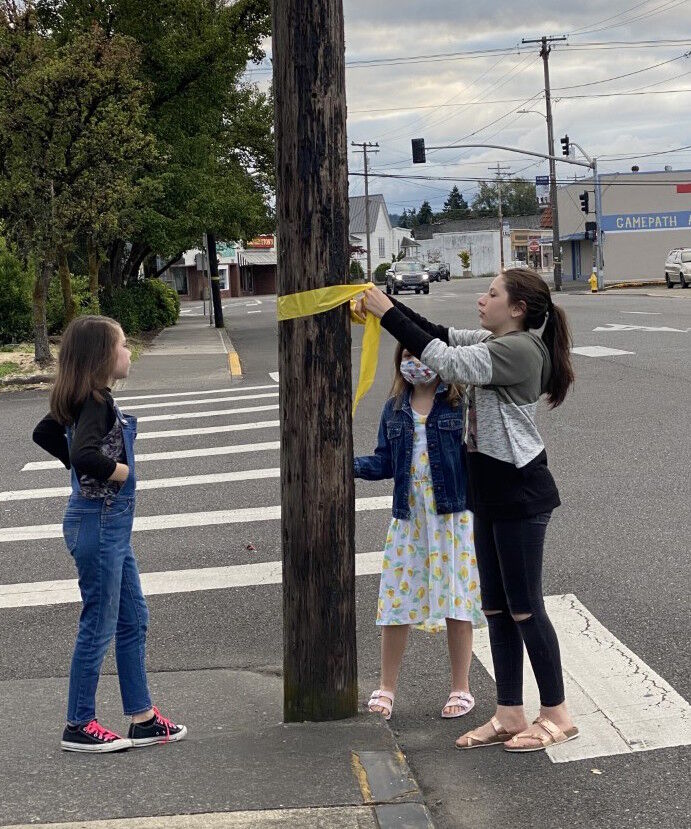 Three members of the American Heritage Girls ties a yellow ribbon around a PUD utility pole in St. Helens. The ribbon is one of hundreds now decorating the city.

Three members of the American Heritage Girls ties a yellow ribbon around a PUD utility pole in St. Helens. The ribbon is one of hundreds now decorating the city.

St. Helens residents have seen something new crop up in town over the past week: yellow ribbons adorning trees and utility poles all over the main streets of the city.

The tying of the yellow ribbons is part of the Hometown Heroes program, and is meant to support the troops, according to Hometown Heroes board member and American Heritage Girls service project coordinator Vivian Rupe, who led the ribbon-tying.

Hometown Heroes is a program that honors local residents currently deployed, and is spearheaded by the Columbia County Sheriff’s Office (CCSO).

“[Ribbon-tying has] been used for hundreds of years and over time, it just ended up developing the meaning of supporting the troops, regardless of whether you have somebody in the military who’s deployed or whether you just simply support them,” Rupe said.

The approximately 3,000 ribbons were tied by about 20 people right before the Fourth of July, Rupe said. It was mostly the local American Heritage Girls troop and friends and family members of those deployed who tied the ribbons, Rupe said.

The yellow ribbons are there to remind people of “what it means to be deployed and why we are able to enjoy all the freedoms that we have because of being deployed and them being away from families and sacrifices that they make,” Rupe said.

At first, Rupe approached the city of St. Helens for permission to start the ribbon-tying. According to Rupe, city representatives said they were concerned about the ribbons falling off the trees and littering city property. Additionally, Rupe said, there were not enough trees for the ribbons to be spread out evenly. That’s where the Columbia River PUD came in.

According to Rupe, she approached the PUD for permission to place the ribbons on the more evenly-spaced light posts and utility poles.

“I reached out to them and they were more than happy to provide approval for us to put them on their posts,” Rupe said.

The PUD provided Rupe with a map of where all the utility poles are within St. Helens. Starting shortly before July 4, the team of 20 people then set to work trying to cover all of the main streets in St. Helens, including St. Helens Street, Gable Road, Old Portland Road and Columbia Boulevard. Rupe broke the areas down by section, putting families with relatives currently serving in charge of certain areas. Those families are in charge of periodically patrolling the area where they have placed ribbons and picking up ribbons that have fallen or retiring damaged ribbons.

The entire project involved about 2,000 feet of ribbon, Rupe said. The ribbons will be kept up until Sept. 1.

Rupe was also able to locate a local craftsman who was able to make yellow ribbons to be hung near the courthouse on the Fourth of July.

“That was also pretty important because we weren’t able to celebrate the Fourth of July as normal, so we felt that having the yellow ribbons would also add to celebrating all of the freedoms that we have,” Rupe said.

The same project was done in October of last year, when the St. Helens based Bravo Company 741 Brigade Engineer Battalion of Oregon Army National Guard was deployed. At that time, Rupe said she had also had to secure permission from the city and PUD to tie up yellow ribbons, and she made the same parties aware at that time that she would be asking permission again soon to do the same project months later.

Rupe said she sometimes gets questions about what the ribbons are for, and she tells them they are for supporting the troops.

To find out more about the Hometown Heroes projects, visit https://www.facebook.com/HometownHeroesColumbiaCounty.

Who We Are: Local fire crew to the rescue

The Chronicle is always looking for positive stories about people helping others and making a difference in our community.

The approximately 3,000 ribbons were tied by about 20 people right before the Fourth of July,