A $312,000 improvement project is underway at Campbell Park in St. Helens.

The work began this week at the site just off McMichael Avenue.

In the following conversation, the City of St. Helens Communication Director Crystal King outlines the project.

The Chronicle: What specific work is being done and why?

Crystal King: We are replacing the four tennis courts and the basketball court with three new sport courts which will be able to accommodate basketball, tennis, pickleball, volleyball and other net sports. The project will also including a viewing area with seating between the courts, expand the parking area, improve stormwater facilities, and improve ADA access.

A conceptual plan has been attached. 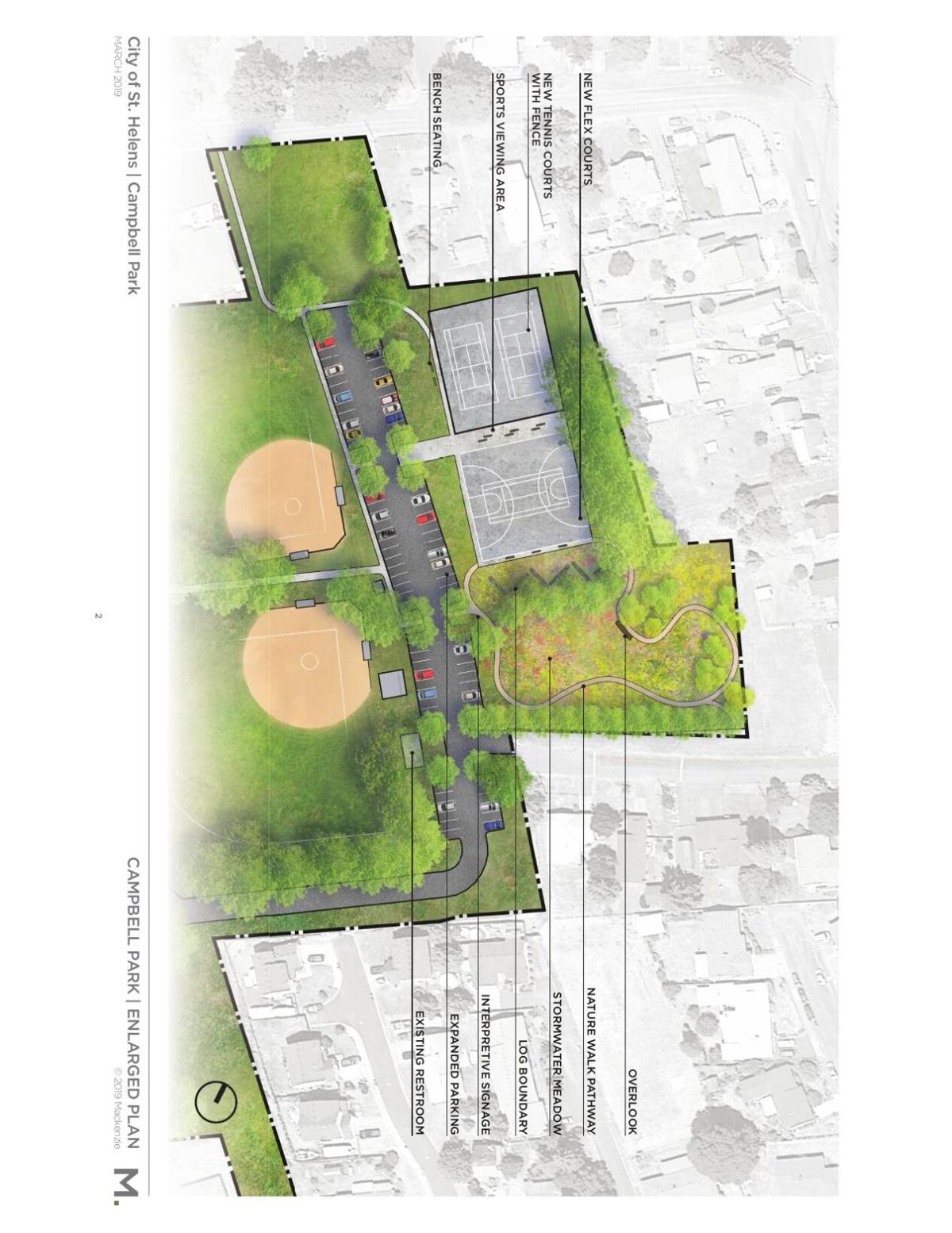 The work is being done because the tennis courts have severely degraded since their original construction, and the basketball court regularly floods due to the topography of the area. The stormwater improvements will ensure the new courts will redirect water off of the new courts into a new stormwater retention area.

The Chronicle: How much will this work cost and how is it being funded?

King: This grant is being funded in part with an Oregon Parks and Recreation Grant from the Local Government Grant Program. The grant is for $187,024, and the total project is estimated to cost $312,099. This includes in-kind labor for our St. Helens Public Works crew to do demolition of the existing courts, grading, site preparation, and stormwater improvements. The City is also interested in partnering with volunteer groups or non-profits who are interested in donating native plants or supplying volunteer labor for the new stormwater retention area to keep costs low.

The Chronicle: What will be the benefits to the surrounding neighborhood and the city with this work?

King: In addition to accommodating new sports with the sport court installation, parking in this area is limited, especially during events. Stormwater piping will allow the expansion of the parking lot by 15 feet, adding approximately 25 new spaces, including two ADA spaces. Sport court surface technology has improved substantially since the original basketball and tennis courts were constructed. The new courts are made of modular, interlocking tiles that are grippy and absorb shock, which reduced stress on knees, ankles, and the back.

The Chronicle: Are there any other city parks scheduled for improvements and if so, where and what improvements, cost and how funded?

King: Yes, we have several other city parks that are scheduled for improvements. Here are summaries of those projects:

Columbia View Park Waterfront Boardwalk (Phase One) and Amphitheater Stage Replacement: The City’s Planning and Engineering Departments will begin design and engineering work for this partially grant-funded project. This project will replace the Columbia View Park Amphitheater stage to accommodate larger gatherings and improve sound quality and install a waterfront boardwalk within the park which will eventually connect to a larger trail system along the riverfront.

The design work is anticipated to begin in the Fall 2020 through Spring 2021 due to grant funding delays at the state and federal levels. The City has a grant pending approval for $500,000 through Oregon Parks and Recreation Land and Water Conservation Fund. We also have another $500,000 grant pending review from Oregon Parks and Recreation’s Local Government Grant Program.

Dalton Lake Nature Preserve Improvements: Public Works will install kiosks, a bench, and bike rack that the Friends of Dalton Lake Nature Preserve are donating. One of kiosks will go at the south end of the Nature Park and another at the main entrance at the north end. Interpretive signs will eventually be installed along the trails to identify native plants and bird species. Public works plans on building a small gravel parking pad off the edge of the trail for more convenient access.

Follow these projects here online and in the Wednesday print editions of The Chronicle.

The City of St. Helens was recently notified it was awarded a state grant for Campbell Park …