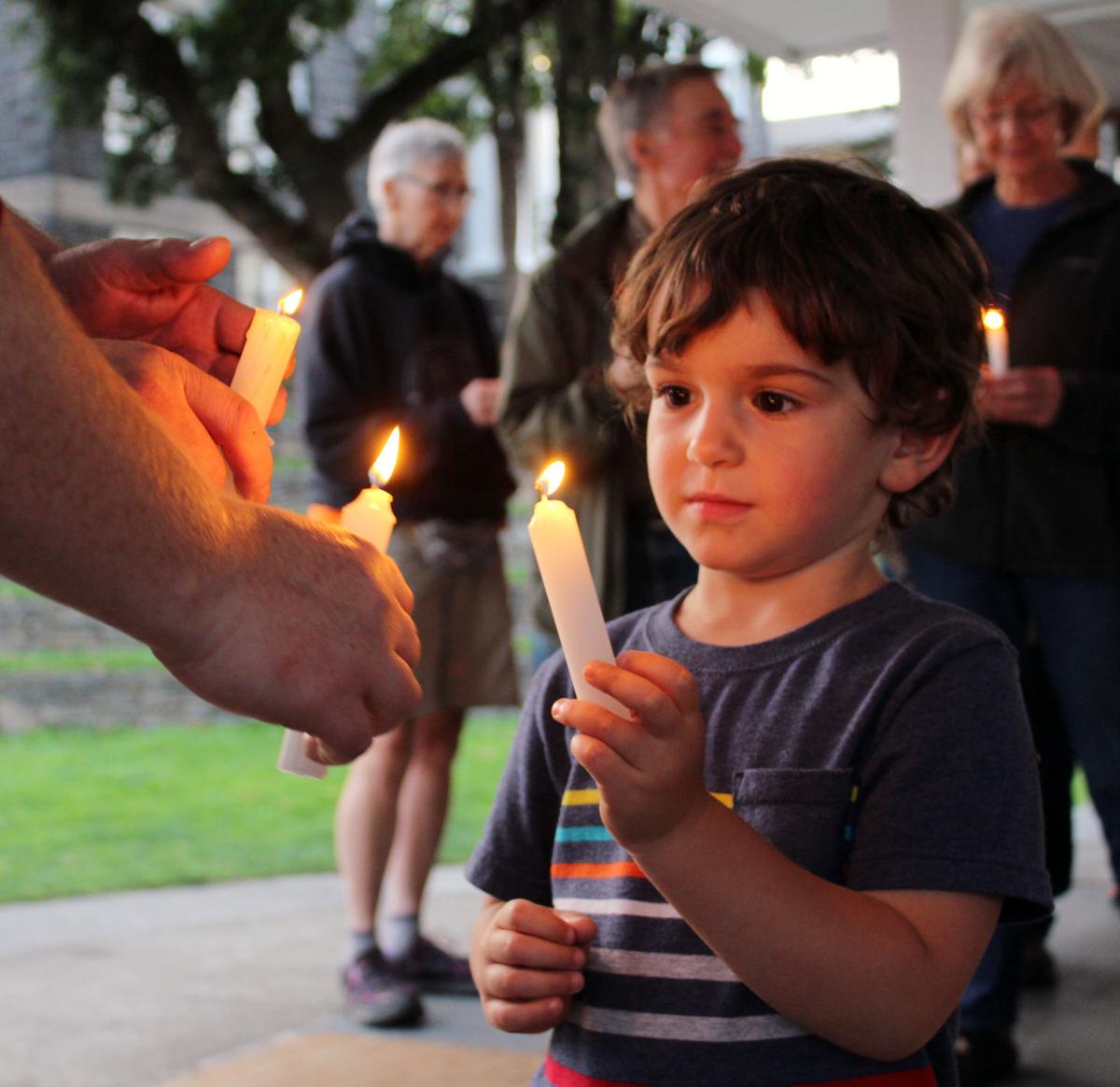 This little boy’s mother said, with tears in her eyes, that she attended to protest the treatment of children in American detention centers at the border. 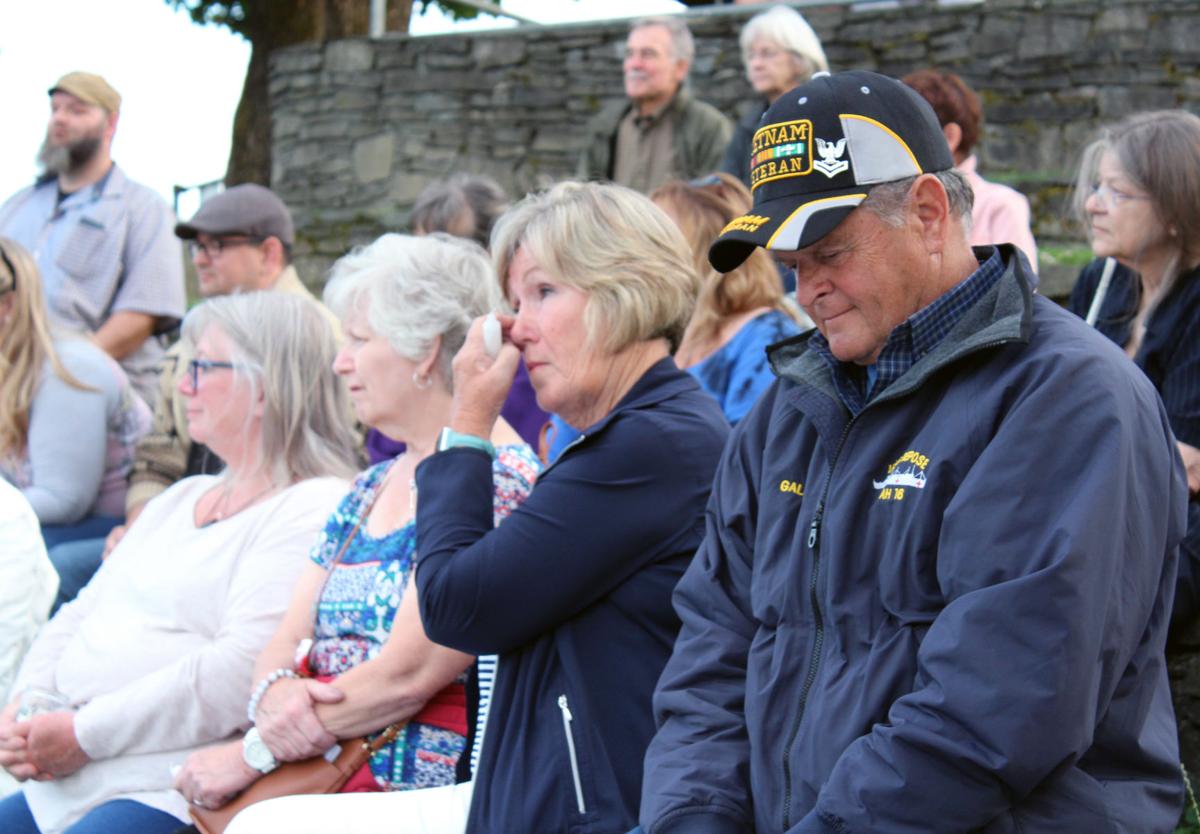 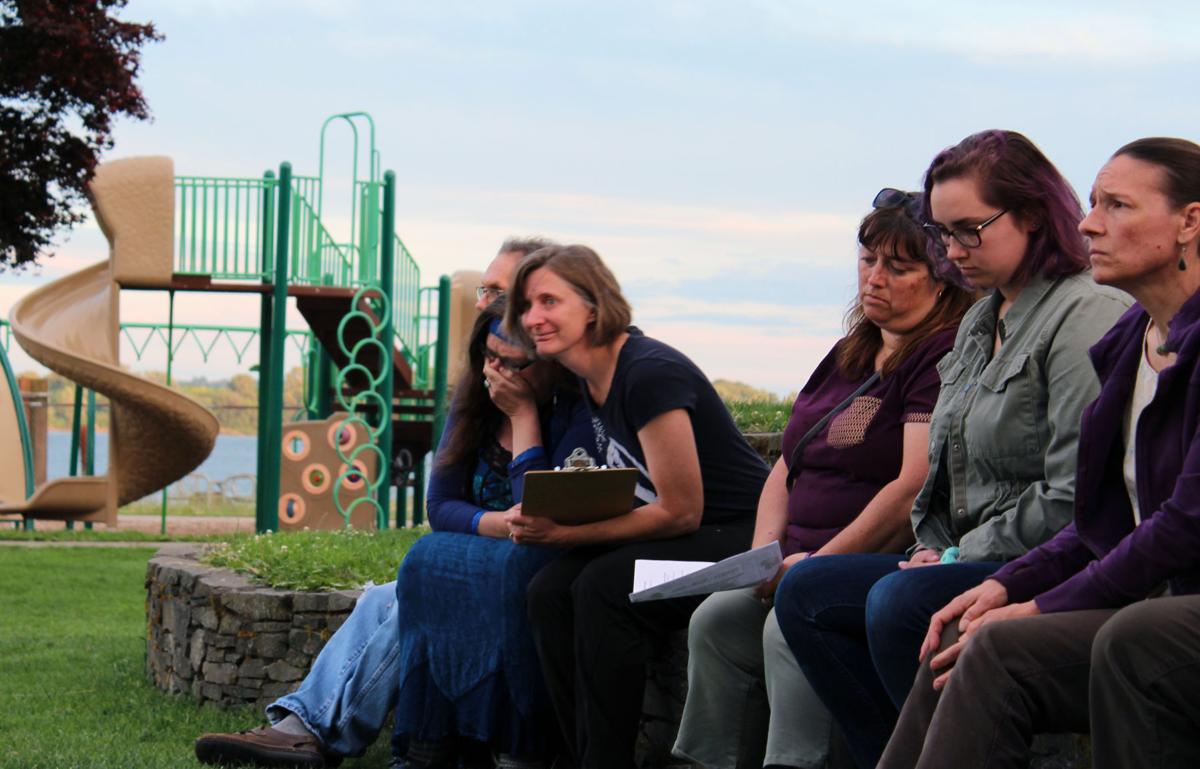 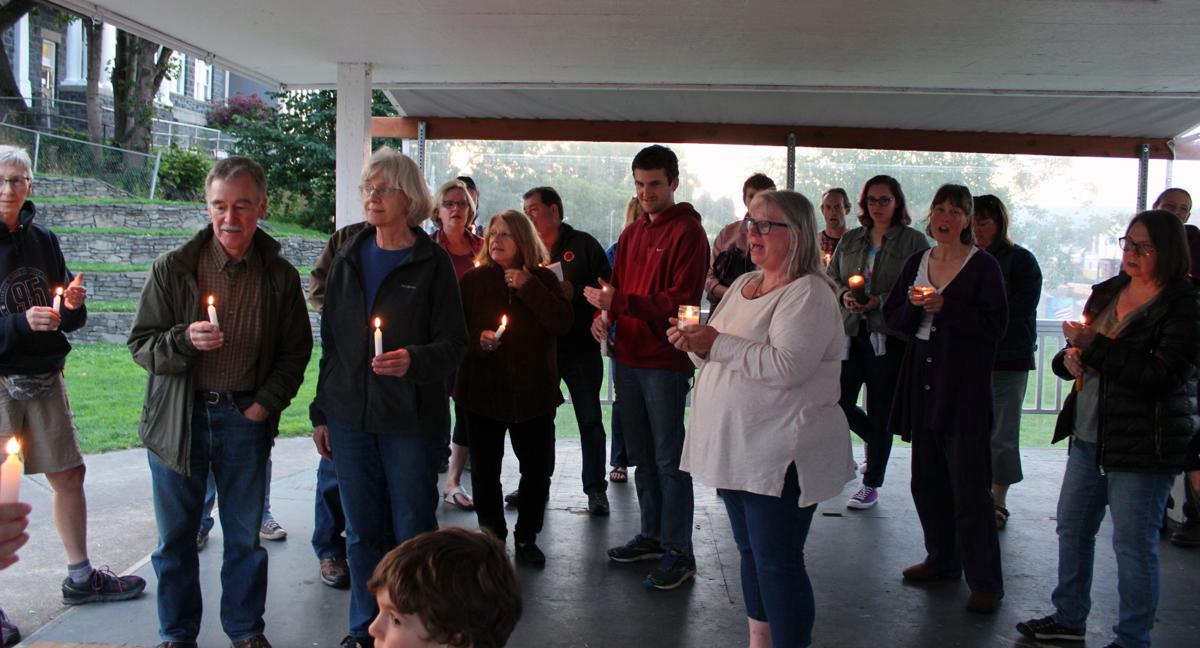 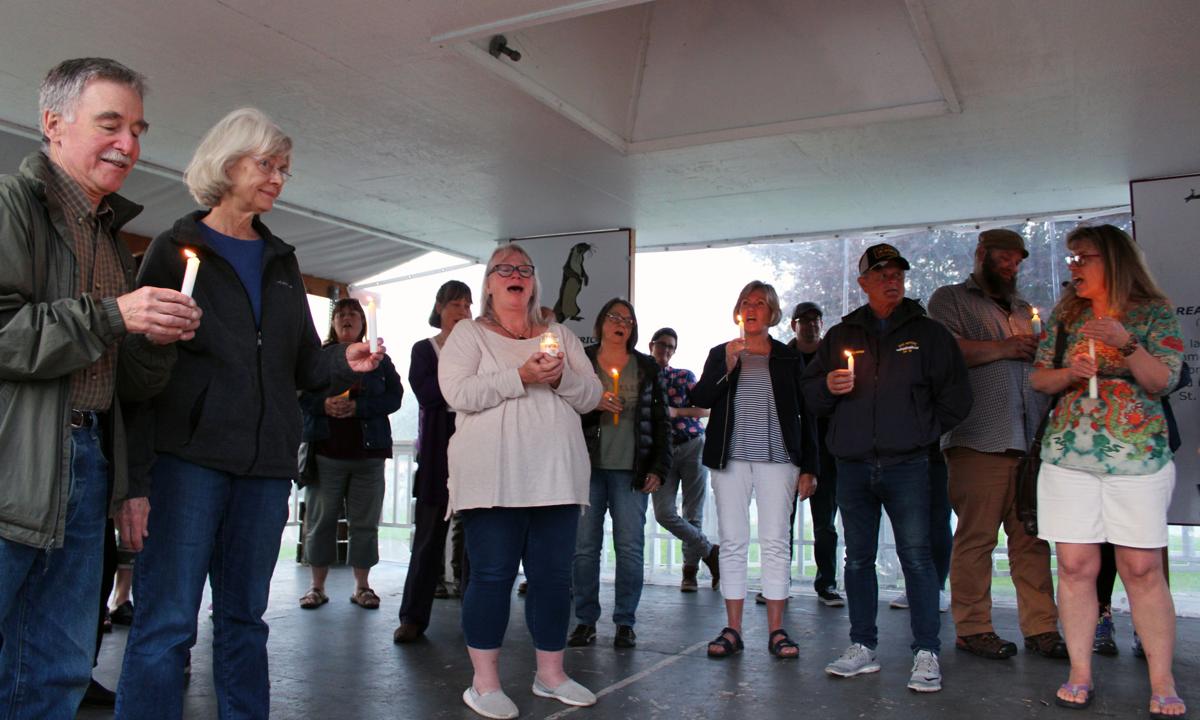 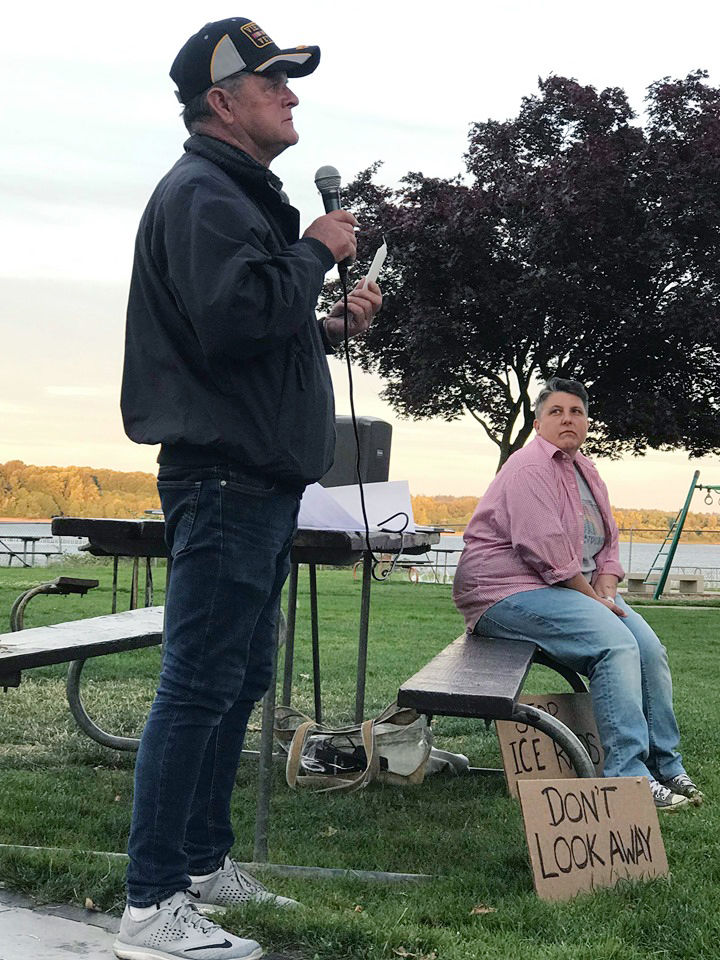 This little boy’s mother said, with tears in her eyes, that she attended to protest the treatment of children in American detention centers at the border.

On Friday evening, July 12, dozens gathered down at Columbia View Park in St. Helens for the “Lights for Liberty” vigil to raise awareness about the conditions in America’s immigrant detention facilities.

“Lights for Liberty: A Nationwide Vigil to End Human Detention Camps” scheduled simultaneous events on five continents and in nearly 600 locations worldwide, according to the group’s website.

“Lights for Liberty began with a series of tweets I drafted, in which I shared the horrors that one of our co-founders, attorney Toby Gialluca, had seen inside the camps,” Lights for Liberty co-founder, Elizabeth Cronise McLaughlin said. “Since then, we’ve watched thousands of ordinary people come together to organize events and fight back worldwide.”

One of those ordinary people was Columbia County local Lori Baker, who took it upon herself to organize the vigil for St. Helens. She said she’d seen there was a vigil planned for Portland and had planned to attend but decided there needed to be one held closer to home.

“I just called the city and got a permit for the park and was like, ‘I guess this is happening now,’” Baker said. “I didn’t really think about it. I just hoped that I wasn’t the only one here that wanted to object to what’s happening.”

Baker said local April Helton, who helped her lead the event at Columbia View Park, was also instrumental in bringing the vigil together.

“We’re talking about what’s happening at the southern border,” Baker said to those gathered at the beginning of the vigil. “We’re all here for the same reason. You learn the facts, and this week I’ve been trying to do that, and I realize I’m so confused about what’s going on at the border.”

Baker encouraged the attendants to learn the facts, support and donate to organizations working to fight for migrant rights, to speak out and educate people around them.

“Protest. Call your government representatives to demand change and support migrant families in your community,” Baker said, before opening the vigil with a prayer.

The prayer was followed by a read statement from Senator Jeff Merkley (D), detailing what he’d witnessed when he’d visited the border in June of 2018.

“Thank you for staying vocal and visible in your opposition to the administration’s policy of using children as political pawns,” Merkley’s statement said. “As frustrating and difficult as it is to stay engaged, this is not the time to turn away.”

“Six days after graduation, I went to Vietnam at 18, and realized – ya know, on that first hospital ship I went over – the horrors of war and watching these children be abused and their families … I thought that’s what I was fighting against,” Gallagher said.

Cassee, who can be seen speaking at the event in a short video on The Chronicle’s Facebook page, said she felt compelled to join the protest because, “if it’s not them, it’s going to be me.”

“We have to protect human life,” Cassee said. “We have a big statue with her arms open wide, and how can we say no? We invite them in to be so mean and cruel? No.”

After personal, first-hand accounts from children currently inside the detention centers were read, Gallagher, his wife, and many others took their turn at the microphone to speak against America’s current treatment of incoming immigrants.

“I’ve seen all the horrors of the war – what happens to children. I never believed it would happen here. Your voice does count. Use it. We all have these candles. It’s not wax. It’s hope when you light it, and unconditional love,” Gallagher said. “You need to use that, not just for our children or their children, but because it’s the right thing to do. We all know what the right thing is to do. Take that step. Stand up. Stand against it.”

“We don’t have to say, ‘Make America Great Again’ because America is great. It always has been great,” Gallagher said to a chorus of approving applause. “And the reason it’s great is because of people like you. So, stand up. Be accounted for.”

Following the speeches, Helton expressed that she’d wanted to lead the group in a round of “Dona nobis pacem” – a Latin text often used in various church masses, the words translate to “grant us peace.” However, Helton admitted she wasn’t very musically inclined and asked if there was anyone in attendance who was. Almost immediately, Margaret Trenchard-Smith and Enid Schantz-Hagelberg, of the local River City Singers choir, volunteered to help lead the song.

Towards the end of the event, in coordination with the worldwide effort, the St. Helens crowd, young and old, gathered under the gazebo to light their candles and sing “This Little Light of Mine.”

PHOTOS / Voices of Change: The role of multimedia

One time my dog ate a balloon. I smelled a flower and watched Hill St. Blues. Don McClure cooked me French toast for late night supper.

PHOTOS / Voices of Change: The role of multimedia