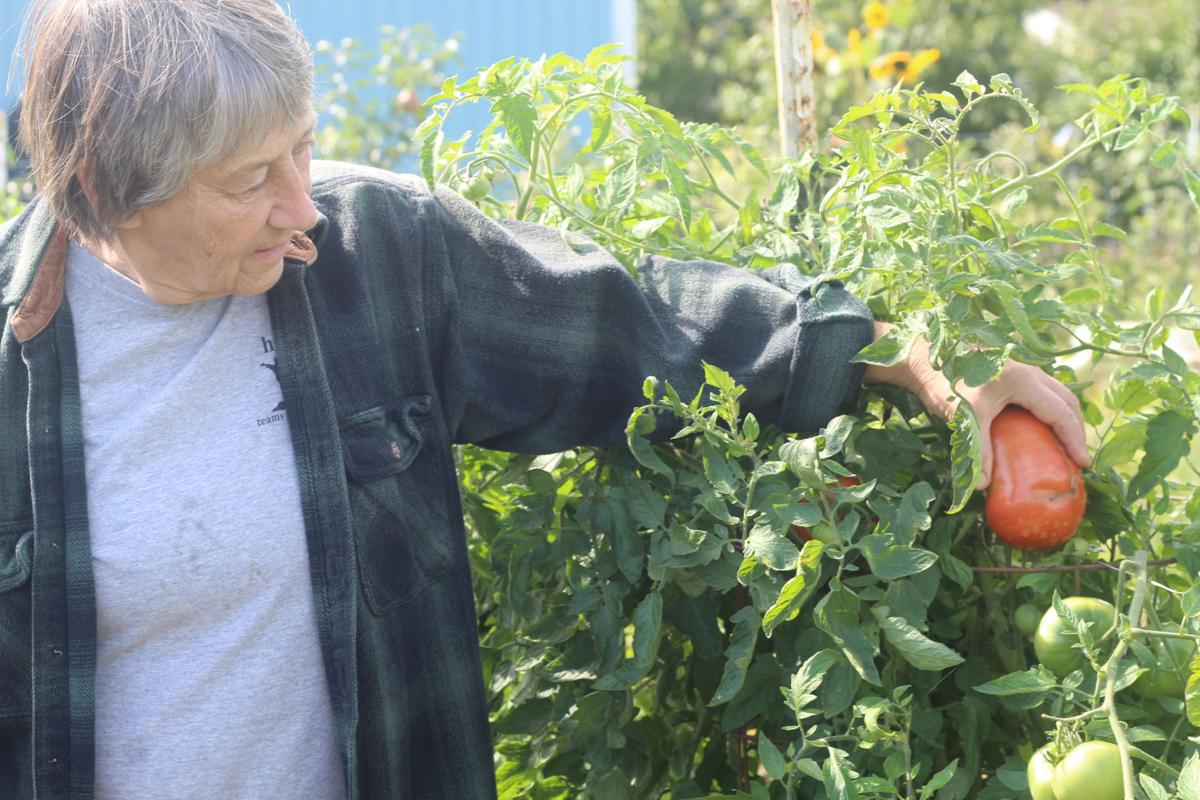 Linda Snyder holds a large tomato hanging from a vine at the couple’s home garden. 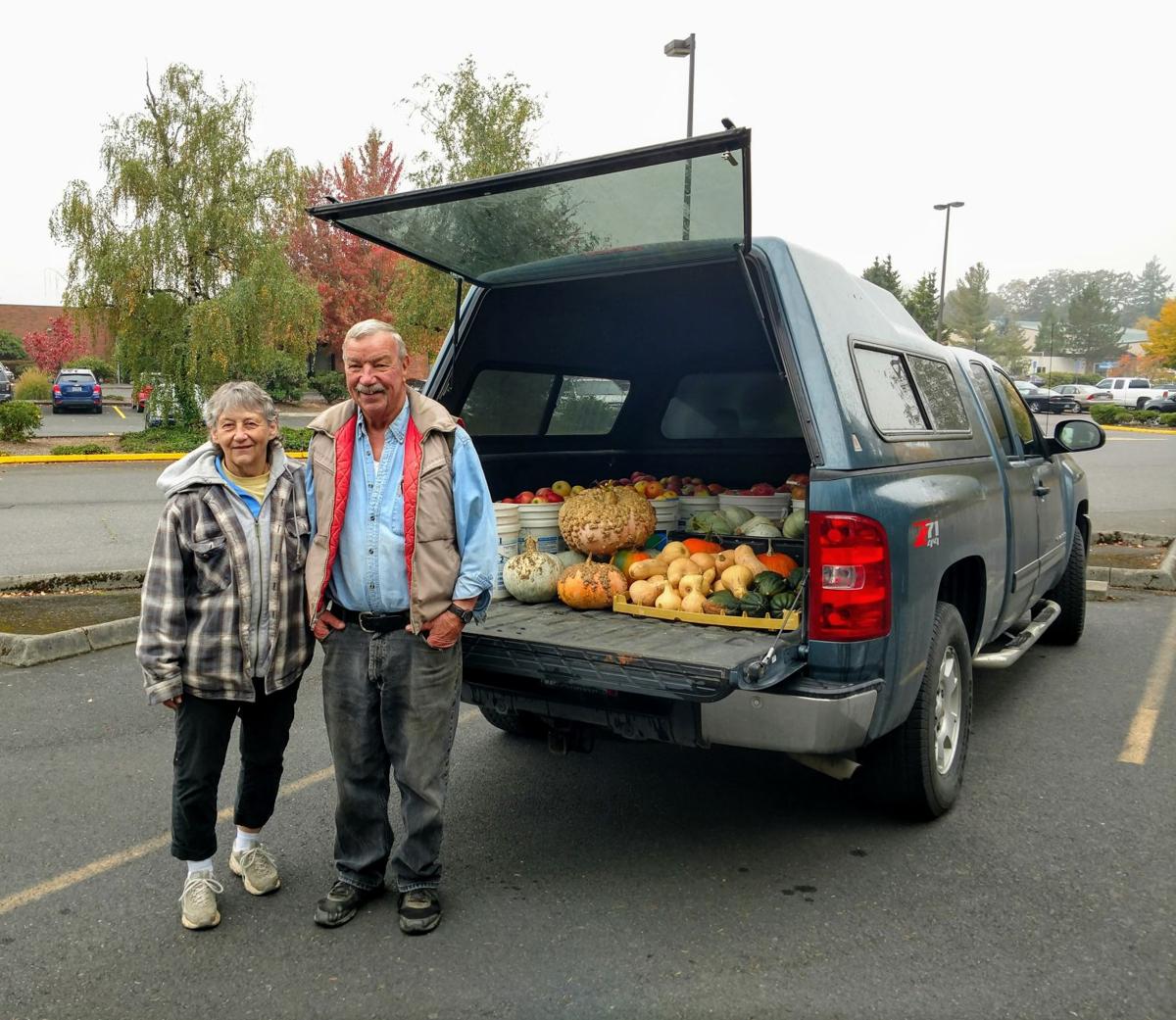 Linda and Denny Snyder stand in front of their car filled with produce that they will donate to the Columbia Pacific Food Bank.

Linda Snyder holds a large tomato hanging from a vine at the couple’s home garden.

Linda and Denny Snyder stand in front of their car filled with produce that they will donate to the Columbia Pacific Food Bank.

At the Master Gardener Demonstration Garden at the Columbia County Fairgrounds, a facility and program run by the Oregon State University (OSU) Columbia County Extension Service, Dennis Snyder, who goes by Denny, frequently plants and harvests crops. On a recent Monday morning, he took out a big batch of sweet potatoes that he had recently harvested. With the exception of one that looked like it had been attacked by a vole, the rest of them will be donated to the Columbia Pacific Food Bank (CPFB), like a lot of the crops that Denny and his wife, Linda grow.

A Master Gardener since 2003, Denny has been growing and donating food back to the community for a long time. Now retired, both Denny and Linda, who became a Master Gardener this spring after taking the course, spend a lot of time maintaining the Demonstration Garden, teaching gardening workshops in the community and growing and donating food to CPFB from their own two-acre farmstead which they maintain at their home in Warren.

According to Sonia Reagan, who manages business operations at the OSU Extension Service, from 2003 to 2018, Denny logged over 2,635 volunteer hours with the Master Gardener program. He also donated over 11,000 thousand pounds of produce to CPFB from 2010 to 2018. Reagan said Denny also averages about 150 volunteer hours a year with the Master Gardener program.

The Demonstration Garden aims to educate the public about gardening techniques, design, new plant varieties and other topics in gardening. Walking around the plot of land, Denny pointed out the many different varieties of plants growing, some of which will soon be ready for harvest. These included grapes growing in bunches on the vine, pumpkins, cabbage, tomatoes, strawberries, sweet potatoes, peppers and onions.

“It’s just very satisfying to know that you passed on the knowledge and stuff so somebody else is able to do some of the things that you enjoy,” Denny said.

In addition to teaching classes through the OSU Extension program and donating crops to the food bank, Denny is working to preserve lost apple tree varieties by visiting old orchards and grafting and propagating seedlings.

Denny, who was raised on a farm, was always inspired to grow his own garden when he retired. He has done just that, volunteering hundreds of hours each year at the Demonstration Garden, as well as making his own two-acre garden with his wife at their home.

“I grew up on a farm and my goal was to retire early enough that I could get some property and raise a garden,” he said. “I’ve always had a garden, but now I can have one as big as I want it and sometimes bigger than I wanted.”

The garden and fruit trees that Denny and Linda work on at their home are even more impressive. Walking through it, one can quickly forget that this is a backyard and not another traditional farm in Columbia County. One item that Linda pointed out was a ginormous, overripe tomato dangling from a vine. Peering through the vines, one can also see bulging orange pumpkins, green vines looping into the ground. Beyond those sit similarly ginormous white squash.

Aside from plants that grow in the ground, there are many other types of fruit in this backyard that grow on vines or in trees. Those include the sunflowers that loom over the garden, each tilted toward the sun and hundreds of different types of apples, including a rose apple, which is pink when cut into.

“They’re really good for fruit salads because they don’t turn brown,” Denny said. “Even if I took a piece of that and left it on the counter overnight, it still looks just like that.”

The other products that yield from this garden are almost too numerous to mention. Denny said there are about 50 different products, including onions, lettuce, cabbage, cauliflower, broccoli, cane berries, melons, persimmons, paw paws, pears and many others. Denny said he does not have a favorite crop to produce, but did say that one of the most rewarding aspects is picking right from the garden to make one of his favorite sandwiches.

“One of the joys is a good bacon, lettuce and tomato sandwich with the fresh tomato out of the garden. You can’t buy it in a store. You cannot do that,” Denny said.

Denny’s and Linda’s enormous garden serves as a classroom for students in the OSU Extension Service’s Master Gardeners program, where they often provide hands-on pruning demonstrations for classes that average about 25 trainees. With the ample yield from their apple trees, Denny and Linda also invite friends and acquaintances over for making apple cider in the fall every year.

Reagan said she was impressed by both Denny and Linda since the day she met them. She said Denny often stops by the OSU Extension Service office and gives the staff their pick before donating the rest to CPFB.

“He’s been doing it for a long time, and it’s a magically generous thing he does a couple times a week,” Reagan said. “He’s donating most of that produce, making a big impact.”