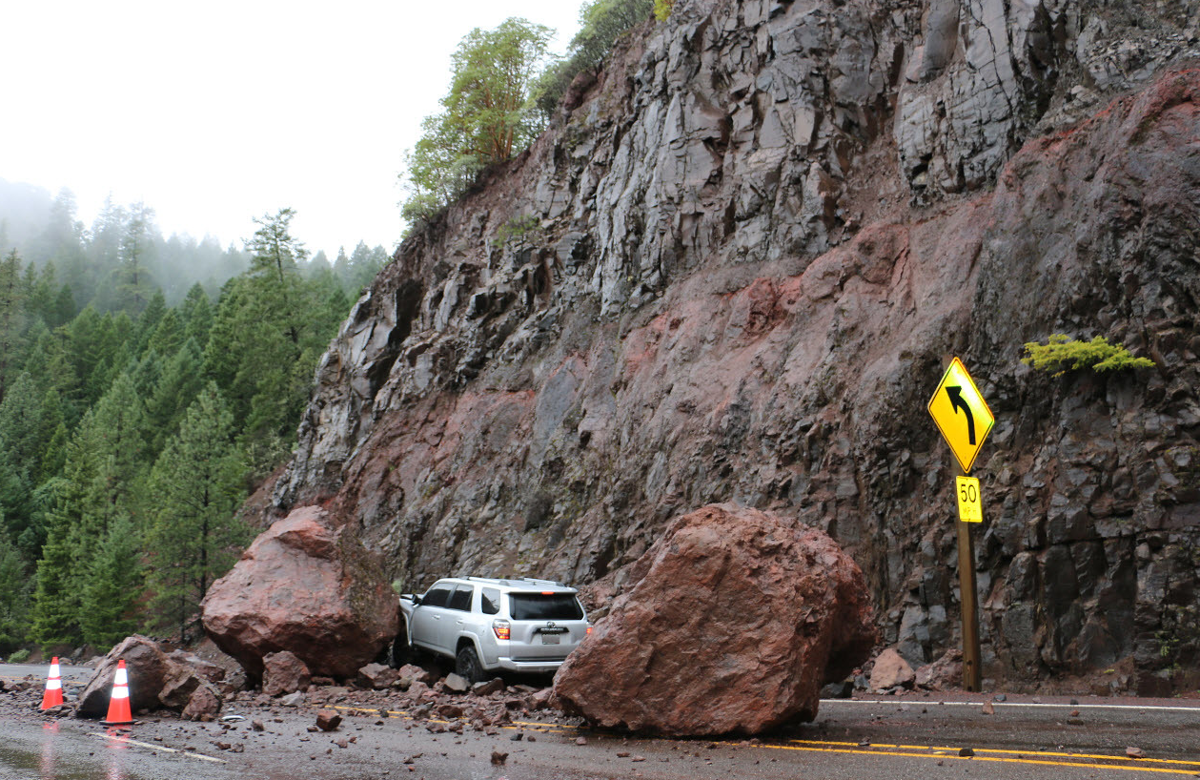 This landslide brought down huge boulders that almost crushed this car on Highway 62 near Prospect. The slide is one of the latest examples of the danger from such events in Oregon. 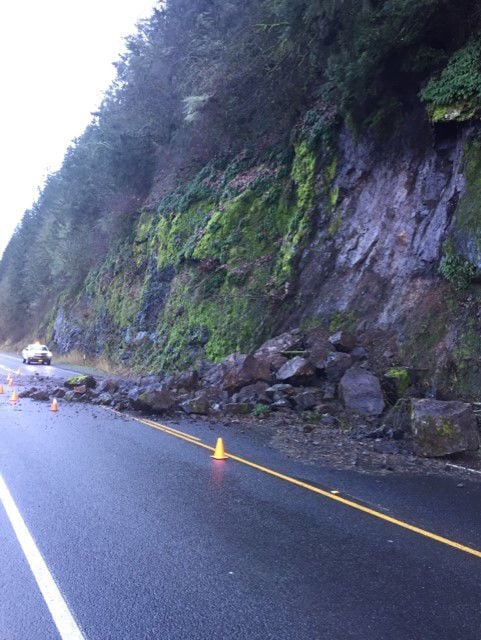 This rock and debris slide occurred in the winter of 2017-18 along Highway 30 west of Clatskanie.

This landslide brought down huge boulders that almost crushed this car on Highway 62 near Prospect. The slide is one of the latest examples of the danger from such events in Oregon.

This rock and debris slide occurred in the winter of 2017-18 along Highway 30 west of Clatskanie.

The parade of rainstorms flowing across Oregon and into Columbia County is increasing the risk of landslides, according to state officials.

The danger statewide is evident in the latest photos of huge boulders that nearly crushed a car along Highway 62 near Prospect in Southern Oregon to a landslide that closed the Historic Columbia River Highway this week between Multnomah Falls and the Angel's Rest trailhead in Northwest Oregon.

According to Robert A. Houston with the Oregon Department of Geology and Mineral Industries (DOGAMI), landslides are caused by a combination of factors, including the type of geology, the slope, and usually water.

“With repeating storms, the soils do not have enough time to drain and so the water builds up in the soil and leads to failure or a landslide,” Houston said.

“The areas that have had landslides before (historic and prehistoric or ancient) are the areas of first concern,” Houston said. “This is because landslides tend to happen in the same places repeatedly through reactivation or the combination of factors talked about in the above question.”

Oregon Department of Transportation spokesman Lou Torres said ODOT is also keeping a close watch on the landslide potential in Columbia County following the parade of rainstorms this winter.

Torres said there are a number of areas on all of the Coast Range highways that are being monitored daily for slides by ODOT crews, including on Highway 30 at milepost 33 and milepost 39 between Columbia City and Rainier.

"These are two potential problem areas but there are others," Torres said. "A major rockfall repair in 2018 solved a problem we had at milepost 63 just west of Clatskanie. However, we still get occasional rocks and debris that fall on to the road."

Torres said the major rock fall mitigation work at the milepost 63 site was a $1.3 million project to scale back the rock cliffs above that were causing rock slides, which closed lanes of Highway 30 over the years.

"But most of the time we are cleaning up the slides,” he said. “On occasion, when our geologists are analyzing a particular slide area, we will use some scientific instruments placed at locations."

According to Torres, the slides along the Coast Range routes and Highway 101 are caused by heavy rain that saturates the soils.

“That, combined with the steep slopes and weak underlying rock formations, are the main causes of the slides, rock falls and slumps,” he said.

Slides are part of the geologic history of Northwest Oregon, according to Torres, and drivers using the Coast range routes and Highway 101 should take precautions.

“Slides can occur at almost anytime on these highways," Torres said." However, during periods of heavy rainfall, travelers should recognize that there is a higher likelihood that slides can happen. Travelers should slow down, drive carefully, pay attention to their driving which means avoid distractions, and watch for hazards."

According to DOGMI, average annual repair costs for landslides in Oregon exceed $10 million, and severe winter storm losses can exceed $100 million. As population growth continues and development into landslide susceptible terrain occurs, damage and loss from this natural hazard will continue to grow.

"During periods of heavy rainfall, travelers should recognize that there is a higher likelihood that slides can happen."

A slide forced the closure of the Historic Columbia River Highway Thursday morning between Stark Street and Woodward Road near Troutdale.

Ecola State Park, along the North Coast of Oregon, is closed until further notice due to a damaged section of the park’s sole entrance road.