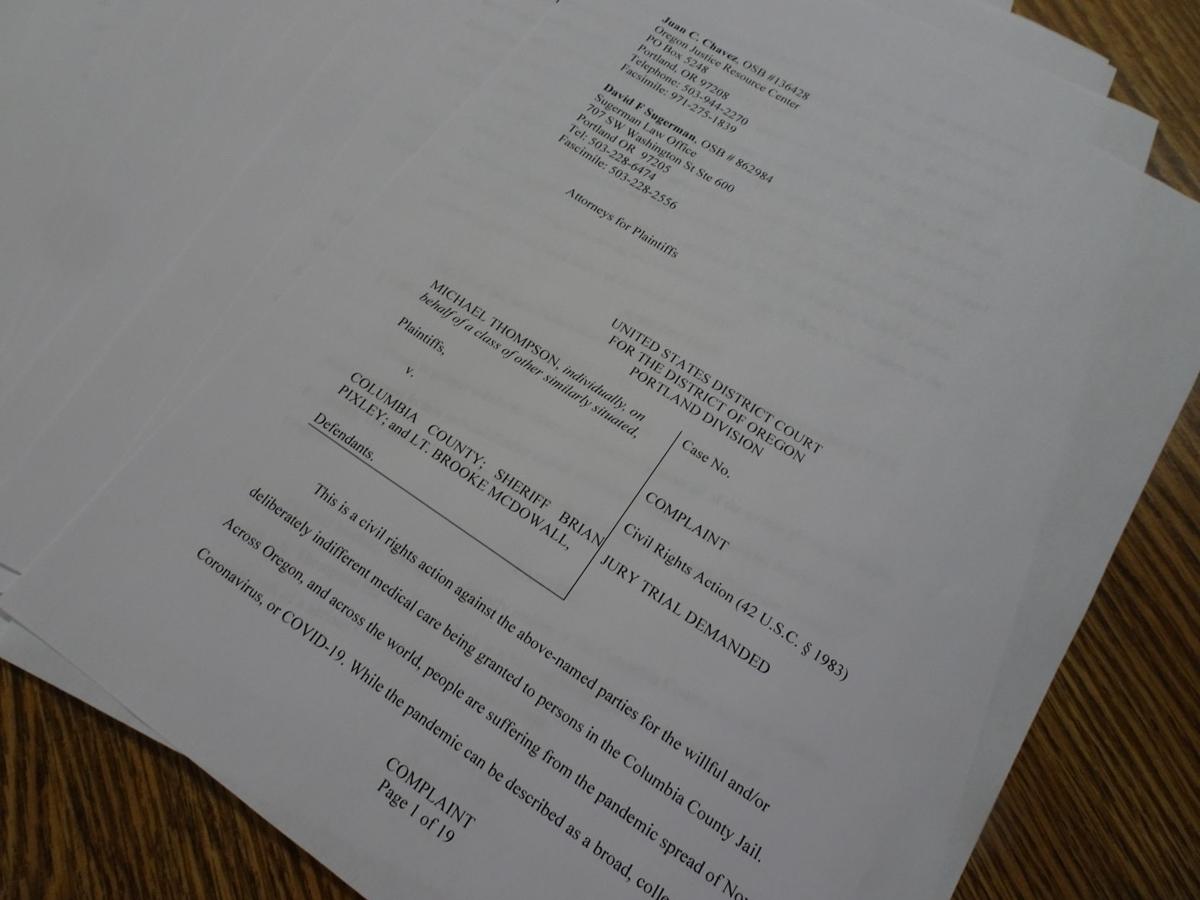 The 19-page coronavirus class action lawsuit against Columbia County has been filed in federal court in Portland. 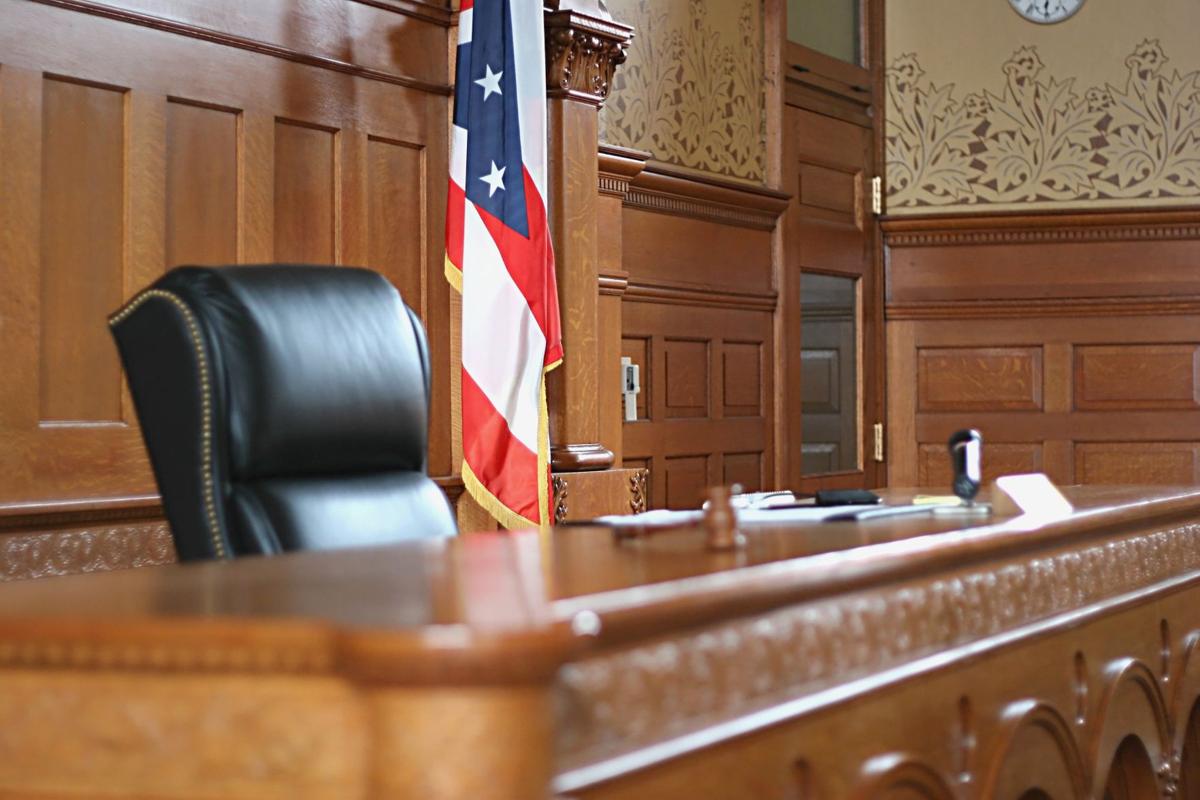 Columbia County officials told The Chronicle that they cannon comment on pending litigation.

The 19-page coronavirus class action lawsuit against Columbia County has been filed in federal court in Portland.

Columbia County officials told The Chronicle that they cannon comment on pending litigation.

An inmate at the Columbia County Jail has filed a class action federal lawsuit against Columbia County, Columbia County Sheriff Brian Pixley and Columbia County Lt. Brooke McDowall, seeking release from the jail based on his vulnerability to the COVID-19 outbreak and the jail’s alleged failure to meet healthcare needs.

According to the lawsuit, inmate Michael Thompson has a medical condition that the Centers for Disease Control have identified as making him more likely to suffer serious health consequences from the coronavirus, particularly if he does not receive the care needed to properly treat the infection. (See the formal complaint attached to this story).

According to the Columbia County Jail inmate roster, Thompson was jailed on March 9 and charged with assault, burglary, coercion, menacing, strangulation, theft, theft by extortion and unlawful use of a weapon. His bail is set at $95,000.

Thompson has filed the lawsuit against Columbia County; Sheriff Brian Pixley; and Lieutenant Brooke McDowall, jail supervisor; on the grounds that the class’s rights are being violated by inadequate medical care at the jail. The class includes people who are vulnerable to a severe COVID-19 infection.

According to the director and attorney for the Civil Rights Project of the Oregon Justice Resource Center Juan Chavez, Thompson has pre-diabetes, asthma, and suffers from congestive heart failure and is therefore at increased risk of serious health consequences and even death. He is not exhibiting symptoms of coronavirus. Despite his increased risk, he is still being housed in a dorm, at close quarters with three other people, Chavez said.

“The close quarters at which people in jail are forced to live present a perfect breeding ground for the spread of a highly contagious disease like COVID-19," Chavez said. “During this pandemic, people in jail need to be able to live socially distant from one another. They can’t do that while the jail is nearly at capacity.”

The Oregon Justice Resource Center is representing Thompson and filed the lawsuit on March 24 at the Federal Court House in Portland.

Chavez told The Chronicle the Center learned about Thompson’s situation through his criminal defense attorney. Chavez said a timeline for action on the lawsuit is still pending.

“Every case is different, but we’re hoping to get in front of a judge soon with a temporary restraining order,” he said.

In a release, The Oregon Justice Resource Center states it has learned that people incarcerated at the Columbia County jail are not receiving the services and supplies they need to prevent disease.

“Recommended measures such as frequent handwashing, cleaning of living areas, adequate space to socially distance, and masks people showing symptoms are not being followed. People incarcerated at the jail sleep in four-person cells on two sets of bunk beds. Inmates rarely spend time at a distance further than six feet from each other. The only cleaning supplies the jail provides are part of a small hygiene kit that includes a bar of soap, shampoo, a comb, a toothbrush, and toothpaste,” the Center’s release reads.

The Center also said in addition to the close contact with others that is often difficult or impossible to avoid for incarcerated people, jails present other conditions that increase the risk of a COVID-19 outbreak. They house vulnerable populations with higher rates of the medical conditions that make serious health consequences from infection more likely. Jails often provide scant medical care to their inhabitants.

According to the Center, experts in correctional public health are recommending that jails and prisons reduce their populations to aid in maintaining social distancing. In Washington County, Columbia County’s neighbor, the jail had released 121 people as of March 17 to help keep people safe.

“It’s important to remember, as every Oregonian acts to prevent the spread of this disease, that an outbreak in a jail or prison is unlikely to stay there,” said Chavez. “Correctional officers, staff, and others entering and leaving these facilities all have the capacity to take COVID-19 out into the wider community. We are all only as safe as the most vulnerable among us.”

Chavez told The Chronicle the lawsuit results could have far-reaching impacts on jails and the well-being of inmates.

“Since this is a class action suit, we are asking for changes for all the people jailed in CCJ in a similar predicament as Mr. Thompson,” Chavez said. “The advice from the CDC and the Oregon Health Authority is straightforward: keep a distance of more than six feet away from others, and up your hygiene and sanitation. The jail needs to make that happen or people could die. Other jurisdictions, like Washington County and across the country, have taken the threat seriously and made these changes. Columbia County has a choice now: change, or have a public humanitarian crisis on their hands.

The Chronicle has contacted Sheriff Brian Pixley and Columbia County Commissioner Alex Tardif for comment about the lawsuit. Both told us that they could not comment on pending litigation.

The Columbia County Jail is located at 901 Port Avenue in St. Helens.

Follow developments here online and in the Wednesday print editions of The Chronicle.