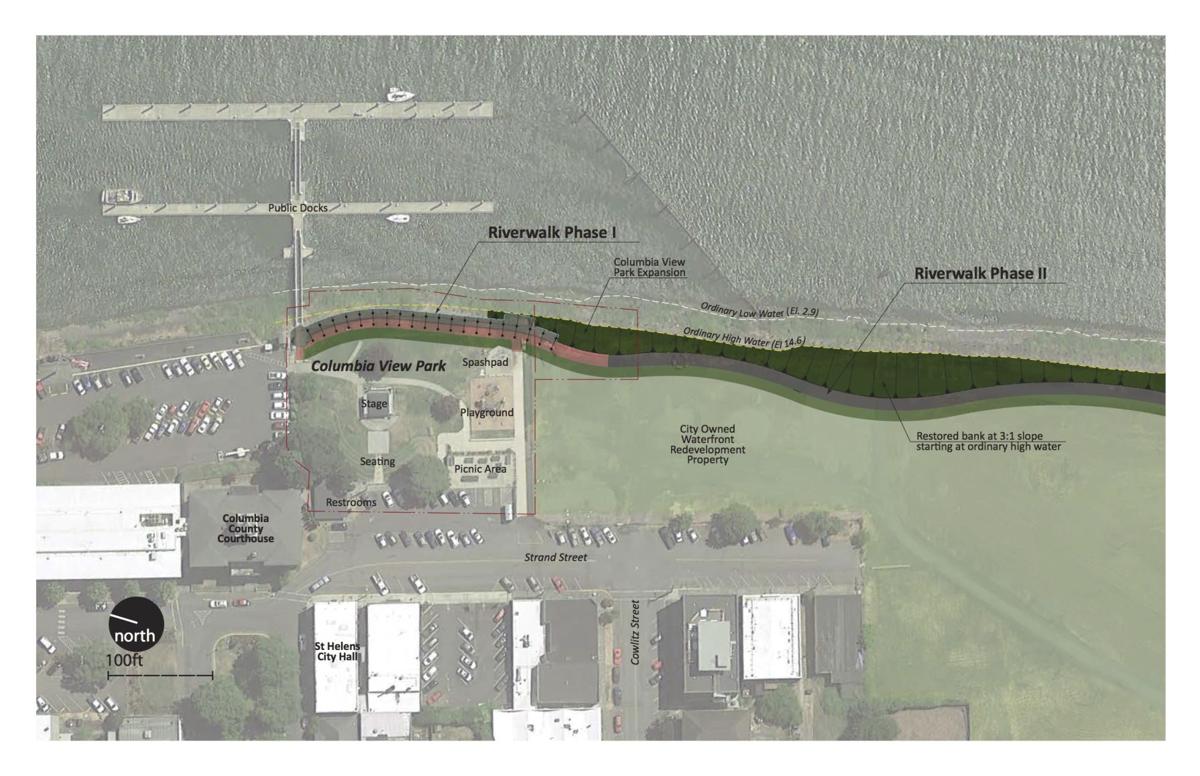 This photo shows the route of the St. Helens Riverwalk along the Columbia River. 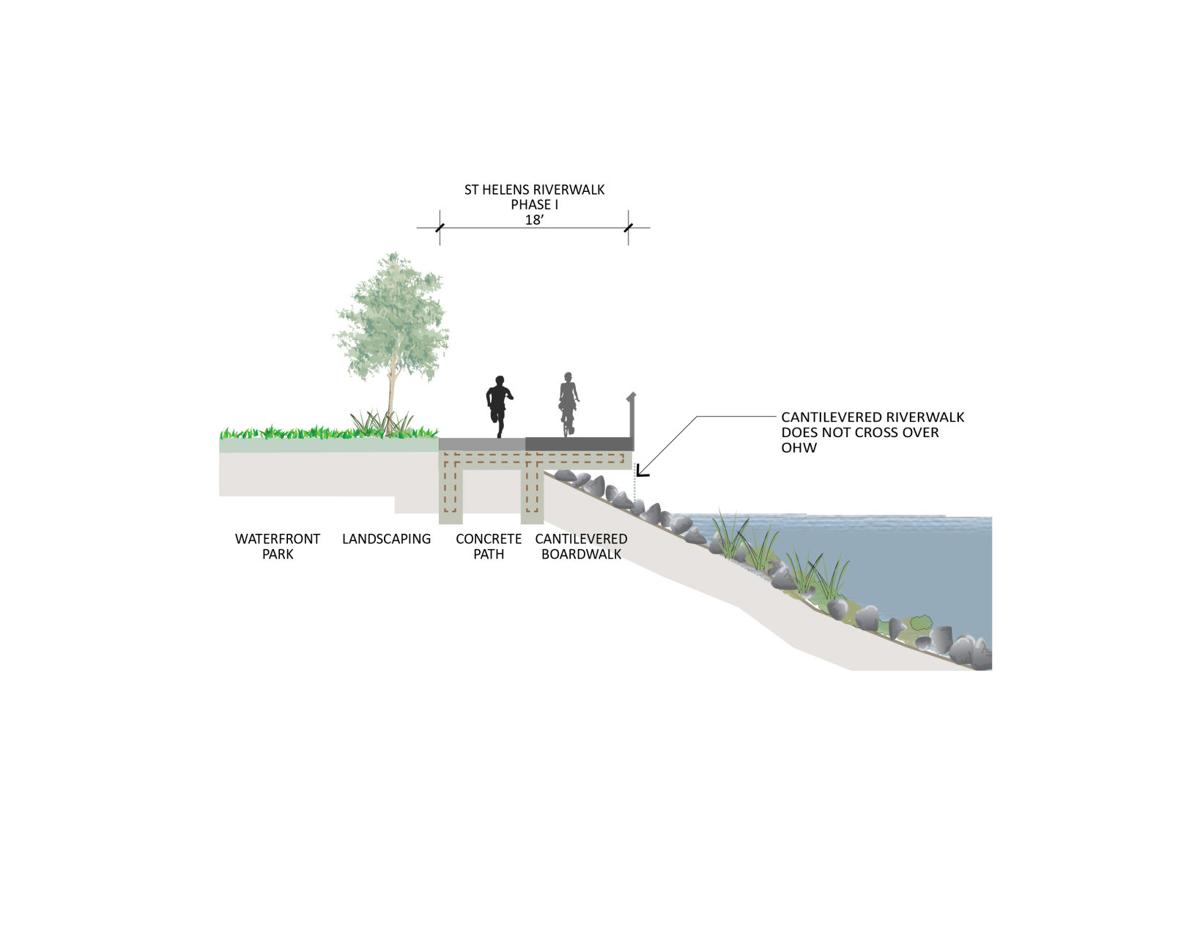 This conceptual drawing shows the St. Helens Waterfront Park connection to the Riverwalk.

New plans and drawings are emerging from city hall giving the community a better vision of proposed development along the Columbia River at St. Helens.

In the following conversation with The Chronicle, St. Helens Communications Officer Crystal King provides us with the latest details.

The Chronicle: In late February we reported, "Unti recommended immediate next steps of the project would be for city staff to price the cost of the now-reduced infrastructure in order to have a preliminary figure for funds to be raised for Phase 1 of the project."

Has City staff accomplished the pricing and what is that pricing?

King: The St. Helens riverfront redevelopment project is a once in a lifetime opportunity to redefine St Helens as a desirable destination community. The city’s acquisition of the property in 2015 secured the community’s interest and provided the opportunity to ensure the public interests in the redevelopment. Over the past several years, city staff have been working to secure funding to construct the road connections, boardwalk and trails along the river and other public amenities that will benefit the public and attract quality development in the riverfront district.

The city has made two unsuccessful attempts at obtaining federal funding and is currently preparing a third submittal to the BUILD (Better Utilizing Investments to Leverage Development) program. This submittal shifts the primary focus more on the street connections (First Street to Plymouth and Strand to First Street) and less on the boardwalk along the river.

Funding for the boardwalk is being pursued through other state and local programs. The current infrastructure estimate is approximately $19 million.

The Chronicle: Who will be responsible for raising the needed funding and where will it come from for Phase 1 of the project?

King: The City of St. Helens is seeking funding from state and federal grant sources and, pending the award decisions, will be evaluating low-to-no interest loans to cover any remaining expenses for the infrastructure costs.

The Chronicle: How many phases would there be with such development and what would the time frame be for the phases?

King: The riverfront redevelopment project is large and complex. Since there are many projects within the overall development, there will likely be many phases depending upon funding availability and private development interest in the site. The initial efforts have been to secure funding necessary to make roadway connections, expand Columbia View Park and construct a permanent board walk/river walk trail along the riverfront.

There has been substantial planning, community engagement and interest in the project to date and funding is the primary barrier to moving forward with construction. The city’s funding strategy has been attempting to secure infrastructure funding from state and federal sources to leverage local funds and minimize financial impacts to the community.

The time frame for proceeding with Phase 1 construction depends on funding.

King: The riverfront redevelopment project encompasses the area from the First and St. Helens Street intersection southward through the mill site to the connection at Plymouth Street. The Riverfront District, in addition to the former Boise Veneer Mill property, includes the existing development along First Street and the historic district.

The former mill site is approximately 22 acres with a value to the City of St. Helens community that cannot be overstated. While the current assessed value of the former Veneer Property is $898,710, this does not include the value to St. Helens’ future.

The Chronicle: There have been several ideas discussed about what could be developed at the riverfront. In the city's public discussions about what should be developed, what has the city heard from residents, property owners and businesses about what they'd like to see and what is the city council's current vision for the property?

King: The Riverfront Framework Plan was founded on extensive community engagement and citizen involvement. The plan goals include ensuring public access and connection to the river, creating transportation connections (both motorized and non-motorized), preserving cultural heritage and providing opportunity for economic development.

The Framework Plan is intended to be flexible while embracing these overarching plan goals. The city is currently exploring a public private partnership proposal for plans to construct an elevator serviced mixed use building, boutique hotel and restaurant.

The Chronicle: What are the next steps that city needs to take to get its riverfront development off paper and to become a viable economic driver for our city?

King: The city is actively seeking funding to construct the infrastructure improvements and turn the plan into reality. Funding is the next major step. While grant applications are pending, work towards preparing the site for redevelopment will continue. Tasks such as topographical and geotechnical studies, subdividing the mill site parcel into development-ready lots and completing the park/boardwalk infrastructure design are included in the St. Helens City Council Strategic Workplan for 2020-2022.

The City has announced Wilsonville Concrete Products (WCP, Inc.) as a new private partner whose vision aligns with the City’s goals for the ri…

Portland-based architect firm Mayer / Reed has been selected for the design and construction of the St. Helens riverwalk project.

Weather: How much snow will fall?

Pandemic: Oregon pushes ahead with teachers next on vaccination schedule

Weather: How much snow will fall?

Pandemic: Oregon pushes ahead with teachers next on vaccination schedule