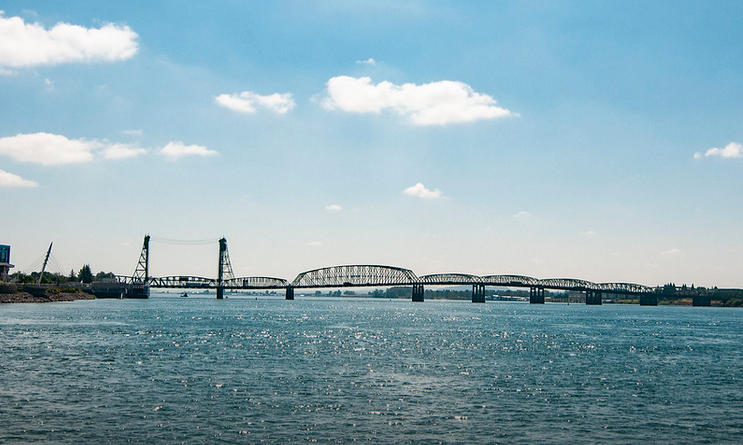 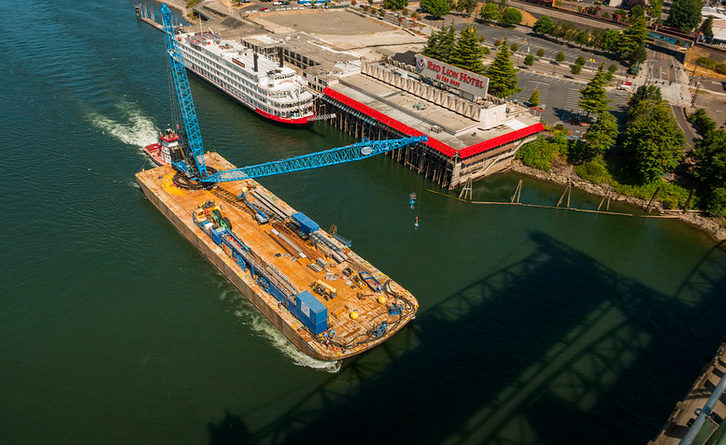 The barge that will be used during the work approached the Interstate Bridge. 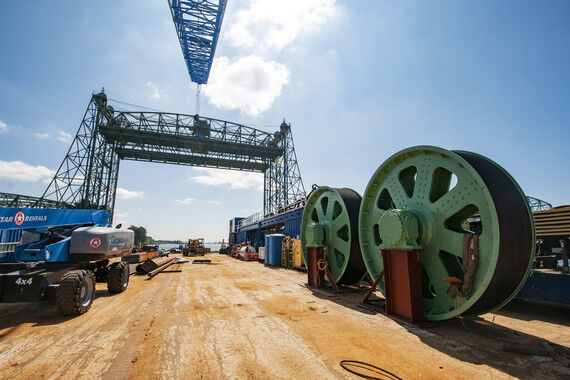 Many of the components needed to replace mechanical parts in the south tower, including sheaves, shown at right in above photo, cables and trunnions, arrived at the Interstate Bridge on Tuesday, August 4. This equipment helps raise and lower the lift span.

Overhead view pf the sheaves and the barge looking down from the Interstate Bridge.

ODOT has rescheduled the start of the I-5 Interstate Bridge Trunnion Replacement Project for Sept. 19 following its postponement because of wildfires.

The northbound span had been set to close at 12:01 a.m. Saturday to replace major components of the lift mechanism on the 1917 span. The project will keep the northbound structure closed for nine days.

On Thursday evening, ODOT postponed the work to help keep the roads as clear as possible for wildfire evacuees and emergency responders.

On Friday, after consultation with WSDOT, the construction team, the U.S. Coast Guard and other stakeholders, ODOT announced it would begin the closure one week late with closure of the northbound span beginning at 12:01 a.m. Saturday, Sept. 19. The schedule could change depending on conditions.

"This project needs to get done within the window of our Coast Guard permit and while the river level remains low," ODOT manager for the Portland area Rian Windsheimer said.. "It's time to get prepared for this closure and make a plan to avoid the expected congestion."

The Interstate Bridge along Interstate 5 from Portland to Vancouver is key transportation link between Oregon and Washington that spans the Columbia River.

It is used by thousands daily to get from one state to the other and is a critical economic path for products and business connections into and from Columbia County and the surrounding region.

Beginning this month crews will begin needed work on the bridge and the northbound span will close from September 12–20, 2020 as crews replace mechanical parts that help lift and lower the bridge.

On Tuesday, Aug. 4, the specially fabricated bridge components arrived on a barge at the Interstate Bridge, the end of a long journey from an Alabama foundry.

While the heaviest impacts will occur during the closure of the northbound span of the bridge and the following 7-day lane closure on I-5 south, the project began in August and continues through October.

Beginning mid-August, travelers should expect nighttime lane closures on I-5 and the Interstate Bridge, up to 30-minute bridge lifts on I-5 north, and nighttime ramp closures for traffic control on the following ramps:

During the 9-day closure Sept. 12-20, travelers crossing the Interstate Bridge in both directions will share the three lanes and the sidewalk on the southbound span. Movable concrete barriers will allow two lanes of traffic to travel in the heaviest direction, with two southbound lanes open for the morning commute and two northbound lanes open for the afternoon commute. The sidewalk on the southbound span will remain open at all times to people walking or riding bicycles.

After the closure, travelers will experience a single lane closure on I-5 south at the Interstate Bridge Sept. 21-27 as construction crews remove equipment from the area.

Last week, ODOT sent updates to more than 20,000 homes adjacent to I-5 in Portland and Clark County to provide more information about traffic impacts during construction. The public should expect increasing bridge closure messages on social media, web advertising, radio spots and emails.

Travelers can help reduce congestion during the project by delaying or shifting trips to less congested times, taking transit or working from home or another location. Transit users can take advantage of expedited travel times with Bus on Shoulder programs on SR 14, I-5 and I-205. Learn more at c-tran.com/bus-on-shoulder.

About the Interstate Bridge

The Interstate Bridge is jointly owned by Oregon and Washington and is maintained and operated by ODOT. The northbound span opened in 1917 and the southbound span in 1958.

The bridge closure is scheduled for September in part due to the low river levels, which allow most vessels to travel under the Interstate Bridge without a bridge lift. This is essential for marine traffic, because the Columbia River is an international shipping channel.

In response to the ongoing fire emergency affecting the region, the Oregon Department of Transportation has postponed the I-5 Interstate Bridg…

A major span across the Columbia River that connects important economic traffic to and from Columbia County closes Saturday, Sept. 19 for impr…