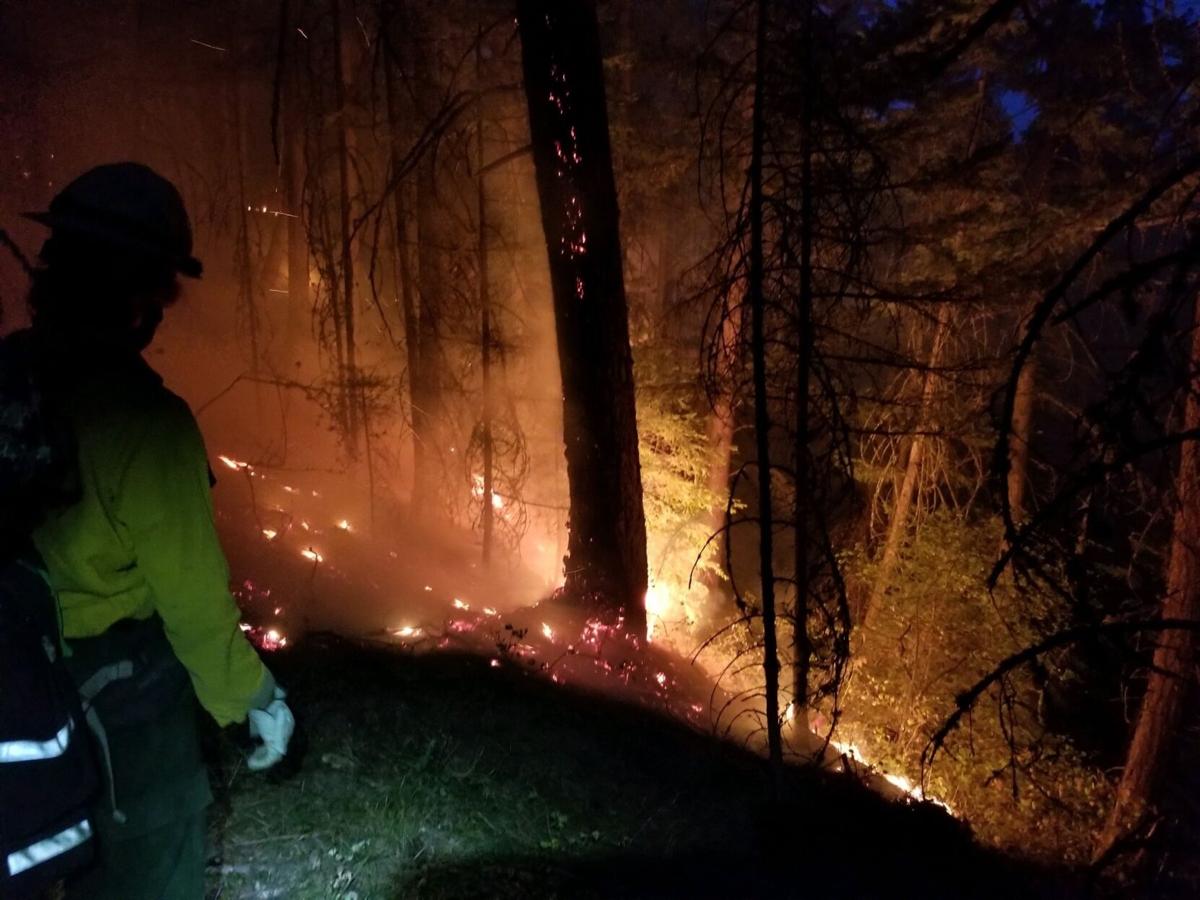 The Mosier Creek Fire is burning along steep hillside areas. 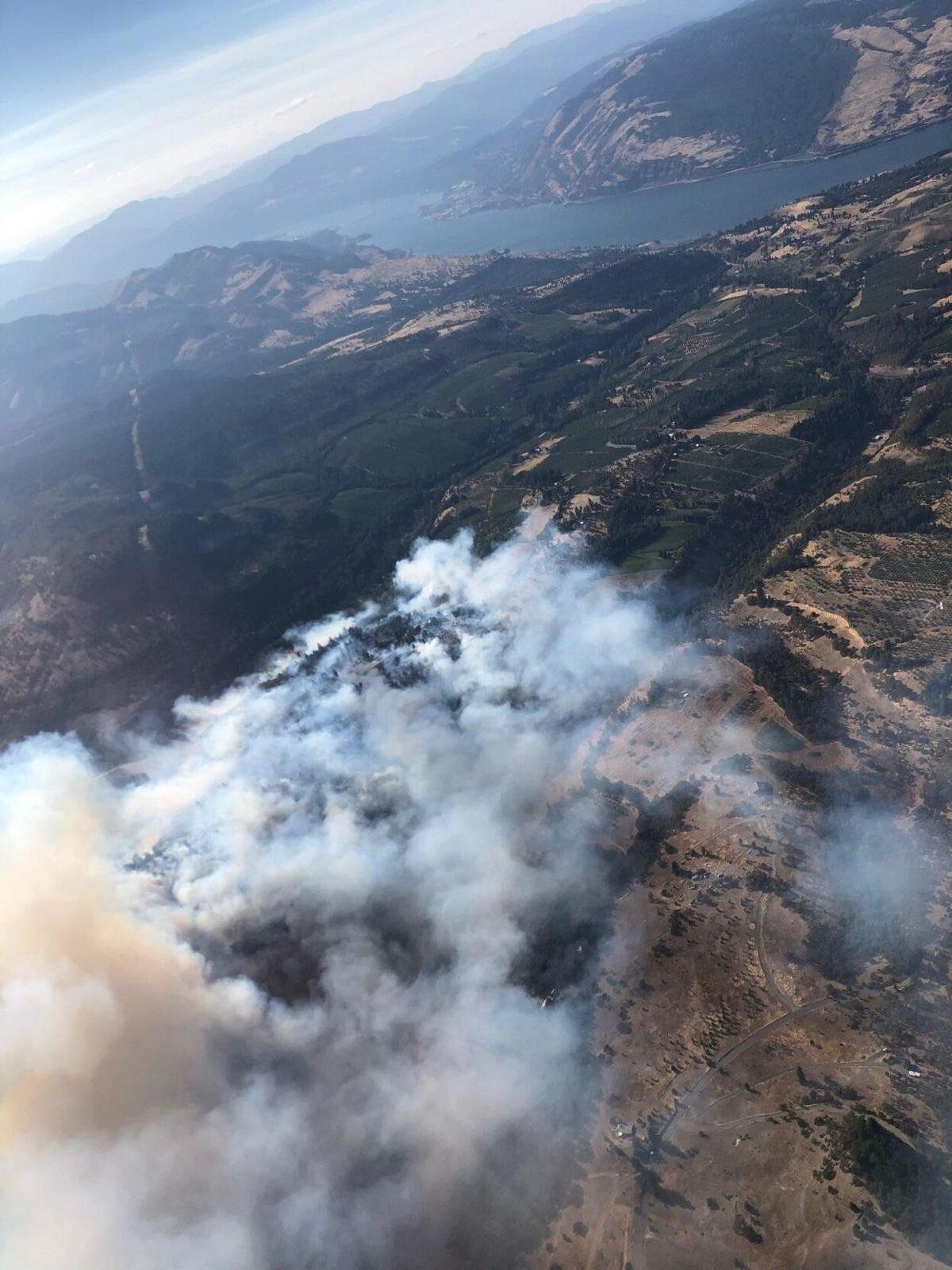 This flyover shows the immense smoke rising from the Mosier Creek wildfire.

An 800-acre wildfire near The Dalles in the Columbia River Gorge is believed to be human caused, according to the Oregon Department of Forestry ODF.

The Mosier Creek Fire is also threatening evacuations and has prompted a health advisory.

The fire is currently threatening 300 homes, and residents of Osburne Cutoff, Vensel, Catron, Dry Creek, Carroll, Morgenson, and from Chenoweth Airport to Vensel/Ketchum road are on level 3 evacuations.

Columbia River Fire & Rescue officials report that fire crews from Columbia County fire districts assembled at the Scappoose Fire station this morning and are heading to the fire scene to assist.

Active fire behavior in some areas of the wildfire has hampered fire crew's efforts to establish containment lines overnight, according to the ODF.

Firefighters are working to strengthen the fireline and continue direct tactics to establish lines around the fire. Crews on the ground were set to be supported by large air tankers and helicopter water drops.

"With high temperatures and weather conditions helping fires grow quickly, I have invoked an emergency declaration to make more state resources available to the fire crews on the front lines in Wasco County and the Columbia River Gorge at the Mosier Creek fire," Brown said. "I ask Oregonians to remember that preventing wildfires is critical this year, especially as we have fire crews on the frontlines during this pandemic. Be cautious and honor all burn bans, and keep our fire crews in your thoughts as they fight to protect our communities and the landscapes that surround them."

In accordance with ORS 476.510 - 476.610, Governor Brown determined that a threat to life, safety, and property exists due to the fire, and the threat exceeds the firefighting capabilities of local firefighting personnel and equipment.

Fire danger levels will be on the rise in Oregon, with a warming trend this weekend into next week. Residents are asked to take extra precautions to prevent human-caused wildfires. Oregonians are encouraged to take extra care when preparing for road trips and outdoor adventures that include securing and maintaining vehicles before hitting the road and checking on all campfire and local restrictions at intended destinations.

The Oregon Department of Environmental Quality has issued an air quality advisory for The Dalles-Mosier-Hood River area due to smoke from the Mosier Creek Fire.

DEQ expects the air quality advisory to last until at least Saturday morning, and potentially longer. DEQ will continue to monitor smoke in this area.

Smoke levels can change rapidly depending on weather. Check current conditions on DEQ’s Air Quality Index or by downloading the free OregonAIR app on your smartphone.

Smoke can irritate people’s eyes and lungs and worsen some medical conditions. Young children, adults over 65, pregnant women, and people with heart disease, asthma or other respiratory conditions are most at risk.

The Federal Emergency Management Agency (FEMA) has authorized the use of federal funds to help with firefighting costs for the Mosier Creek Fire burning in Wasco County, approximately 70 miles northeast of Portland.

FEMA Region 10 Administrator Mike O’Hare determined that the fire threatened to cause such destruction as would constitute a major disaster. He approved the state of Oregon’s request for a federal Fire Management Assistance Grant (FMAG) at 11:49 p.m. PDT on Wednesday, Aug. 12.

The fire started on Wednesday and had burned in an area exceeding 300 to 500 acres of private land at the time of the state’s request, with zero percent containment. Also at the time of the request, the fire was threatening 300 homes and critical communications infrastructure near the community of Mosier Creek. Mandatory and voluntary evacuations have been issued for approximately 415 homes.

FMAGs are provided through the President's Disaster Relief Fund and are made available by FEMA to assist in fighting fires that threaten to cause a major disaster. Eligible items can include expenses for field camps; equipment use, repair and replacement; mobilization and demobilization activities; and tools, materials and supplies.

In addition to reimbursement funding for fighting the fire, $629,681 in mitigation assistance will be available to Oregon. The Disaster Recovery Reform Act of 2018 authorizes FEMA to provide Hazard Mitigation Grant Program (HMGP) Post-Fire funds to eligible states and territories that receive Fire Management Assistance declarations and federally recognized tribes that have land burned within a designated area.

FEMA encourages HMGP Post-Fire funds be used for the mitigation of wildfire and related hazards, such as flood or erosion. However, HMGP is available for risk reduction of any hazard.